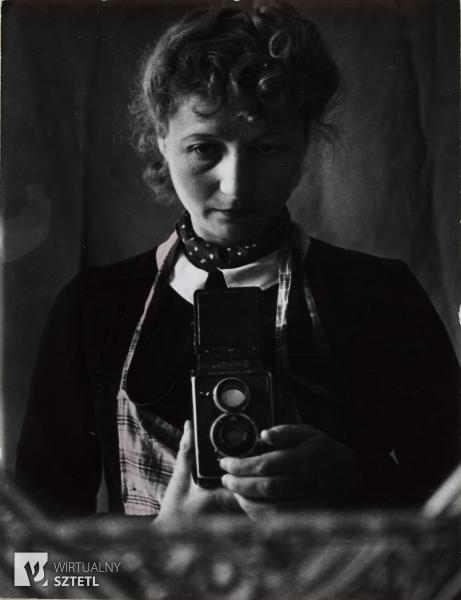 “I like to photograph people, especially young people - children. I like sadness, it's more photogenic than joy.”

She was born in Końskowola as the second daughter of Sara née Szejnfeld and Baruch Diament who was running a small trade business. She had an older brother, Majer (he died of typhus in a Soviet labour camp, in 1943) and a younger sister, Mindla (murdered by the Gestapo in a Wrocław prison in 1944).

After the death of her mother and the remarriage of her father, the family moved to Warsaw. Poverty and the hardship of growing up (life in poverty, malnutrition, her family could not afford to pay for children’s education) forced her and her siblings to work at a very young age, and also made her actively involved in communist activities within the structures of the Communist Party of Poland (Polish: Komunistyczna Partia Polski - KPP), which had been illegal since 1920. In 1920 or 1921, the sisters were imprisoned. Mindla, released two years later, emigrated to France in 1933. Julia, after serving four years, left Poland in 1934 to join her sister.
Due to disease she remained in Brussels, where she was helped by the left-wing organization dealing with political refugees - Secours Rouge. In 1935, she married Jean Pirotte, a workers' activist, and thus obtained Belgian citizenship.
She stayed in Belgium until 1940. She worked at a metal structure factory in Uccle. She participated in strikes and workers' rallies, attended photography and journalism courses as a free student. In 1939, she left for the Baltic countries to work for the Foto Waro agency but had already published the first photo reports on the everyday life of Polish miners in Charleroi, published in the Belgian communist newspaper Drapeau Rouge.

After the Germans entered Belgium in 1940, Julia found herself in Marseilles; she was separated from her conscripted husband (as it turned out, forever). Equipped with a Leica camera donated by Suzanne Spaak, she earned a living, among others by "beach photography" – taking photos of the sunbathers. Noticed, probably during this work, she was hired as a photojournalist for the Dimanche Illustre weekly. She took photos of artists visiting Marseilles. A very well-known portrait of Edit Piaf comes from this period.

Throughout all her years in Marseille, Julia Pirotte was active in the resistance movement. She played an important role as a liaison officer and courier in the FTPF-MOI (Erancs-tireurs et partisants-main d'œuvre immigrée) organization. She also fought, perhaps most of all, with her camera, capturing both everyday life and military actions of the French resistance movement as well as the lives of the poorest inhabitants of Marseille under the Vichy rule, mainly labourers. She took pictures of the Bompard transit camp for Jewish women and children who were later deported to the German Nazi Auschwitz concentration camp. She photographed the town, which was deserted after the displacement of its inhabitants, including approx. 2,000 Jews, the destroyed district of Old Port. Her photos from France Under Occupation series, smuggled into the United States by a Czech courier, were published anonymously in the American press,.

In 1944, an uprising broke out in Marseille. At that time Julia Pirotte took her most famous photos of the city

“The uprising began on August 21 at 3 pm. At 3.30 pm we captured the prefecture building and then, crouching behind the wheel of a car, I took pictures of the first partisan attack on escaping Germans. Actually, I was uninterruptedly photographing all the time, until the end”.

Pirotte returned to Poland at the beginning of 1946. She became a correspondent for Żołnierz Polski (Polish Soldier weekly), was a co-founder of the Military Photographic Agency (Polish: Wojskowa Agencja Fotograficzna). On July 5, 1946, at the request of this publication, she was the only photojournalist to take over 100 photos documenting the pogrom of Jews in Kielce. Most of the negatives were confiscated by the State Security Office (Polish: Urząd Bezpieczeństwa Publicznego).

“PS. Sorry for the poor technical quality of the photos. Three Leica films (118 negatives) were stolen from me. I made new negatives from small samples. As it seems to me, I was the only journalist and photojournalist in Kielce.” Seven photos appeared in the 27th issue of Żołnierz Polski weekly, from 19-25 July 1946, as an illustration of the articles entitled Kieleckie biesy (Kielce Demons), Kielce – to problem Polski (Kielce - this is a problem of Poland) and Wstyd ostateczny (The Ultimate Shame)

From the period of photojournalism in post-war Poland, Pirotte's significant and well-known achievements are the portraits of prominent representatives of the European left including Irena Joliot-Curie, Dominique Desanti, Pablo Picasso, Paul Eluard and Hewlett Johnson, who came to Wrocław for the World Congress of Intellectuals that took place in 1948.

In the 1940s and 1950s, she mainly shot propaganda photos of the post-war reconstruction of Warsaw, workers' rallies, parades, but also of the ruins of Warsaw, miners returning from Lille to Katowice, Jewish pupils from orphanages in Otwock and residents of provincial towns.

In 1958, she married Jefim Sokolski, an economist who returned to Poland from Soviet labour camps after 21 years.

From 1968 she was falling into or maybe condemned herself to oblivion. This lasted until 1979, when she sent her Marseille archive to the photography festival in Arles. The photos were received with enthusiasm and the author received the award of the city of Arles. In the following years, her works were presented at many significant exhibitions, mainly abroad. Notwithstanding her great photojournalistic achievements, she remained underappreciated in Poland. Despite many recommendations, she lost her candidacy for a membership of the Association of Polish Art Photographers.

In 1996 she was awarded the French Order of Arts and Letters. That year, the documentary Julia Pirotte, was made. It was directed by Maria Wiśnicka

Julia Pirotte died in 2000. She is buried with her husband in the Powązki Military Cemetery in Warsaw, plot no. C33. Most of her legacy is in the Musée de la Photographie in Charleroi, which holds the copyright to her works. A year before her death the documentalist donated 471 photographs to the Jewish Historical Institute.