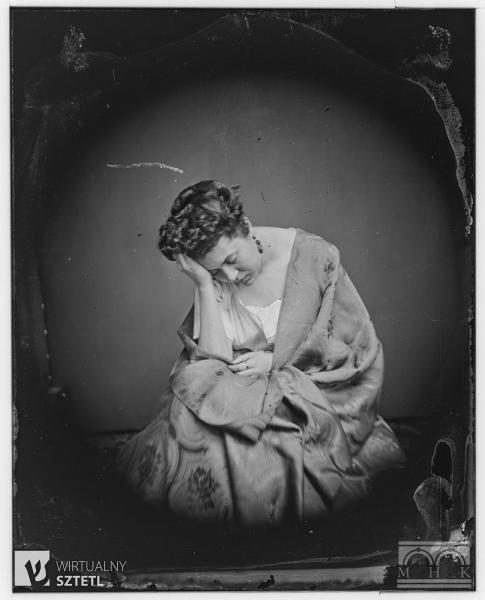 "She was known in wide artistic and civic circles not only of the city of Krakow, but also throughout Poland, and she attracted universal sympathy because of her qualities of character and artistic education.. (…) She devoted her entire life to photographing statues and monuments (...) of her beloved city of Krakow and all over Poland. With extraordinary diligence and reverence, sparing no hardships and efforts, she collected more and more new glass plate negatives and thus enlarged the collections bequeathed to her by her father and brother.” [[ref.:|"Nowy Dziennik", no 260 from 27 September 1928, p. 9]].

Krieger Amalia (1846, Lipniki – 21 September 1928, Kraków) – one of the first Polish female photographers, the owner of a photography studio.

Amalia Krieger was born in 1846 in Lipnik, Bielsko County, as one of five children of Ignacy and Hanna Thieberg.

Around 1860, the family moved to Kraków, where Ignacy opened a photography studio in a townhouse at 1 Świętego Jana Street. After the death of her father, Amalia and her brother Natan inherited a reputable atelier with a large collection of photographs on glass plates. They ran the studio together until Natan's death in 1903. As the sole owner, Amalia continued the family business until 1926.

She was a member  of The Society of Friends of Kraków History and Heritage. She shared her photos of Krakow's monuments with the "Rocznik Krakowski" (Kraków Yearbook) published by the Society.

She collaborated with the Academy of Learning in photographing the oldest Polish documents under the supervision of professors W. Semkowicz and S. Krzyżanowski, and also with art historians. She photographed works of art by recognized artists as well as the creators of younger generation (including Vlastimil Hofman, Tymon Niesiołowski and Mieczysław Jakimowicz).

In 1926, two years before her death, she closed the atelier and handed over the collection of thousands of  and studio equipment to the Municipality of Krakow. She also established the Ignacy, Natan, Amalia Krieger Foundation, whose aim was:

Amala Krieger died on September 21, 1928. The funeral was attended by representatives of leading municipal institutions, including the President of Krakow Karol Rolle.

By the decision of the city authorities, Amalia's precious gift went to the Industrial Museum. dr. Adrian Baraniecki, then to the Library of the Academy of Fine Arts, and in 1967 finally to the Historical Museum of the City of Krakow. The collection consists of 5,410 photographs.