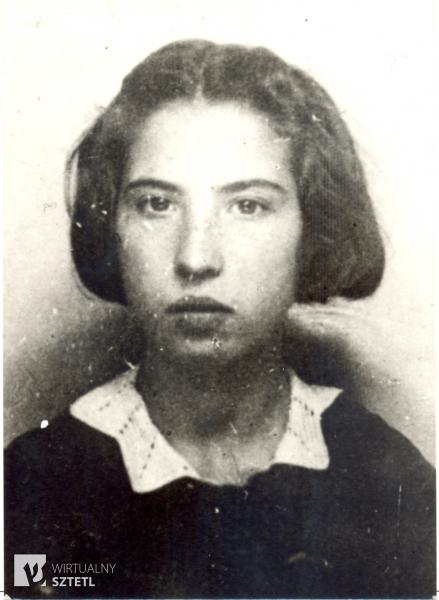 She was born in Warsaw in 1920. Her exact date of birth is unknown. She was a member and activist of HaShomer HaTzair, a Zionist youth organisation. It was probably in its ranks that she met Mordechai Anielewicz. Shortly after the outbreak of World War II, she and Anielewicz left for Vilna. They returned to Warsaw in January 1940 and were transferred to the ghetto in November of the same year.

Inside the ghetto, Mira Fuchrer worked in a tailoring co-operative together with Towa Frenkel and Rachel Zylberberg. She was an active member of the Jewish Combat Organisation since its very inception. Working as liaison for the ŻOB command, she would venture out to ghettos outside of Warsaw. In February 1943, she took part in the robbery of the Judenrat cashier’s office (37 Nalewki Street). Her task was to transfer the 100,000 zlotys obtained from the office to the headquarters of the ŻOB. The mission was successful.

During the Warsaw ghetto uprising, Mira Fuchrer fought in the area of central ghetto alongside Mordechai Anielewicz. They both died on 8 May 1943, in the bunker of the uprising command at 18 Miła Street. This is how Marek Edelman recalled these events: “Anielewicz had a girlfriend, a pretty, bright, warm girl. On 7 May, he brought her to our place, at Franciszkańska Street. On 8 May, he shot her and then himself at Miła Street.”[1.1]

On 2 April 1948, the Executive Council of the Union of Jewish Participants in Armed Combat against Fascism (Polish: Związek Żydów Uczestników Walki Zbrojnej z Faszyzmem) submitted a request to posthumously award the Cross of Valour to Mira Fuchrer. The statement of reasons read: “A member of the Jewish Combat Organisation, Mordechai Anielewicz’s companion in combat, distinguished by her extraordinary heroism. She died in the bunker of the ŻOB headquarters at 18 Miła Street.” On 19 April 1948, by the decision of President Bolesław Bierut, Mira Fuchrer was awarded the Silver Cross of the War Order of Virtuti Militari.