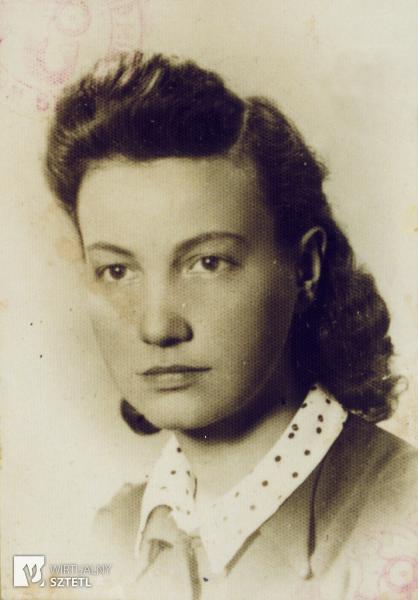 She grew up in the Bundist milieu of Warsaw’s Praga district. In 1921, she joined the Tsukunft youth organisation. Her parents were Chana and Szlomo Peltel, she had a sister Henia and a brother Chaim.

She lived in the ghetto together with her parents and younger siblings. After Władka’s father died of pneumonia, the family moved to 66 Leszno Street. Władka was soon forced to move out in order to avoid being arrested for her involvement in the resistance movement. Despite her efforts, she did not manage to save her loved ones – her mother and siblings were deported to the Nazi German extermination camp in Treblinka.

In accordance with the decision of the Jewish Combat Organisation, she reached the “Aryan side” of Warsaw on 5 December 1942. She was tasked with organising help for Jews imprisoned in ghettos and those hiding outside the closed district. She worked as an activist of the Jewish Coordination Committee, a joint body representing the majority of Jewish political groups and established in cooperation with the Polish resistance movement. She took part in the operations of smuggling children out of the Warsaw ghetto, providing them with shelter, and paying Polish families who decided to take them in. Feigele was able to successfully work undercover thanks to her “Aryan appearance” – naturally straight blonde hair and greyish-green eyes – as well as false documents issued under the name Władysława Kowalska. She kept the first name assumed during the occupation until the end of her life.

In 1942, she reported to the representatives of the Polish Underground State on the deportations of thousands of Jews from ghettos and their mass murder in death camps. She also passed on accounts detailing the operation of the Treblinka extermination camp, collected from the few surviving witnesses.

During the preparations for the Warsaw ghetto uprising and after its outbreak, Feigele smuggled weapons, explosives, and petrol for the production of Molotov cocktails. She used a Kennkarte issued for Stanisława Wąchalska, the deceased daughter of Władka’s trusted Polish collaborator Anna. She also helped deliver money, clothes, and information to the few surviving insurgents from the Warsaw ghetto who had gone into hiding in the surrounding forests and joined the partisan movement. In the summer of 1943, on behalf of the Coordination Committee, she travelled around the country and delivered medicine, money, clothes, and information to Jews imprisoned in the last operational labour camps. She continued to keep in touch with her former charges during the Warsaw uprising.

In 1944, Feigele Peltel married Benjamin Międzyrzecki, an active member of the Bund and the Jewish underground who had helped her escape from the ghetto two years earlier. Having no hope of survival in the Polish capital, the couple decided to leave the bunker at the corner of Sosnowa and Sienna Streets and get out of Warsaw. Their old acquaintances helped them obtain “Aryan papers” and survive the following few months in the area of Grójec. The spouses returned to Warsaw after it had been seized by the Red Army, looking for any of their surviving relatives and friends. They then moved to Łódź, where Władka worked in the culture department of the Jewish Committee.

In 1946, she and her husband emigrated to the United States. They changed their surname to Meed. In 1948 in New York, at the time still known as Feigele Peitel-Miedzyrzecki, she published her memoir in Yiddish under the title Fun beyde zaytn geto-moyer (published in English as On Both Sides of the Wall: Memoirs from the Warsaw Ghetto). Years later, it was translated into many languages.

When in America, the Meeds were involved in social activities. Their initiative led to the establishment of the organisation of the veterans of the Warsaw ghetto resistance movement and the foundation of the American Congregation of Jewish Holocaust Survivors. Władka was vice-president of the Jewish Workers’ Committee in New York and headed the department dealing with Yiddish social and cultural activities. The spouses also made great contributions to Holocaust education. They helped spread awareness of the wartime experiences of Eastern European Jews among thousands of American students and gave teachers the opportunity to participate in educational seminars held in Poland. Over the years, Vladka Meed made hundreds of appearances in meetings, broadcasts, and conferences, repeating the words from her book: “Nothing was left me of my past, of my life in the ghetto, not even my father’s grave…”[1.1]