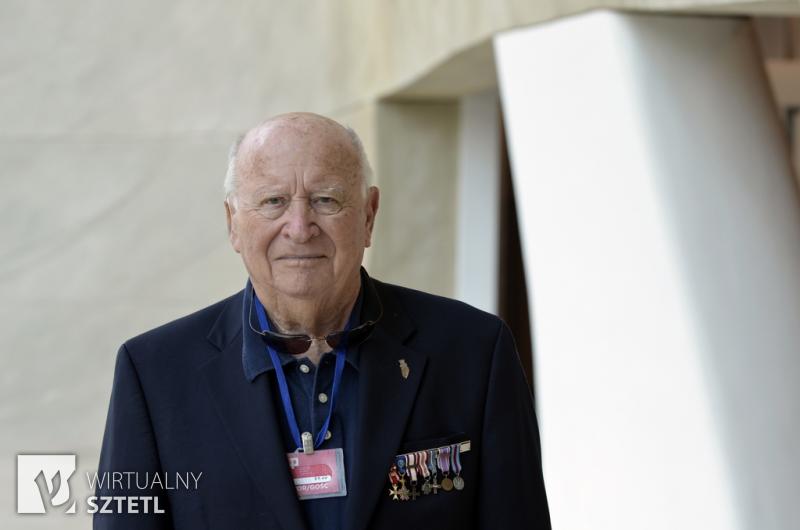 Aronson Stanisław, also: Shlomo Aronson, alias "Rysiek" (born May 6, 1925 Warsaw) - member of the Kedyw (Directorate of Diversion) "Kolegium A" unit of the Warsaw Area of the Home Army, participant in the Warsaw Uprising; after leaving Poland, a lieutenant colonel of the Israeli Defence Forces, participant in the first Israeli-Arab War, the Yom Kippur War and the War in Lebanon.

Stanisław Aronson was born into an assimilated Jewish family as the second child of Waldemar and Helena née Kafferman. His father was a merchant and industrialist operating in the textile industry. Mother, from Łódź, was a housewife. Until 1931, the Aronson family lived in Warsaw at 24 Senatorska Street, later they moved to Łódź and lived in a villa at 98 Żeromskiego Street. Staszek (diminutive of Stanisław) graduated from primary school and continued his education at the Polish Social Secondary School for Young Men in Łódź.

Shortly after the outbreak of World War II, the Aronson family wanted to return to Warsaw. Upon the news that members of the Polish government had been evacuated from the capital, the family decided to go east. Initially they stayed in the estate in Rivne, and at the end of 1939 - in Lviv. There, Stanisław continued his education at the Polish secondary school on Łyczakowska Street. In 1941, a few months after the Germans captured Lviv, Aronsons decided to join the rest of the family in the Warsaw ghetto. In the ghetto, teenage Stanisław worked on assembling Astrawerke AG counting machines and attended underground secondary classes. In autumn 1942, the whole family was driven to the Umschlagplatz, and from there into the wagons transporting Jews from the Warsaw ghetto to the extermination camp in Treblinka. During the deportation, Staszek was separated from his parents and older sister Janina. Taking advantage of the inattention of the Germans, he jumped out of the wagon when the train halted, and returned to Warsaw the next day.

From then on, with the help of friends and their network of contacts, he went into hiding on the so-called "Aryan side". Initially, he found shelter at a German woman related to his sister's friends, and with time he ended up in the home of Pilecki family, and under their influence he started sabotage activities. In December 1942 or January 1943, he swore an oath of allegiance to the Home Army and joined the Kedyw of the Warsaw Area of the Home Army (the so-called "Kolegium A" unit, "A" dispositional unit). He was active in the subversive and combat group "Andrzej" – under the command of 2nd Lt. Dr Józef Rybicki, and then in the "Żbik’s" unit commanded by Junior Warrant Officer Zdzisław Zajdler. As a member of the legendary "Kolegium A" unit led by "Żbik", he was in the execution group carrying out death sentences on people who were considered by the Polish Underground State to be collaborators. Due to his young age (he was 18 at the time), he did not carry out sentences - he participated in guarding and in identifying people sentenced to death. He also took part in attacks on the so-called kennels, i.e. German police cars transporting the imprisoned and caught in round-ups Poles.

Only his closest colleagues knew about his Jewish origins. Most of his acquaintances from the underground knew only his pseudonym, "Rysiek". Some were familiar with his name and surname - Ryszard Żukowski (previously: Żurawski); however, they did not know that these personal details also concealed his true identity. As a Pole who concealed his origins and previous experiences of the German occupation, "Rysiek" could see the Warsaw Ghetto Uprising only from a distance.

On August 1, 1944, the "Radosław" dispositional unit under the command of Lieutenant Stanisław Sosabowski "Stasinek", joined by "Rysiek", received an order to capture the Umschlagplatz. On the first day of the Warsaw Uprising, the unit succeeded in capturing warehouses of food and German uniforms located at 4 Stawki Street - the famous panterki (camouflage uniforms) recalled in the memories of Warsaw insurgents came from these warehouses. The same unit captured a school on Niska Street, from which about 100 Hungarian Jews imprisoned there were released. In the following days, "Rysiek" joined "Miotła", and then to "Zośka" - battalions belonging to the "Radosław" grouping. On August 10, in the area of Okopowa Street and Pfeiffer's tannery, his lungs and a leg were seriously injured as a result of a mortar fire. He was then transported from Wola district to the insurgent hospital in the Old Town, at 7 Długa Street. From his stay in the hospital, he remembered long conversations and the feeling of inevitability of the defeat dominating among the insurgents.

Years later, he judges the decision to start the Warsaw Uprising very harshly, although he underlines: “But I am talking about it many years after the war. During the Uprising and right after it, I didn't say that. We wanted an Uprising! - this order to conquer Warsaw " [[ref:| Cichoński M., Stanisław Aronson ps. „Rysiek”: Zakazałbym odzieży patriotycznej [online] https://kultura.dziennik.pl/ksiazki/artykuly/604101,stanislaw-aronson-rysiek-z-kedywu-wywiad-powstanie-warszawskie.html [access: July 20, 2021].]]. He recalls: “It wasn't that the whole nation, or even the whole of Warsaw, fought in the uprising. People were delighted for the first few days, maybe five days. Then there was a disaster. I was under the impression that everyone in Warsaw hated the Home Army because of the uprising. People did not realize what would happen" [[ref:|Jagielski P., Stanisław Aronson: nikt nie myślał, że powstanie okaże się taką katastrofą [online] https://kultura.onet.pl/wiadomosci/stanislaw-aronson-nikt-nie-myslal-ze-powstanie-okaze-sie-taka-katastrofa/86b7gv9 [access: July 20, 2021].]]. „Nobody knew that it would end in such a tragedy and disaster. Not so enormous! That Warsaw will disappear, that 150 thousand people would die, and the whole culture, monuments and libraries would go up in smoke. All heritage. At least I couldn't imagine that. Nobody could” [[ref:|Aronson S., Marat E., Wójcik M., Wojna nadejdzie jutro. Żołnierz legendarnego Kedywu AK ostrzega, Krakow 2019.]].

After the fall of the Old Town, "Rysiek" left Warsaw with a group of wounded and ended up in the hospital of the transit camp in Pruszków. After a short time, he escaped from there with his friend from "Kolegium A ", Olgierd "Remec" Cemerski. He found shelter in Wilanów. During his stay in a village near Warsaw, he visited the Branicki Palace several times. On the advice of an employee of the Red Cross from Wilanów, whom they met earlier, "Rysiek" and "Remec" fled to an estate in Dalechowice near Krakow, which belonged to their friend's aunt, Rena Rostworowska. On the Rostworowska’s estate, the friends were recovering, and it was there that, on January 16, 1945, they saw the arrival of the Red Army.

Stanisław Aronson, observing the behaviour of the Red Army soldiers in Dalechowice and remembering the unpleasant experiences in Lviv related to the Soviet occupation, decided to go to Łódź. Together with Cemerski, they took up residence on the first floor of the Aronson family house; soon after, two acquaintances from the underground - Leszek Rybiński and his pregnant wife Adka - moved into the two rooms they inhabited. Shortly after arriving in Łódź, he got into a conflict with an NKVD officer in a hairdressing salon, which could end up with being arrested by the Security Office. By taking advantage of the inattention of the officers, he escaped through the window of the room in which he was interrogated. In his hometown, Aronson enrolled in medical studies and joined the Niepodległość [Independence] ("NIE" [NO]) organization led by General August "Nil" Fieldorf, intended to be the heir of the Home Army under the Soviet occupation. Observing the uncertain situation in the country and the progressive repressions directed against the former members of the underground, he decided, despite the lack of Zionist convictions, to emigrate to Palestine.

In an organized group he travelled through Czechoslovakia to Hungary, where, as a Greek prisoner of a POW camp, he was sent to a transit camp in Budapest. The group with which he was to be transported by the Jewish underground across the Austrian border was detained by the Russians. Once again, taking advantage of their inattention, he broke away from the group and soon after crossed the border alone. Using the instructions of the English army, he reached a camp for refugees from the territories under Soviet control, located in Kragenfurt. Thanks to a Polish airman he met and with the support of the Red Cross, he was transported from Klagenfurt to Ancona in Italy, where he joined the 7th Carpathian Rifle Battalion of the 2nd Polish Corps under the command of General Anders. He served there for several months as a second lieutenant, and then he was transferred to the 2nd Battalion. In the meantime, he contributed to the expatriation from Poland to Great Britain of a distinguished officer of the Home Army Kedyw, Stanisław "Stasinek" Sosabowski. Not long after Aronson was admitted to the medical faculty of Padua University, his uncle Abram - one of the few surviving relatives - found him and persuaded him to leave for Palestine. For the next several months he served there in Polish auxiliary units; he was discharged from service in 1947.

Shlomo Aronson - for that is the name he has been using since his departure to Palestine – was not so fortunate to enjoy civilian life for a longer time and study biology at the University of Jerusalem. In 1948, he joined the Israeli army to defend the newly formed Israel in the First Israeli-Arab War (1948-1949). In 1950 he was demobilized as a captain. He also took part in subsequent armed conflicts: the Yom Kippur War (October 6 - 26, 1973) and the Lebanon War (1982 - 1985) and was promoted to the rank of lieutenant colonel. In Israel, he got married and settled permanently in Tel Aviv. There, he established a company selling books and records. With his wife, Margo Fratkin, they have two children: Lana and Matti.

For many years, due to political reasons, he could not visit Poland and meet his friends who lived there. Years later, in 1988, he visited Warsaw and participated in the 44th anniversary of the Warsaw Uprising. He was back there in 1990. At that time, he was demobilized from the Polish Army and regained Polish citizenship. He revisited Poland several times, the last time in 2019, when he took part in anniversary celebrations and visited well-known places: Warsaw, Łódź, Krakow.

Stanisław Shlomo Aronson lives in Tel Aviv to this day. He is still fluent in Polish, reads the Polish press regularly and is eager to speak up on matters relating to Poland, Polish-Israeli and Polish-Jewish relations.