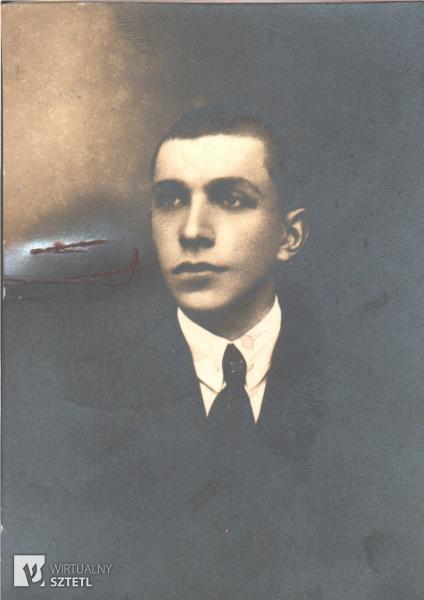 Michał Merliński - Personal data
Date of birth: 14th August 1903
Place of birth: Warszawa
Occupation: Member of the Main Board of the Polish Football Association, secretary of the Board in 1934−1937
Related towns: Warsaw

Michał's parents, Salomon and Sara (she also used the name Zofia) née Pejmerin, came from what is now Belarus. They were married in Warsaw in 1899. Salomon was a clerk; Sara ran dental surgeries in apartments at 10 Senatorska Street and 81 Marszałkowska Street. Michał's older brother, Józef (born on November 5, 1900), was a lawyer. He ran a law firm with his wife, Fanny (née Frydman, born 1902). Józef was arrested on January 25, 1940, in connection with the escape of Kazimierz Kott, and imprisoned in Pawiak. He was executed in Palmiry. According to the testimony given in Yad Vashem, Fanny perished in the camp in Poniatowa.

From 1912, Michał studied at the 5th high school in Warsaw. In the years 1915–1917 he attended R. Kowalski's school. He transferred to the A. Mickiewicz State High School (formerly E. Konopczyński High School) in Warsaw, where he passed his secondary school-leaving examination on June 12, 1920.

During the Polish-Bolshevik war, he undertook a three-month military service. In 1926, he began studies at the Faculty of Electrical Engineering of the Warsaw University of Technology. He graduated with a diploma in engineering on October 27, 1930. After graduating, he worked at the Warsaw Post and Telegraph Directorate.

During the occupation, he ended up in the Warsaw ghetto, where he probably held the position of a senior official in the Judenrat Post Department. Before the outbreak of the uprising in the ghetto, on the orders of the Jewish Combat Organization, he got through to the Aryan side. He was sheltered by his colleague from the Warsaw Post and Telegraph Directorate, Alfred Osmycki, who also acted as an intermediary in obtaining false documents for Merliński in which the name was Maliński. For fear of being exposed, Michał Merliński changed hiding places, staying with his old friends from university and workplace, including engineer Szparkowski and Stefan Kłosiński.

In unknown circumstances, Michał Merliński was arrested and placed in the custody of the Blue Police in Mokotów. Soon after, he was taken by the German police. His further fate remains unknown.