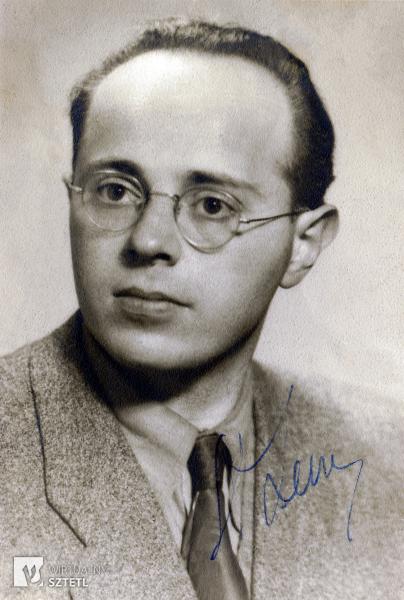 "During this period [after the German invasion of the USSR in 1941 – ed. note] in a very direct and ‘practical’ way, I learned that I am not an ‘Aryan’. My ancestors were Jews, although I had no idea about Judaism nor, unfortunately, about Jewish culture. Actually, only thanks to the Nazi legislation have I become aware that Jewish blood flows in my veins".[1.1]

Stanisław Lem (born on 12 (13?) September 1921 in Lviv, died on 27 March 2006 in Krakow) – writer, futurologist, literary critic. He completed medical studies, but never passed final exams and did not work in this profession.

Stanisław Herman Lem was born in Lviv. According to his birth certificate, he was born on 12 September 1921, but the correct date was apparently 13 September. As he himself recalled, the date was changed due to superstitions related to the number 13. He was the only child of Samuel and Sabina née Wollner. He was given his second name after his paternal grandfather.

Samuel Lem was a military doctor specialising in laryngology. He came from a large intelligentsia family using the surname Lehm. The Polonised version – Lem – first appeared in documents issued in 1904.[1.2] Samuel's younger sister was Berta Hescheles – mother of Marian Hemar. Sabina Lem née Wollner came from a poor family from Przemyśl. She was 13 years younger than Samuel. She was a housewife.

Stanisław spent his childhood in Lviv. The Lem family lived in a townhouse at 4 Brajerowska Street (currently the Ukrainian Bohdana Lepkoho Street, вулиця Богдана Лепкого). His parents considered themselves Poles of Jewish origin. Polish was spoken in the Lem family home, and a Christmas tree was decorated in December. At school, however, the future writer attended Jewish religion classes.[1.3]] In his later years, Lem described himself as an agnostic.[1.4]

He was a student of the Karol Szanojch Second State High School at 2 Podwale Street in Lviv (currently the Ukrainian Pidvalna Street, вулиця Підвальна). After school, he read a lot of adventure literature, as well as technical and even medical books. He designed his own inventions, including a steam powered airplane and front wheel powered bicycle.[1.5]

In 1939, he passed his secondary school-leaving examination, obtaining very good marks in all subjects.[1.6] After graduating from high school, he planned to study at the Lviv Technical University.[1.7] These plans were thwarted by the Soviet occupation of Lviv during World War II. Stanisław passed the entrance exam at the Technical University, but his application was dismissed due to his "bourgeois origin" (his parents owned two tenement houses, and his father had a university education). In 1940, after the rejection from the technical university, he began studies at the medical faculty of the Ivan Franko University (until January 1940 – Jan Kazimierz University) thanks to the connections of his father-doctor.

A year later, Lem’s studies were interrupted by the German invasion of the Soviet Union. Under the German occupation, he started working as a mechanic and welder in the German company "Rohstofferfassung", which dealt with the recovery of raw materials. Thanks to false documents, the Lem family managed to avoid imprisonment in the Lviv ghetto. Stanisław supported the Polish resistance movement by passing on ammunition obtained while working in the "Rohstofferfassung".

He continued his studies at the University of Lviv from the time the Soviet re-occupation of Lviv until the "repatriation" to Poland in 1946.

As a result of the resettlement, the Lem family moved to Kraków. They settled in Śląska Street. Meanwhile, they lost all their property left in Lviv. The family was supported by ailing Samuel Lem. Stanisław continued his medical studies at the Jagiellonian University. At the same time, he published his first novel, The Man from Mars, in the Nowy Świat Przygód magazine. Soon afterwards, he found his way to the editorial office of the Tygodnik Powszechny weekly, which published his short stories The Alien and A History of One Discovery and the poetic prose work Seventh Day (all of them in 1946). In 1948, he wrote Hospital of the Transfiguration, his first better known work. Also in 1948, the novice writer finished his medical studies, but did not pass the final exams. In the years 1948–1950 he worked as a junior assistant at the Konwersatorium Naukoznawcze (Scientific Seminars) of Assistants of the Jagiellonian University, run by Mieczysław Choynowski, PhD.[1.8]

In the first half of the 1950s, he met Barbara Leśniak – then a medical student. They got married in February 1954 in the Church of St. Peter and Paul in Kraków. Also in 1954, Stanisław’s father, Samuel Lem, died.

After breaking his ties with Tygodnik Powszechny, he published subsequent parts of Hospital of the Transfiguration – Among the Dead and Return. The publication of these novels was the result of the pressure of censorship, which ordered Lem to add communist themes to the story line. The entire trilogy, known as Czas nieutracony (Time Not Lost), was published in 1955. By that time Lem had gained the status of a popular writer. Czas nieutracony was published only twice more – in 1957 and 1965. The author did not agree to subsequent reprints of the second and third part.

After the publication of The Astronauts in 1951 and Czas nieutracony in 1955, a golden period in the career of Stanisław Lem began. In 1957, he published Dialogues and The Star Diaries. In 1959, Eden and The Investigation. In 1961, Memoirs Found in a Bathtub, Return of the Stars and, above all, his flagship novel Solaris, which is considered the author's greatest achievement. Published three years later were the novel The Invincible and Summa Technologiae – Lem's first philosophical work. In 1965, he published The Cyberiad, and in 1966 – an autobiographical novel titled Highcastle. In 1968, Tales of Pirx the Pilot and Głos Pana (The Voice of the Lord). In 1971, Doskonała Próżnia (The Perfect Vacuum), and two years later, Imaginary Magnitude. In 1976, he wrote Katar (translated as The Chain of Chance).

The first time that Stanisław Lem started to consider leaving Poland was after the events of March ‘68. However, he had a small child – son Tomasz, born in February 1968. He tried to leave after the declaration of martial law in December 1981. He finally managed to obtain a passport in the autumn of 1982, thanks to a scholarship he received from the Wissenschaftskolleg zu Berlin. During his stay in Berlin, the novel Wizja lokalna (translated into Observation on the Spot, 1982) was published. Unfortunately, at that time the author was not able to take his family abroad with him, due to which he eventually returned to Poland. In 1983, after martial law had been lifted, the Lem family finally emigrated to Vienna via West Berlin thanks to the invitation of the Austrian Writers' Union. When living in the Austrian capital, Lem published Peace on Earth and Fiasco (1987).

The Lem family returned to Poland in 1988. In 1991, the writer resumed cooperation with Tygodnik Powszechny. In 1996, Stanisław Lem was presented with the Order of the White Eagle. In 1998, he was awarded honorary doctorates from the University of Opole, Lviv State Medical University, and the Jagiellonian University. In 2003, a collection of Lem's articles written between 1992 and 2002 was published under the title Dylematy (Dilemmas).

Lem is one of the most famous Polish writers. His books have been translated into 40 languages. The best-known screen adaptations include Solaris (2002, dir. Steven Soderbergh), The Congress (2013, dir. Ari Folman), Hospital of the Transfiguration (1978, dir. Edward Żebrowski), and especially the 1972 version of Solaris, directed by Andrei Tarkovsky.

Stanisław Lem died in Kraków on 27 March 2006. According to his will, he was buried in the Salwator Cemetery.