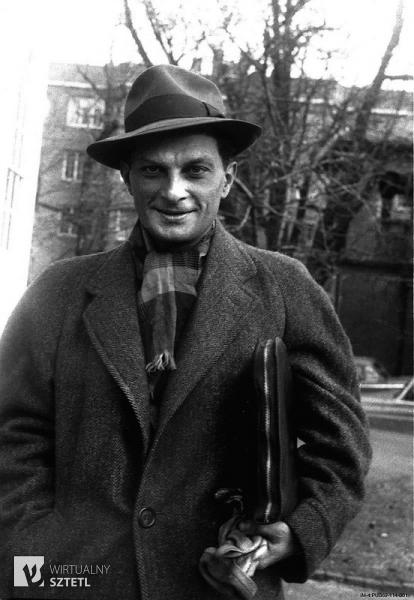 Ulam was to become a solicitor like his father, a well-known lawyer in Lviv, or an architect like his grandfather (a builder of, among others, the Lviv University of Technology). But he preferred to read the science fiction novels of Jules Verne and to study mathematics.

He was born in Lviv in an assimilated Jewish family, on 13 April 1909. After the outbreak of World War I, the Ulams left for a safer Vienna. They returned to the independent Republic of Poland at the end of 1918. In 1919, Staś Ulam passed the entry exam to the Tadeusz Kościuszko VII High School in Lwów. “I was a straight-A school student, except for calligraphy and drawing, but I didn't spend much time learning” he recalled. He was eleven years old when he decided to become an astronomer or a physicist. He knew by heart the names of the constellations and individual stars, their brightness and distance from the earth. He signed his school notebook as follows: “S. Ulam, astronomer, physicist and mathematician ".

“Verne and Wells wrote in times when it was possible to suggest various things to science with fantasy. Now science: physics, biology, astronomy, chemistry, overtake fiction” – he said to Olgierd Budrewicz many years later.

In 1927, he began studies at the General Faculty of the Lwów University of Technology, and then also at the Faculty of Mechanical Engineering, which guaranteed work after graduation. He began attending lectures for the sophomore students ran by Kazimierz Kuratowski. The Professor noticed a gifted student. Years later, he proudly recalled: “I could say about him like Steinhaus about Banach: Ulam is my great mathematical discovery”.

He quickly published his first and then another work in the "Fundamenta Matematicae", he gave up engineering studies and opted for pure science. “The dice has been cast” he would write several dozen years later. He was only the sophomore student when he became the secretary of the Lwów branch of the Polish Mathematical Society. While still a student, together with Stanisław Mazur he joined Banach's table in Scottish Café. “Banach, Mazur and Ulam, was the most important table in the Scottish Café” – Kazimierz Szałajko recalled.

In 1933 he received his Ph.D. in mathematics on the basis of the work On Measure Theory in General Set Theory. It was the first doctorate at the General Faculty of the Lwów University of Technology.

Despite his achievements, his chances for a university career in Poland were slim. In 1934, he went first to Vienna (the trip was financed by his father), and then to Zurich and Paris. When he returned, he had to decide what to do next, there was no place for him at Lwów universities. He then received a letter from John von Neumann, professor at the Institute for Advanced Studies in Princeton, one of America's most prestigious research institutes, who was inviting him to the USA. In Princeton, he was introduced to Albert Einstein himself. In mid-1936, he was offered a three-year scholarship at Harvard University, offered to emerging science stars. One and a half thousand dollars a year, a two-room flat, meals at the university and reimbursement of scientific travel expenses. "It seemed like a royal proposal in those days," he wrote. However, until the outbreak of the war, every year after the end of the classes, he returned to Lwów for summer vacations.

In August 1939, he left for the United States as usual, not knowing what awaited him there. The Harvard three-year contract was coming to an end and the prospect of permanent employment was uncertain. Together with Ulam, his brother Adam, a future historian and Sovietologist, sailed on the "Stefan Batory" ocean liner  They were already on the ship when they heard about the Ribbentrop-Molotov Pact of 23 August. War broke out shortly after their ship arrived in New York.

In late 1940, Ulam accepted a job as an assistant professor at the University of Wisconsin in Madison. However, he felt on the margins of history happening at the time. In spring 1943 he wrote to von Neumann asking about the possibility of working for the army. He was offered to join an undefined project. The new job was in New Mexico, Los Alamos, near the city of Santa Fe.

The secret facility in Los Alamos had been established several months earlier. It was to serve one purpose: the scientists assembled there were to construct an atomic bomb faster than the Germans. Among them were many Nobel Prize winners, current and future, including Niels Bohr (Nobel Prize in 1922), Erwin Schrödinger (1933), Enrico Fermi (1938), Otto Stern (1943), Max Born (1954), Richard Feynman (1965), Joseph Rotblat (1995). And others, equally famous, who, like Ulam, did not live to see being awarded with a Nobel prize. The project was codenamed "Manhattan". In the history of science there has not been any comparable number of geniuses gathered in one place, wrote Ulam.

“Information about Los Alamos exploded around the world almost simultaneously with the atomic bomb”, he recalled. On 16 July 1945, a test explosion was carried out at a range in New Mexico, and on 6 August, a bomb called “Little Boy" was dropped on Hiroshima, killing approximately 80,000 people. The second ("Fat Boy") was dropped on Nagasaki on 9 August. In his memoirs dictated towards the end of his life, Ulam said that he did not immediately realize the impact of nuclear weapons on the fate of the world. In Los Alamos, it was only said that they were making a "multiple bomb", more powerful than the ones used so far.

After the war, he decided to stay in the United States. He was convinced that none of the family survived the Holocaust, and it was only years later that he found cousins in France and Israel. He started working at the University of Southern California in Los Angeles. At the beginning of 1946 he fell ill. The causes of acute encephalitis have not been established. The question arose as to whether the disease was not related to work at Los Alamos, and the other one - what would happen if he survived but did not regain his mental faculties. A scientist who knew the secret of the atomic bomb would be a tasty morsel for any intelligence in the world. He recovered and sometime later received an offer to return to Los Alamos. The centre was to become a place for research on the use of nuclear energy. Ulam spent there nearly a quarter of a century. Together with Edward Teller, they started work on the hydrogen bomb.

In 1947, he met Steinhaus who came to the USA. He didn't tell him what he was involved in. Ten years later, Steinhaus read in a book by Robert Jungek Brighter than a Thousand Suns about constructing a hydrogen bomb. Jungk wrote that it was only Ulam, "le génial mathématicien polonais", that steered the research in the right direction. Because when the Soviet Union produced its own atomic bomb, it became clear that the world found itself on the brink of another war. “I immediately said that the work on the superbomb had to be pushed forward”, Ulam recalled. Soon after, US President Harry Truman signed a decision to accelerate work on the hydrogen bomb.

On 1 November 1952, a test explosion of a 63-ton bomb called "Mike" took place on the Eniwetok Atoll in the Marshall Islands archipelago. Mike had the power of 700 bombs dropped on Hiroshima, the island of Elugelab ceased to exist after the blast. Ulam, however, believed that the existence of a weapon that could destroy the world would contribute to reducing the risk of an all-out war.

In the 1950s, he became involved in research on the use of nuclear energy to propel spacecraft, but President Dwight Eisenhower was not enthusiastic about the idea. It was only after John Kennedy (1960) became president of the United States that Ulam received a call from his science advisor who asked what project was worth presenting to the president. "Maybe a trip to the moon" – Ulam suggested. In his inaugural address, Kennedy declared that by the end of the decade, the United States would land astronauts on the Moon. Ulam became a consultant to the President’s Science Advisory Committee, and later also to the United States Air Force Command.

With breaks for visiting professorships at Harvard and the Massachusetts Institute of Technology, he worked in Los Alamos until 1967. In 1960 his famous book Unsolved Problems of Mathematics was published, and in 1967 he was appointed Chairman of the Department of Mathematics at the University of Colorado. He studied the relationship of mathematics with physics and biology. With Mark Kac he wrote a mathematical supplement to Encyclopedia Britannica - Mathematics and Logic. In 1972, he began to dictate memories - Adventures of a Mathematician. Summing up his life, he cracked a joke: “Sometimes it seems to me that the most rational explanation for everything that happened in my life is this: I'm still thirteen years old and fell asleep reading a book by Jules Verne or H.G. Welles ".

He died in Santa Fe on 13 May  1984. He was full of contrasts, remembered his wife, a proud Pole on the one hand, and an assimilated agnostic Jew, very sensitive to his ethnic affiliation, on the other. But most of all, he was a mathematician, he lived in a world inaccessible to other people, including his wife. In her memoir, Françoise Ulam recalled her husband's words: - The best way to die is a sudden heart attack or a shot fired by a jealous spouse.

“He was lucky to die the former way, although I think he would probably prefer the latter”, she wrote. He was buried in the Montmartre cemetery in Paris.

Mathematical concepts associated with the name of Ulam: