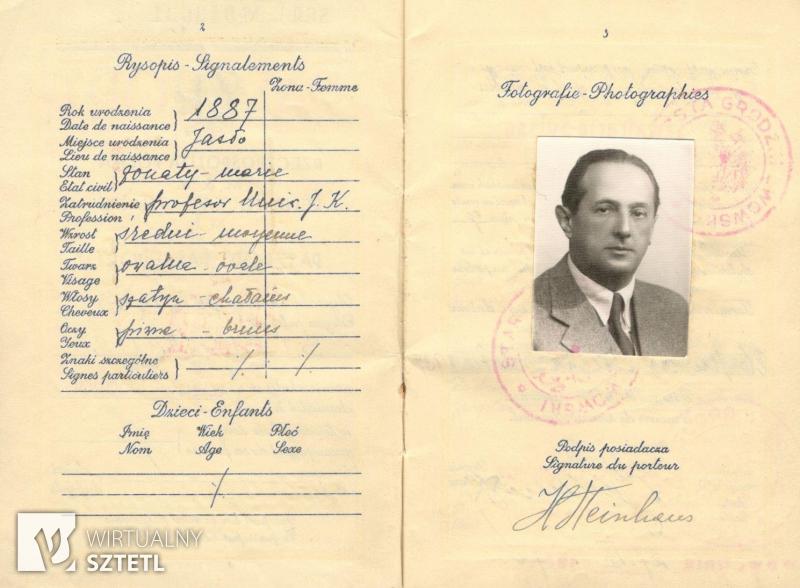 Hugo Dionizy Steinhaus (14 January 1887, Jasło – 25 February 1972, Wrocław) was one of the two founding fathers of the Lwów School of Mathematics. Until the end of his life, he repeated that his greatest mathematical discovery was the discovery of Banach. But this is more of a flirtatious statement than truth. He has had enough successes and achievements thanks to which he has his own place in the history of mathematics.

He came from a wealthy Jewish family of merchants and bankers in Jasło. His father's brother was a deputy of the Austrian parliament. Already in communist Poland, in personal questionees, under the heading “origin” he wrote ironically “aristocracy plus bourgeoisie."

He was born on 14 January 1887 in Jasło, where he graduated from secondary school (later the King Stanisław Leszczyński State High School). The mathematical studies which he began in Lwów in 1905, he continued from 1906 at the University of Göttingen, where the theory of mathematics was taught by the most prominent European lecturers. The promoter of Steinhaus' Ph.D. dissertation, entitled Neue Anvendungen des Dirichlet'schen Prinzips submitted in 1911, was one of the greatest mathematicians at the time, David Hilbert.

After obtaining the doctoral degree he returned to Jasło for a few years. Following the outbreak of the war in 1914, he was incorporated into the Polish Legions of the Austro-Hungarian army, but the family managed to have him discharged from the army. He started working at the National Reconstruction Headquarters in Krakow. In 1917, he obtained post-doctoral degree in Lwów on the basis of the dissertation entitled On some properties of Fourier series. After the war, when some Lwów mathematicians left to organize the mathematics department at the Polish University in Warsaw, Steinhaus became a lecturer at the University of Lwów. In 1920, he became an associate professor of mathematics and head of the 1st Department of Mathematics at the (already) Jan Kazimierz University.

In 1923, he was already a full professor. It meant stabilization. This was a real success since getting a university post was not easy. “He was one of the few Polish professors of Jewish origin” - wrote Stanisław Ulam, who met him in the late 1920s. That was a simplification. There were many more professors of Jewish origin at universities. But he was one of the few who did not change religion for a career.

Marek Kac mentioned that there were very few reasons that could prevent Steinhaus from giving lecture. He once conducted classes for only two students (one was Kac), justifying it with a Latin maxim Tres faciunt collegium (three people make up the assembly). When the listeners protested that there were only two of them, he replied that the third person was himself. The next time, only Kac came to the lecture, but the scholar began his classes, nevertheless. When asked how this is related to the rule that at least three people are needed, he undeterred, answered:

- After all, God is always present.

"By the way, he was a declared atheist," Marek Kac wrote about him. Marceli Stark remembered why Steinhaus' lectures were not popular: "Despite careful preparation, the lecture was too difficult for the average student." He himself liked the most those classes, during which Steinhaus, after filling successive blackboards with proofs, was getting lost in his argument. “Then, we learned how to do math" - recalled Kac. Steinhaus stepped out of the role of a haughty professor and involved students in a discussion during which he recreated a scientific argument from the very beginning: ”…contented when we suggested a good idea.”

Hugo Steinhaus tried to find practical application for his mathematical theories. Not always effectively. For example, he failed to convince Polish Post to use a device that would confirm the content of a registered letter. By writing the letter on a special typewriter, the sender would receive proof that the content of the envelope is identical to the copy they have. They did not come to an agreement. As a result to this day, by issuing the confirmation of posting a registered letter, the Post Office only confirms that the envelope has been sent. It may contain all or… nothing.

Steinhaus also tried to solve the riddle of how to determine the location of an object inside the human body. A two-dimensional X-ray image revealed only the presence of an object, but the mathematician wanted to construct a device that would allow to see the patient's body during surgery as if it were three-dimensional and transparent. The prototype of the introvisor, precursor of the tomograph, was created in a military hospital in Lwów. The first successful operation was the extraction of a needle shard from the hand of corporal Reguła. In 1938 Steinhaus obtained a patent for an introvisor in Poland, and later also in the USA.

Another device patented by the scientist was a longimeter, that is an instrument used to measure the length of curves on maps. He was also the author of works in the field of games theory, functional analysis, set theory, and even medicine. In this field, using the calculus of probability, he developed a method of determining paternity. He also turned out to be a great populariser of mathematics. In 1938, with the help of Marek Kac he published the Mathematical Kaleidoscope. The book was translated into ten languages and reprinted several times, also after the war.

He took part in gatherings in the famous Scottish Café in Lwów - in the so-called Scottish Book there were nine problems of his authorship, but he participated less frequently in sessions with Banach that lasted many hours. He was a teetotaller, he neither drank alcoholic beverages nor smoked, and took care not to compromise the professorial chic. The Scottish Café was not his most favourite place, he preferred Ludwik Zalewski's elegant confectionery at Academicki Square, where the best cakes in Lwów were served.

After the annexation of Lwów by the Soviet Union (which then became Lviv), Steinhaus remained the head of one of the six mathematical departments at the Ivan Franko University. He was also, like the others, enrolled in the Ukrainian Academy of Sciences and received an additional salary. He was even forgiven for of the provocative questions directed at the party commissioners of the university: "How do you differentiate in a Marxist way?"

When the Germans captured Lviv in 1941, he left. He spent the rest of the war near Gorlice and Jasło. He hid for almost four years as Grzegorz Krochmalny, a peasant from Przemyśl. He was a trustful follower of the Polish government that was set up by the Red Army in Lublin, in July 1944. “They resemble a wolf disguised as a grandmother in the Little Red Riding Hood fairy tale” he wrote in the journal "Half-intelligentsia, a few doctrinaires, a few opportunists ready to do whatever Stalin tells them to do.”

In the autumn of 1945, he went to Wrocław, where he co-organized the Mathematics Department at the combined University and Polytechnic. It was a difficult decision. At the end of June, he wrote: "Outside Wroclaw, they warn about mines, lots of corpses, the nearby villages destroyed, you live with canned goods". When he arrived at the end of September, he added: “The biggest pile of duffers on the biggest pile of bricks and rubble in Europe."

Soon people started talking about the Wrocław School of Mathematics, which was a continuation of the Lwów school. In 1946, Steinhaus even inaugurated the writing of the New Scottish Book, but it only survived for a few years (then changed its name to the Book of Wrocław) and did not match the Lwów fame. He became famous for his works on game theory and the ruthless enforcement of the rules of the Polish language by mathematicians. Everyone knew that a work written for Steinhaus had to be not only original in mathematical terms, but also written in perfect Polish. “He had a great linguistic sense, sometimes he was even pedantic”, remembered Ulam from the pre-war times.

– This gentleman might get the Nobel Prize someday, but as long as I have something to say here, he will not be a doctor, because the doctor should know the native language - he once said about a young adept of mathematics. He did not like communist ways of promoting education. "Just because you can now read, write and publish doesn't mean you are no longer illiterate", he remarked once upon a time.

Already in Wrocław, Steinhaus's Słownik Racjonalny (Rational Dictionary), a collection of aphorisms and puns, compared with Stanisław Jerzy Lec's Unkempt Thoughts, began to be created. He commented on the new reality: “One that can do without anything - a citizen." Hearing Steinhaus's most famous aphorism: “A iron ball chained to my foot – Earth”, Julian Tuwim knelt in front of the mathematician.

He died in Wrocław on 25 February 1972. The journal he kept almost all his life was published under the title Wspomnienia i zapiski (Memoirs and Notes) in London in the early 1990s. In Poland, it was published even later, in 2002.

The thought of Steinhaus, which accompanied him throughout his life, was inscribed on the tombstone - it was, inter alia, used as a tittle of a selection of his works – Mathematics mediates between spirit and matter.

At the Wrocław University of Science and Technology there is the Hugo Steinhaus Centre, searching for practical applications of methods at the borderline of mathematics, economics, natural sciences and engineering for solving world problems.

Mathematical concepts related to the name of Steinhaus: