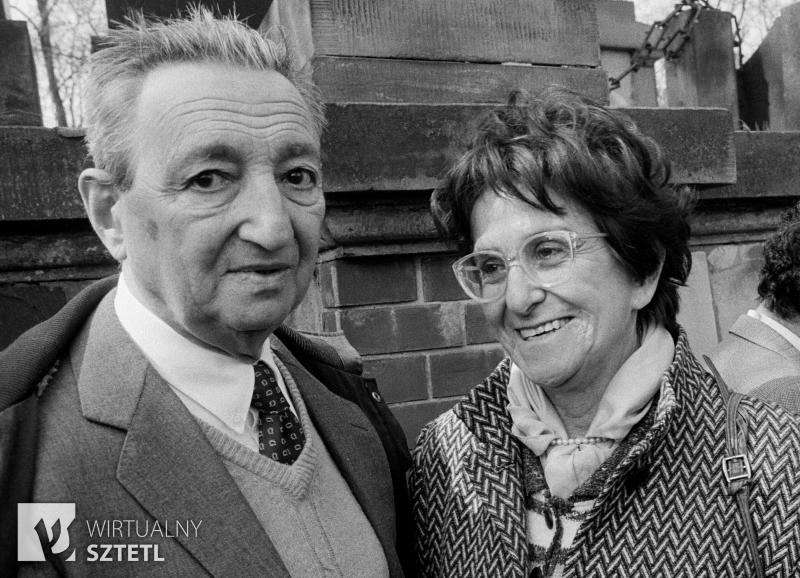 “But are we, from that time, like everyone else?”

The parents came from families with an atheistic worldview and socialist attitudes. Alina's father, an internist, was the director of the hospital in Radogoszcz, a social worker, and an activist of the Jewish socialist party Bund (despite his unfamiliarity with the Yiddish language). He also held the position of a city councillor, in the last years before the war “he was an alderman on the issues of health in the city of Łódź with its socialist municipal council”[1.2]. Alina described him as follows:

„He was a representative of the pre-war intelligentsia, broadly educated and with interests reaching beyond the matters of his own profession”[1.3].

Arrested by the Germans as part of the extermination action of the Łódź intelligentsia (Intelligenzaktion Litzmannstadt) on 11 November 1939, was imprisoned in a labour camp in Radogoszcz and shot in December 1939.

Alina's mother was a paediatrician and specialist in childhood tuberculosis. She worked at the Anna Maria Hospital (now Doctor J. Korczak Hospital). Her father, a wealthy merchant Karol Markson, who “on the portrait looked more like a Polish nobleman than a Jewish merchant, with a bushy moustache curled upwards”[1.1.3], did business in Poland and Russia, made sure that his children received good education – two daughters became physicians (Alina's mother was educated in St. Petersburg and Bonn), one a violinist, another studied chemistry. The only son graduated as an engineer in France.

Before the war, Alina Margolis attended an experimental, co-educational Municipal School of Work (Polish: Miejska Szkoła Pracy) on 115 Piotrkowska Street (later transferred to 23 Łęczycka Street), established by the City Council of Łódź (there were only two such schools in Poland at that time).

In 1940, shortly before the establishment of the ghetto in Łódź, Alina and her brother were sent by their mother to their aunt in Warsaw, where they lived until their deportation to the ghetto. In the ghetto, Anna Margolis, who worked at the Berson and Bauman families Children's Hospital soon placed Alina in the Jewish Nursing School (Polish:  Żydowska Szkoła Pielęgniarstwa) on Mariańska Street, managed by Luba Blum-Bielicka. Olek, Anna’s eight-year-old brother, was sent to the so-called Aryan side, thanks to which he survived, hidden, among other places, in the Our Home (Polish: Nasz Dom) orphanage, founded by Maryna Falska and Janusz Korczak, and then in Zakopane.

Here’s how Alina recalled the period spent in the Nursing School:

“I moved to a boarding school. It was great. Because this place was extraterritorial (…). It was an amazing place. We lived there as if we were in some kind of refuge. Thanks to this school, my memory of the ghetto is completely different from that of the others. Thanks to Luba Bielicka, the director – there is no doubt. She saved both our lives and our souls”[1.4].

Alina observed the outbreak and the beginnings of the Warsaw Ghetto Uprising as she stood in the crowd on Bonifraterska Street, on the "Aryan" side:

“It was then, there, next to this wall, that for the first time in my life I really felt Jewish. And that forever, until death, I will be with those who were charred alive, with those strangled, gassed in shelters, with those who fought and were killed because they could not but perish, with those whose fate I did not share”.[1.5].

In August 1944, during the Warsaw Uprising, she served as a nurse, initially in the Old Town (in Adina Blada-Szwajgier's apartment on Miodowa Street, there was a hospital), and then in Mokotów. For participation in the uprising, she was awarded the Cross of Valour (Polish: Krzyż Walecznych). After the capitulation, she spent some time in a transit camp in Pruszków. From there, in a Red Cross convoy of several people, she got to Promyka Street in Żoliborz district of Warsaw to take a group of Jewish insurgents, ŻOB (Jewish Combat Organisation) fighters, among whom was Marek Edelman – her future husband. All the rescued (12 people, including Antek Cukierman, Cywia Lubetkin, Tuwia Borzykowski, Julian Fiszgrund) lived together in Grodzisk Mazowiecki at 50 3rd May Street from the end of 1944 till the spring of 1945.

After the war, Alina Margolis and Marek Edelman came back to Łódź, where they both began medical studies. When asked about this choice, she said:

“I didn’t intend to be a doctor at all. I wanted to be a school or kindergarten teacher, but because graduating from a nursing school was considered as completing the first year of medicine, so without any exams, without any high school certificate exam, I was immediately able to start the second year”[1.6]].

After graduation, she started working as a paediatrician at the 2nd Paediatric Clinic in Łódź. She took care of children suffering from diabetes. She was a pioneer in the development of Polish paediatric diabetes. In 1953, she founded a clinic for children with kidney diseases and a centre for the treatment of children’s diabetes in Rabka.

As a result of the anti-Semitic campaign in March 1968, Alina, who was at the peak of her professional career, and her husband lost their jobs. Her postdoctoral study was blocked, although just a short while before these events, during the endocrinology congress in Paris, she received the highest award for outstanding achievements[1.7]].

In 1972, together with her children (Anna and Aleksander) they went to Paris.

In the first years of emigration, to make ends meet, she had several jobs (including as a vaccine tester). She got her medical diploma (Polish qualifications were not recognized) when she was almost sixty years old.

In the mid-1970s, she started her social activity, for which she became very well known. She took part in the rescue operation of the Vietnamese who escaped from communist Vietnam on boats (the so-called boat people). organized by Médecins Sans Frontières (Doctors Without Borders) in the South China Sea. Immediately afterwards, with the Médecins du Monde (Doctors of the World) organization, which she founded with Bernard Kouchner, she went to Salvador torn by civil war. Until 2002, with MDM, she worked as a doctor in countries engulfed in civil wars: Nicaragua, Chad, Guatemala, Bosnia and Herzegovina, Afghanistan and Moldova. In Russia, she organized homes for street children.

She became involved in Polish affairs at the beginning of the 1980s, after the introduction of martial law. She organized aid for the democratic opposition. She co-founded a French-Polish association “SOS Aide aux Malades Polonais” (Help for the Sick in Poland), offering treatment for terminally ill patients from Poland in France, organizing internships for Polish doctors, as well as financial assistance for hospitals in Poland.

In 1989, she founded the Help for Social Initiatives Bureau (Polish: Biuro Pomocy Inicjatywom Społecznym), and in 1991, the Nobody's Children (Polish: Dzieci Niczyje) Foundation (now Empowering Children Foundation), which since 2011, together with the Literary Notebooks Foundation (Polish: Fundacja Zeszytów Literackich), has been awarding the Alina Margolis-Edelman Award for People Helping Children. On April 6, 1998, at the children request, she became the Dame of the Order of the Smile (Polish: Kawaler Orderu Uśmiechu)

Alina Margolis died in Paris in 2008. She was buried in the ecumenical cemetery in Bagneux. Her symbolic grave is located in the Okopowa Street Jewish cemetery in Warsaw.

By the decision of the City Council in Łódź, Alina Margolis-Edelman has been nominated the Matron of the Year 2022.