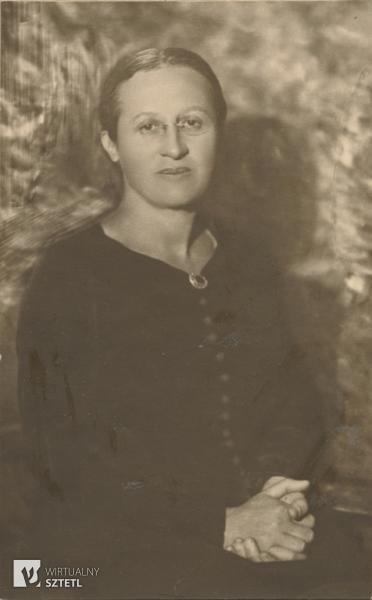 She was born Gitla Eiger, the eldest of ten children of Moses(Maurycy) and Blima Fayga (Balbina) née Halpern. She descended from the rabbinical family of a famous Talmudist, Rabbi Akiva Eiger – she was his great-granddaughter.

She spent her early childhood in Zawichost and received a traditional Jewish upbringing. There, she became familiar with the rituals of the shtetl, learnt lyrics of the songs and words of the prayers. This came to benefit her work as an ethnographer, as she could draw knowledge from living tradition. In the years 1884–1888, she attended the girls' progymnasium in Sandomierz, where she became Regina for the non-Jewish world. In 1893, her family moved to Zwierzyniec, where Gitla’s father leased a brewery from the Zamoyski family.

On 26 September 1896, she married Nuchim (Natan) Liliental in the Szczebrzeszyn synagogue. They settled permanently in Warsaw soon after the nuptials. There Regina attended secret lectures of the “Flying University” (Polish: Uniwersytet Latający) for women. Ludwik Krzywicki’s ethnology class inspired her to research Jewish rituals. Prompted by the scholar, she began to cooperate with the Wisła and Lud periodicals. In the years 1898–1905, she published her first ethnographic works in their pages: Jewish Superstitions (Polish: “Przesądy żydowskie”), Jewish Betrothal and Wedding (Polish: “Zaręczyny i wesele żydowskie”), Afterlife and the World to Come in Jewish Beliefs (Polish: “Życie pozagrobowe i świat przyszły w wyobrażeniu ludu żydowskiego”), Jewish Legends on the Exodus of the Jews from Egypt (Polish: “Legendy żydowskie o wyjściu Żydów z Egiptu”), Beliefs, Superstitions and Practices of the Jewish People (Polish: “Wierzenia, przesądy i praktyki ludu żydowskiego”). Other well-known publications in her body of work include The Jewish Child (Polish: “Dziecko żydowskie”; 1904, published in German translation in 1908), The Worship of Heavenly Bodies Among the Jews and the Remnants of this Cult among Modern Jews (Polish: “Kult ciał niebieskich u starożytnych Hebrajczyków i szczątki tego kultu u współczesnego ludu żydowskiego”; 1921), The Life of Moses on the Basis of Jewish Legends (Polish: “Żywot Mojżesza na podstawie legend żydowskich”; 1924), The Jewish Child (1927, published posthumously; the second work under the same title).

However, she gained greatest recognition for the three volumes of Jewish Holidays in the the Past and Present (Polish: Święta żydowskie w przeszłości i teraźniejszości), published by the Academy of Learning in Kraków (1909–1918). The reviewer of the first two volumes was historian Meir Balaban, and Regina was awarded a scientific scholarship for her work.

Having had no formal academic education, she constantly pursued studies on her own. She mastered many languages, including Hebrew and Aramaic, which enabled her to study the Gemara. She looked at Jewish culture from the perspective of a religiously emancipated intellectual. By examining the roles assigned to the genders by tradition and religion, she opposed the marginalisation of women. She broke moral taboos and wrote about female physiology and sexuality. In 1908, she angered Orthodox Jews by publishing a text titled Down with Barbarism! On Circumcision (Polish: “Precz z barbarzyństwem! Rzecz o obrzezaniu.”)

She campaigned for Yiddish to be introduced into the school curriculum even before it was recognised as the national language of the Jews in 1908. She succeeded in this field while working at a cheder in Piaseczno, where she taught Yiddish calligraphy and arithmetic in 1903–1904, collecting materials for her publication on Jewish children. Jakub Szacki wrote that in 1906 she had made a call for the establishment of Jewish schools, spoke publicly against assimilation, and proclaimed herself a Yiddishist[1.2].

She manifested her attitude toward the Yiddish language and the right of Jews to preserve their distinct culture in the Polish press. She opposed attempts to deprive Jews of their cultural identity and fought for a better perception of the Jewish language and culture among Poles, believing that anti-Semitism could be eradicated with better knowledge of the Other. In 1905, she wrote the following in the Ogniwo magazine: “Do you indeed believe that a Jew speaking their language, not divesting themselves of what is inside them, cannot love what is holy, and long for the great and the sublime? Do you think that a Jew can become a man only at the cost of throwing away their ‘Self’ and that in Poland, only Polish culture will manage to raise a Jew to the heights of ethics and humanity? If you believe so, lulled by the maudlin song of the assimilationists, then it is time to part with the notions harmful to the Jewish people as a whole. Get to know this community better, look into the fruits of its spirit, and you will see that Jewish distinctiveness has nothing to do with hostility.” She saw assimilationists as a denationalised group, representing a class of the privileged few who “[…] having denied their people, do not know them and do not understand them, who being strangers to common Jewish people, insult their souls like filthy rags.”

She was the first translator of I.L. Peretz’s short stories. They were published in 1901 in the Jewish Polish-language Izraelita magazine, in which the writer himself had originally published the Polish translations of his works in order to reach assimilated Jews. Peretz's short stories translated by Regina also appeared in Życie Żydowskie and in Polish periodicals (Kurier Codzienny, Niwa polska). Through her works inspired by Jewish folklore, she sought to convince Polish readers that there was a lot of ambitious literature of high artistic value written in Yiddish and thus make them sensitive to the spirituality of her people. She was the author of Polish translations of Jewish Folk Songs from the collections of Saul Ginzburg and Petr Mark as well as fragments of tchines (women’s prayers).

As a teacher (until 1923, she taught history of the Jews in Warsaw’s Jewish secondary schools for girls with Polish as the language of instruction), she wrote for the Warsaw press (Kurier Codzienny, Przegląd Tygodniowy, Nowe Tory, Głos Żydowski), raising the issues of the upbringing of the youth, sexual awareness, postulating the need for educational reforms and an individual approach to the development of the child’s psyche.

In 1924, she enthusiastically accepted an offer from Max Weinreich and Noach Prylucki to collaborate with the Yidishe Filologie bimonthly. However, she did not feel competent in writing scientific texts in Yiddish. An issue of the periodical featuring her text – titled Ayn-hara (English: Evil Eye) and translated into Yiddish by Nechama Epstein – was published after her death.

She died on 4 December 1924 after a failed surgery. Death interrupted her work on the fourth volume of Jewish Holidays (Polish: Święta żydowskie) and the text Beliefs and Practices of the Jewish People Related to Menstruation (Polish: “Wierzenia i praktyki ludu żydowskiego związane z menstruacją”).