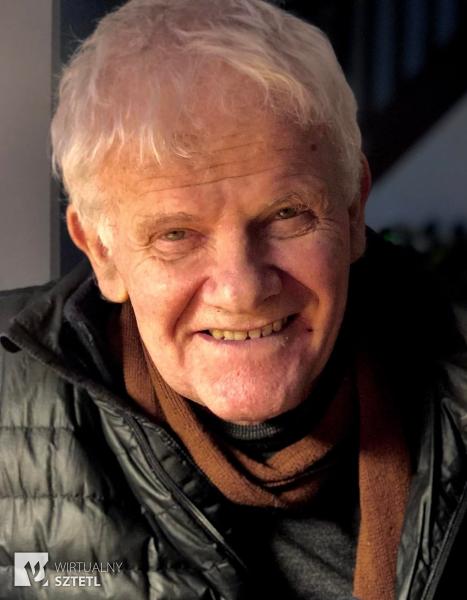 Gren Roman (30 April 1951, Warsaw – 9 August 2022, Paris) – writer, translator from French and English, scriptwriter, pedagogue. From emigration during the martial law in 1981 until the end of his life, he lived in France.

He was born to a Jewish family as a son of Julian Gren and Felicja née Baum; He descended from the Gringras family settled in Kielce, his grandfather was a renowned Kielce photographer Kopel Gringras. He graduated in biology at the University of Warsaw, but for many years he worked as a pedagogue and tutor in youth centres.

In 1981, he emigrated to France. He worked as a translator in emigree publishing houses and during the production of Three Colours film trilogy by Krzysztof Kieślowski (1993–1994). In 1996, he published a collection of short stories A Landscape with a Child, for which he received the Culture Foundation Award and a nomination for Nike Award in 1997. In 2000, "Midrasz" monthly published a short story entitled Milczenie (Silence). He was the co-author of the script for Agnieszka Holland's film Julie Walking Home (2002). In 2004, “Zeszyty Literackie” quarterly magazine published excerpts from Wyznanie (Confession), published under the same title as a book in 2012. The novel Schronisko (Shelter) was published in 2011. Among the translations, it is worth mentioning such titles as Niewłaściwa twarz: wspomnienia ocalałej z warszawskiego getta (Improper face; Memories of a Warsaw Ghetto Survivor) by Małgorzata-Maria Acher (2001), Szaleniec (The Madman) by Gibran Khalil Gibran (2002), as well as a number of works in the field of biology: Rozród ssaków (Mammalian Reproduction) (1978), Komórki płciowe i zapłodnienie (Reproductive Cells and Fertilization) (1978), Ewolucja człowieka (Human Evolution)  (1999).

In his works, he took up Polish-Jewish topics, and was by some critics was included in the so-called Second Generation after the Holocaust. Landscape with a Child was among four important works – along with Błękitne śniegi (The Blue Snow) by Piotr Bednarski, Koń Pana Boga (God’s Horse) by Wilhelm Dichter and Mezalians by  Violi Wein – forming the so-called Judaic quartet, that is a series of works published almost simultaneously (1996) by writers who knew the Holocaust only as a historical fact, but who sought to bring back the memory of the pre-war world of Polish Jews, that was being erased in the times of the People's Republic of Poland, so as to fulfil the moral obligation to revive the memory of this part of Polish heritage. The narrator of the nostalgic A Landscape with a Child, partly based on autobiographical motives, is an 11-year-old boy, who was not told about his true biography and about the past of his own family, but as a result of a coincidence (including finding photographs of his ancestors), discovers his identity; this led to the departure from Poland with his parents in 1968. The Issue of the search for identity was continued in Wyznanie (Confession), kept in the convention of magical realism. There, the already discovered secret of origin is tamed, going through successive stages: self-knowledge, acceptance, reconstruction and attempts to continue the Jewish tradition (according to Sylwią Majdosz).

Roman Gren died in Paris after a long and severe illness, at the age of 71.