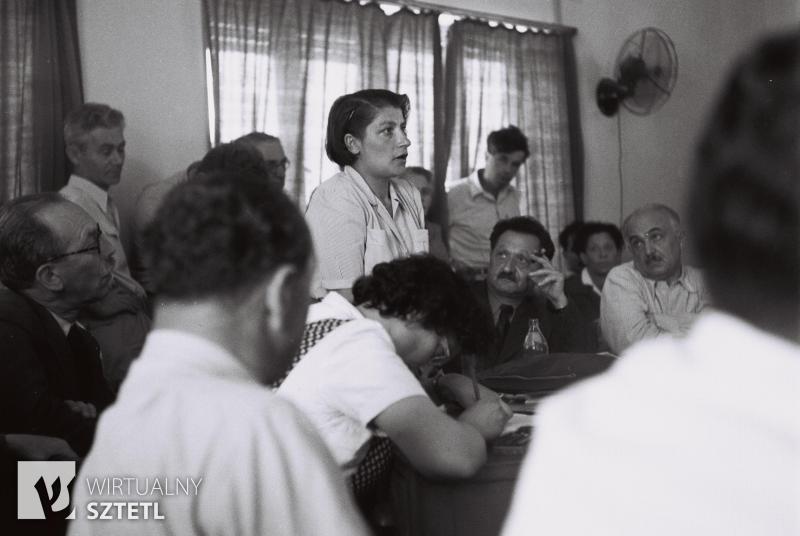 Cywia Lubetkin was born into a religious family in Byteń near Słonim. She attended a Polish elementary school. From the beginning of the 1930’s, she was active in the Zionist youth organisation Dror and was on the executive of He’Chalutzc Ha’Lochem. From 1938, she lived in Warsaw. In 1939, she was part of the Dror delegation to the 21st Zionist Congress in Geneva. Following the outbreak of war, she managed to reach Kowel which, after the aggression on 17th September 1939, she found herself under Soviet occupation. In 1940, at the request of the Zionist organisation, she returned to Warsaw. There, in 1942, she co-founded the Anti-Fascist Bloc and the Jewish Combat Organisation. She also belonged to the Jewish National Committee (Żydowski Komitet Narodowy) and to the Co-ordinating Commission. In 1943, she took part in the January self-defence operations and then in the ghetto uprising. She spent the final days of the uprising in a bunker at Miła 18. On 10th May 1943, she reached the Aryan side by going through the sewers. During the Warsaw Uprising, she fought in units of the Home Army, still remaining as a member of ŻOB. After the War, she was active in the Bricha Zionist organisation, where she co-ordinated the emigration wave of Jews from Poland. In 1946, together with her husband Itzchak Cukierman, she settled in Palestine. There, she become involved with the kibbutz movement (among others, she co-founded the Lochamei Ha’Getaot kibbutz, hebr. Bojowników Getta). In 1961, she testified as a witness, to the Holocaust, in the trial of Adolf Eichmann. She is the author of a Hebrew-language book, which was also published in Poland (Zagłada i powstanie, trans. M. Krych, Warsaw 1999).