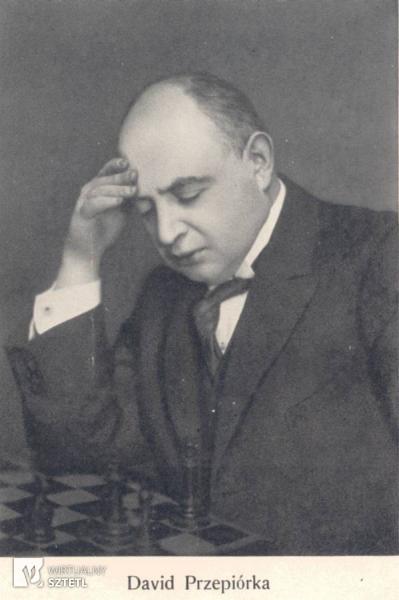 When he was just 9-year-old, Przepiórka was considered an exceptional chess player. In 1891, he took part in a simultaneous exhibition of Jan Taubenhaus and achieved a sensational victory. He studied at the Faculty of Mathematics of the University of Warsaw, then in Göttingen and Munich. Initially, he was interested in chess compositions. He published the problems in professional foreign magazines (mainly German) as well as in national dailies and weeklies: “Tygodnik Ilustrowany”, “Kurier Warszawski”, “Wędrowiec”, “Kłosy”, “Ziarno”, “Sport”, “Tygodnik Szachowy”, “Ilustracja Polska” and “Neue Lodzer Zeitung”.

In the years 1914–1918 Przepiórka lived in Geneva. After the war, he returned to Warsaw and joined the ranks of Warszawskie Towarzystwo Zwolenników Gry Szachowej (WTZGSz - Warsaw Society of Chess Game Adherents). His chess career flourished in the years of the Second Polish Republic. He won the New Year's tournament in Hastings (1924/1925), among the top players in Györ (1924 - 2nd place) and Merano (1926 - 2nd - 4th place).

In 1928 he won the title of world vice-champion of amateurs at the tournament in The Hague. He was the first Polish chess champion (1926) and a multiple winner of WTZGSz tournaments. In 1930, together with the team, he won the gold medal at the Chess Olympiad in Hamburg. A year later in Prague with the Polish national team he won a silver medal. In 1936, as the only one from Poland, he was awarded the title of honorary activist of the Fédération Internationale des Échecs.

He was also an honorary member of Polish and foreign chess organizations. Out of his inspiration and with his financial support the Sixth Chess Olympiad took place in Warsaw in 1935. From 1921, he edited the chess section in "Tygodnik Ilustrowany”, later in the pages of "Kurier Polski", "Naokoło świata" and "Świat". In the years 1926–1933 he published the “Świat szachowy” monthly. From 1933, he managed the works of Warszawskie Koło Problemistów (the Warsaw Circle of Problemists). One of his passions was collecting chess literature, he had the richest collection in the country, numbering over a thousand volumes.

In January 1940, he was arrested along with other chess players by the Gestapo. Some people were released after a few days, while those of Jewish origin (apart from Przepiórka, also Stanisław Kohn, Achilles Frydman, Mojżesz Łowcki, Moryc Abkin and Jakub Rabinowicz) were transported to the Pawiak prison. Probably between January and April 1940 they were shot in Palmiry.

The text is based on the book “Żydzi w Polsce. Dzieje i kultura. Leksykon” (Jews in Poland. History and culture. Lexicon), edited by J. Tomaszewski, A. Żbikowski, Warsaw 2001.