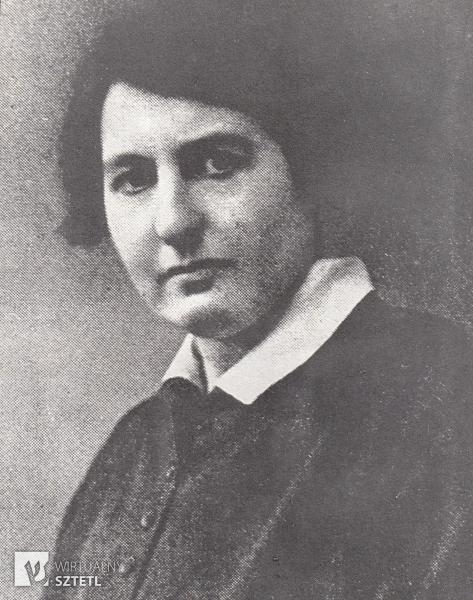 Stefania was born into a wealthy Jewish family as the daughter of merchant Julian (Izaak) Wilczyński (d. 1911) and Salomea née Walfisz (d. 1929). It is certain that she had a six years older sister, Julia, and brother Stanisław, who was nine years younger. The obituary after her father’s death includes information about the mourning ‘sons-in-law,’ the only proof that Izaak Wilczyński had other daughters. Stefania completed a six-year school for girls ran by Jadwiga Sikorska, where she learned, among other things, French, German, natural sciences, and physics. She then went on to study natural sciences in Geneva and Liège. However, she did not complete her studies, she only obtained a ‘semi-diploma.’

After returning to Warsaw in 1909, 23-year-old Stefania started working in a shelter for Jewish children at Franciszkańska Street, which was run by the “Help for Orphans” society. She was hired by Stella Eliasberg, an activist of the society. It was there, during a poetry evening for children, that Wilczyńska met Janusz Korczak for the first time. At that time, the society was collecting funds for the construction of a new house. In the autumn of 1912, thanks to the raised money, it was possible to build a new house for Jewish children at 92 Krochmalna Street. Korczak and Wilczyńska were at its helm: him as director, her as chief manager. From that time on, for over 30 years, the Orphans’ Home was their joint effort. They both used modern pedagogical methods and had a similar sensitivity. Her original contribution to the operation of the Home was the roster system.

At the end of January 1931, Stefania Wilczyńska went to Palestine for the first time. She stayed at the place of her friend Fejga Lifszyc, where she spent several weeks. She left in March 1934. She was planning to stay for good, as she no longer felt needed in the Orphans’ Home. The next trip took place in autumn 1935. She came back to Warsaw in April 1936. Korczak also made two trips to Palestine – first in 1934 and then in 1936. In his absence, Wilczyńska would take over the management of the Orphans’ Home.

In 1937, she started working in Centos – the headquarters of the Jewish Societies for the Care of Orphans and Deserted Children. She moved out of the house at Krochmalna Street. She was a clerk at the pedagogical counselling centre catering to almost 200 boarding schools all over Poland. At the end of 1937, she was granted an aaliyah licence. In March 1938, she made her fourth trip to Palestine. She first moved there for half a year, and then she was to stay for good. She worked with the youngest group of children at the school in the Ein Harod kibbutz. However, her educational methods were largely misunderstood. On 2 May 1939, when the threat of war was looming over Poland and anxiety was rising, Stefania Wilczyńska left Palestine.

The first German bombs fell on Warsaw at the very beginning of September 1939. A shelter was organised in the basement of the Orphans’ Home; Wilczyńska ran a first aid station. After the establishment of the Jewish district on 2 October 1940, the Orphans’ Home was moved to 33 Chłodna Street. In the autumn of 1941, the Home was moved once again, this time to the building at a double address – 16 Sienna/9 Śliska. Throughout this time, Wilczyńska worked as an educator, provided assistance in the Shelter House at Dzielna Street, and took part in courses and lectures organised by the Dror.

On 5 or 6 August 1942, she was taken to Umschlagplatz together with the children and other educators. From there, the Germans sent them to the Treblinka II death camp.

Stefania’s symbolic headstone was placed on her parents’ grave in the Jewish cemetery on Okopowa Street, Warsaw. On 8 March 2012, the Prof. Moses Schorr Foundation announced that Women’s Day 2012 would be celebrated as Stefania Wilczyńska’s Day.