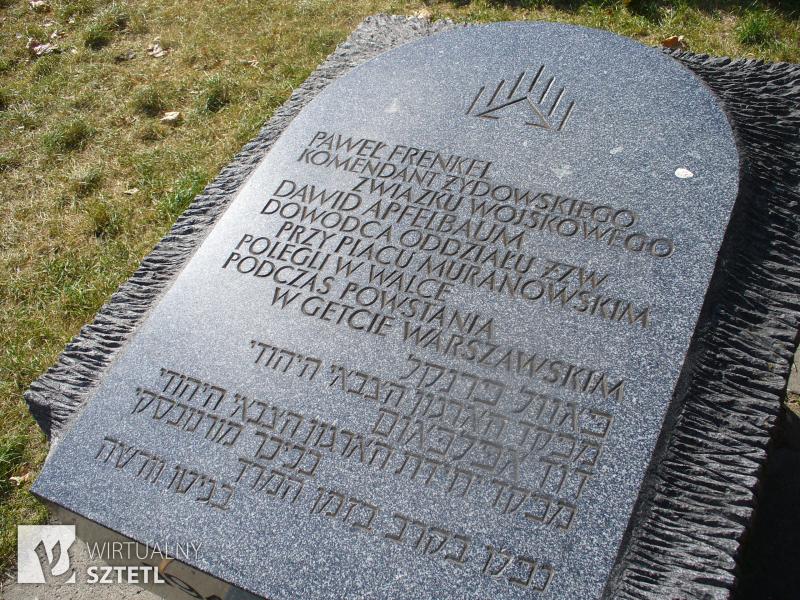 The Jewish Military Union (ŻZW – Żydowski Związek Wojskowy) – clandestine armed organisation, most likely established in the Warsaw Ghetto in the autumn of 1942.

There are few fully reliable sources of information on the activities of the ŻZW as almost all of its members perished without leaving behind any accounts; none of the staff of the command survived the war, and none of its administrative documents have been preserved. Additionally, many pieces of information believed for decades to be historiographic facts turned out to be mere confabulations and myths. For example, the supposed founder of the ŻZW, Mieczysław (Dawid Moryc) Apfelbaum (a square in Warsaw was named after him in 2004) turned out to be a fictitious figure. The ŻZW was formed by activists of the National Zionist Organisation and its youth wing, Betar. The organisation was formed after Revisionist Zionists were declined the possibility to join the ranks of the Jewish Combat Organisation due to deep-running political disagreements dating back to the pre-war period. Both organisations were created and operated concomitantly. The leaders of Betar, including its head, Menachem Begin, had left Warsaw in September 1939. Moreover, a large group of Betar members previously sent to work in land estates near Hrubieszów had been murdered during the “Reinhardt” campaign in 1942. The Revisionist Zionist circles thus lost many prominent members, and therefore less-known activists became the leaders of the ŻZW. The post of the military commandant was taken by Paweł Frenkel (?–1943), a man whose biography and appearance remain unknown; it is not even certain whether Paweł was his real name or an alias. Frenkel’s deputy was a journalist called Leon (Arie) Rodal (1913–1943). The pre-war activists of the New Zionist Organisation – Dawid Wdowiński, Michał Stryjkowski and Dawid Szulman – were involved in the activities of the ŻZW. One of the reports also mentions Natan Schulz, Salek Hazensprung, Eliahu Halberstein, and Yitzhak Bielawski as members of the ŻZW command.

The ŻZW did not manage to establish contacts with the Home Army, whose headquarters was probably not even aware of the existence of any other conspiratorial organisation in the Warsaw Ghetto apart from the ŻOB (Jewish Combat Organisation – Żydowska Organizacja Bojowa). Nevertheless, thanks to individual contacts with members of the Polish underground and purchases made on the black market, the ŻZW managed to accumulate a large number of guns and munition. Emanuel Ringelblum, who visited the headquarters of the ŻZW shortly before the Warsaw Ghetto Uprising, recounted seeing light machine guns, rifles, pistols, and a large number of grenades. Funds for the purchase of weapons came from expropriations and contributions imposed by the ŻZW on wealthy Jews. This strategy sparked occasional conflicts with the ŻOB, which was carrying out similar activities. Before the Warsaw Ghetto Uprising, the ŻZW also organised assassinations of traitors and informers and sabotage actions, such as setting fire to German warehouses. The available sources are often contradictory and do not always make it possible to conclude which of these operations should be attributed to the ŻZW and which to the ŻOB. Before the Warsaw Ghetto Uprising, the ŻZW and the ŻOB held a united front. The main forces of the ŻZW under Paweł Frenkel’s command were concentrated on Muranowski Square, while a group led by Chaim (Szmul?) Łopata operated in the area of the brushmakers’ shop and a group commanded by Pinchas Taub – in the area of Többens and Schultz’s shops. According to historians’ estimations, the ŻZW had between 150 and 260 members on the eve of the uprising.

During the uprising, ŻZW insurgents were engaged in fierce fights in defence of the fortified base at 7 Muranowska Street and other houses at Muranowski Square (one of the people who perished there was Leon Rodal) and in the area of the brushmakers’ shop. The group stationed at Többens and Schultz’s shops probably did not arrive in time to take part in the battle. The Polish and Zionist flag hoisted by the ŻZW on one of the high tenement houses near Muranowski Square (7 Muranowska Street or 42 Nalewki Street) became a symbol of the uprising. The flags were even visible outside the ghetto walls. After three days of fighting, ŻZW combatants escaped from the ghetto through a tunnel dug under Muranowska Street, and hid in the house at 6 Muranowska Street. They were eventually denounced and discovered by Germans; many fell in the resulting battle. Some managed to reach Michalin, arriving to a villa rented by Cezary Szemley (after the war Janusz Ketling-Szemley), a member of the Polish underground cooperating with the ŻZW. After being discovered by the Blue Police and gendarmerie, they dispersed; many were killed in a roundup. A group of insurgents, including Paweł Frenkel, returned to Warsaw. In mid-June 1943, they perished after Germans had discovered their hideout at 11 Grzybowska Street. After the death of its leaders, the ŻZW ceased to exist. Several of its members went into hiding in Warsaw. Only three names of ŻZW privates who survived the 1944 Warsaw Uprising are known.