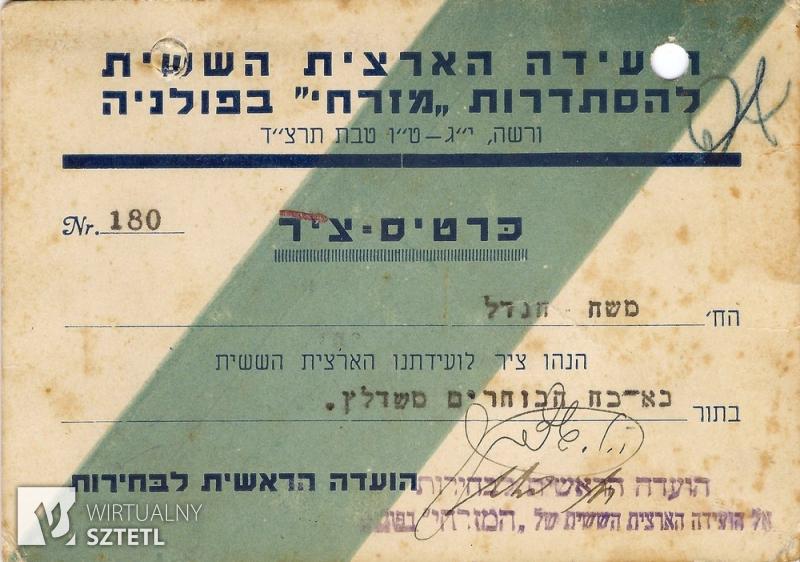 It has attained its final organisational form in 1916 in the Prussian-occupied part of the Kingdom of Poland; in 1918, it also established a presence in the remaining parts of the country. The Mizrachi combined Zionism with the adherence to Jewish religious traditions, with all aspects of life being subordinate to religious regulations. Its programme involved the creation of a Jewish nation state in Palestine, ensuring a cultural and national autonomy of Jews living in Poland; the Mizrachi retained a strong presence in the Eastern Borderlands and in Eastern Galicia. It had three main offices – in Warsaw (former Kingdom of Poland), Lviv (Eastern Galicia) and Cracow (Western Galicia). The Mizrachi remained conflicted with the Agudat Yisrael. In 1918, it joined the Transitional Jewish National Council. During the 1922 and 1928 parliamentary elections, the Mizrachi joined the National Minorities Bloc. Later on, it chose to adopt a conciliatory stance towards the government and engaged in cooperation with the Et Livnot faction of the Zionist Organisation in Poland. The Mizrachi maintained a youth organisation known as the Tseirei Mizrachi [Hebrew for “spiritual youth”] and a workers’ movement known as the Daat VeAvoda [Hebrew for “faith and labour”]. After World War II, it remained the only Jewish party in Poland which operated legally; it continued its activities until 1949. In Israel, it became the most numerous political party; in 1956, along with the Workers’ Party, it formed the National Religious Party, which participated in a number of subsequent government coalitions; in 1957 it merged with the Likud block. Prominent activists of the party included S. Brot, J.H. Farbstein, S.Z. Federbusz, Sz. Feldman, I. Nissenbaum.

The term was created within the framework of the project Zapisywanie świata żydowskiego w Polsce [recording the Jewish environment in Poland], whose author is Anka Grupińska, a well-known Polish journalist and writer, specializing in the modern history of the Polish Jews. The project, initiated in 2006 by the Museum of the History of Polish Jews, consists in recording interviews with Polish Jews from all generations.