Photos: 3
previous next
Go to Gallery

A few weeks after the implementation of the displacement procedures in the Warsaw ghetto, the Germans began implementing a plan to ‘solve the Jewish question’ in the Warsaw district. On 19-21 August they ‘cleaned’ the ghettos in the towns nearest to Warsaw along the so-called Otwock line, and these included Otwock, Miedzeszyn, Falenica and Mińsk Mazowiecki, then on 22-24 August - Siedlce and the villages in its vicinity.

At that time, the Action in Warsaw continued, but the numbers of departing inhabitants of the Warsaw Ghetto were reduced.

‘Between 19th and 25th of August, the action [in the Warsaw ghetto] was run exclusively by the Jewish police. The Germans moved to the provincial towns to liquidate the Jewish centres there’ [Pamiętniki z getta warszawskiego. Fragmenty i regesty (Diaries from the Warsaw Ghetto. Fragments and regestas), edited by M. Grynberg, Warsaw 1988, page 115].

On August 18, 1942, Karl Brandt, a Gestapo officer responsible for the Great Action, came to Otwock from Warsaw. The ghetto liquidation action began on August 19 at 5:00 am. It was conducted by Vernichtungskommando from Warsaw under the command of Brandt with the help of Trawniki-männer (wachmen), local gendarmerie and blue police. The action in this ghetto, as in others, ran according to the same scenario: the wachmen, the gendarmerie and the blue police surrounded the ghetto with a tight cordon so that no one could escape. Then, the Germans gave instructions to the Judenrat on the course of deportation, and the disoriented Jews were driven out of the houses and hiding places into the streets and the gathering places from which they were taken to the Treblinka II death camp. The action was brutal. During its course, the Germans murdered there about 3,000 people. Some of them were murdered and buried in a collective grave at Reymont Street. During the ‘cleaning’ of the sanatorium ‘Zofiówka’, 300 mentally ill patients were shot, including Julian Tuwim's mother. The patients in the ‘Brijus’ sanatorium who were not able to reach gathering place on their own met the same fate. According to witness reports, the children of the ‘Brijus’ were murdered by having their heads shattered against the walls. During the first day, about 8,000 Jews were taken from Otwock to Treblinka II.

On August 20, 1942, the Germans began liquidation of the ghetto in Falenica (an outer part of Warsaw), and its 5,000 inhabitants were also transported to Treblinka II. They were accompanied by Jews from the ghetto in Radość, who were driven off on foot to Falenica a few days earlier, and by Jews from Miłosna (part of outer Warsaw), Zakręt and Wiązowna transported there on August 17, 1942. About 200 people were killed on the spot. Before the transport, about 100 Jews were selected for work in the local sawmill. 1,500 Jews were brought from the liquidated ghetto in Rembertów (the outer part of Warsaw). Approximately 150 small patients from the Vladimir Medem Sanatorium in Miedzeszyn together with their teachers (including Doctor Tola Minc) were also included in the transport. The educators wanting to save some of their pupils have ordered them to flee and hide from the Germans, in the nearby bushes. This was also attempted by working in the Sanatorium Mania Rozen-Zygielbojm (wife of Szmul ‘Artur’ Zygielbojm) and her 16-year-old son Tuwia. Unfortunately, like most, they were found in bushes and together with all others taken on a train and then killed in the gas chambers of Treblinka II. On the way, the train stopped to take to the camp several hundred Otwock Jews who had cleared the ghetto after its liquidation.

On August 21 began the liquidation of the ghetto in Mińsk Mazowiecki. The scheme of the action was very similar to the earlier ones. The Jews were crowded first in the Market Square, where they had to sit still till the evening; then, they were rushed for about 2 km to the railway station, where they had to wait on the ramp the whole night, so that in the morning of August 22 about 4,000 Mińsk Jews were taken to the death camp. Around 1,000 people were killed on the spot – the infirm, the old, the little children, and even some random people, or those who did not want to go to the gathering place voluntarily. On the site of the Schulz mill, members of the local Judenrat were shot, apart from Mordka Kirszenbaum who volunteered to join the transport to Treblinka II. Some 370 skilled workers were left on the site. The Germans employed them at the Wehrmacht and Rudzki’s factories.

On August 22-24, the ‘expulsion staff’ came from Warsaw and, with the help of the local police and gendarmerie, conducted the Action in Siedlce and neighbouring towns. The gathering site was the old Jewish cemetery in Siedlce. There, on the first day of the Action – August 22, were driven the Siedlce Jews who, sitting on the ground, had to wait until the next day. The slightest move could end in being shot dead. Then, the Germans made a selection, and about 10 thousand persons declared unfit for work were rushed to the railway station and from there they were taken to Treblinka II. The action was continued, and on August 24, in the next transport, the Germans drove away about 5-6 thousand Siedlce Jews. The Germans shot on the spot about 100 patients and staff of the Jewish hospital at 1 Maja Street (close to Świrski Street). For a few days, the perpetrators searched the ghetto and murdered those who managed to hide initially. Afterwards, they formed the so-called remnant ghetto, which existed until November 28, 1942, when its last inhabitants were also taken to Treblinka II. Also this deportation was carried out in a very brutal way. People who did not want to voluntarily join the transport as well as small children, the sick, the old and the infirm, not able to carry out orders of the Germans, were shot dead on the spot. Nearly 600 people were murdered.

On August 22, the Germans liquidated the ghetto in Mordy, and its inhabitants – about 3,500 people were rushed on foot (for about 17 km) to Siedlce, to be taken from there to Treblinka II. The same happened to about 5,000 inhabitants of the Łosice ghetto, who, on August 22, were rushed on foot over a distance of some 30 km to Siedlce. Only tiny children and older women were transported by carts under the escort of the German mounted guards. They also had to wait at the Jewish cemetery for the train to Treblinka II. There, the Germans fired on people who did not keep up the pace on the road to Siedlce, and then at the cemetery. In Łosice, the torturers left 200-300 Jews, to clear the ghetto after the deportation action. Afterwards, they put them in the so-called residual or small ghetto, which they liquidated on November 27, 1942. Among the Jews from Mordy and Łosice, there were also about 3,000 Jews from Sarnaki who were deported to these ghettos on May 15, 1942. On August 23, the transport from Siedlce left for Treblinka II. In this way, the Germans put an end to the Jewish settlements in Siedlce, Mordy, Łosice and Sarnaki.

For a number of days-weeks after the Action, the Germans searched for the hiding Jews and killed them as soon as they found them. In each of these ghettos, after the selection, they left from a dozen to several dozens of people who had to ‘clean up’ after the crime. Some of them were given the ‘reprieve’ of extending their life for several weeks-months by serving the needs of the Third Reich.

‘Before the very end of our stay, they tell us to dismount the barriers, the ghetto officially no longer exists, the last Jews have to clean up the last signs of the Jews’ existence in Otwock. We remember our conversations with our wives, at the beginning of the ghetto uprising. How will it ever look, once after the war, when the barriers will be abolished? All the Jews will dance in the streets: the war is over, finally they are free people again. But nobody expected such an end of the ghetto. The times of the prophets have been gone forever.’ [Calek Perechodnik, Spowiedź (Confession), edited by D. Engel, Warsaw 2011, pages 139-140].

The mass murder committed in these few towns in the province of the Warsaw district was only a prelude to what the Germans did in other towns where ghettos existed, in the following weeks of 1942.

More information see, among other sources: 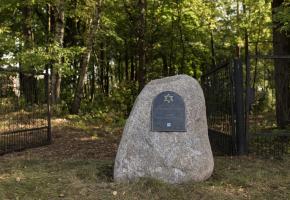 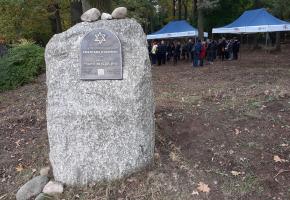