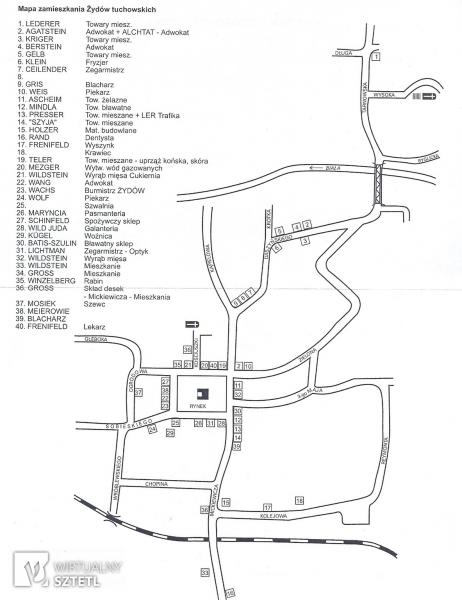 Jews settled in the town of Tuchów relatively late compared with other towns in the region. The poll tax register of 1662-1676 indicates that 15 towns in the province were inhabited by Jews, however, Tuchów was not mentioned in the register.[1.1]

In 1765 there was a Jewish community which was subordinate to the kehilla in Tarnów. It numbered 18 members (5 families). A few years later, the census conducted by the Austrians revealed that the Jews in Tuchów constituted a very low percentage of the total population as there were only 37 Jews among 1,229 Christians.[1.2]

The Jews were granted official permission to settle in Tuchów in 1854. Afterward, their number was constantly rising, and the community began to flourish. A new post office was established, a wooden bridge over the Biała River was built, and a tannery that provided raw materials for shoe-making operated in Tuchów. In the mid-19th century, there were 60 shoemakers, who produced 12 thousand pairs a year. The economic revival resulted in the establishing of a railway line from Tarnów to Leluchów.

As the Jews in Tuchów were poor, in 1895 they submitted a request to the Diet of Galicia and Lodomeria in which they asked for help to buy land for a synagogue. In 1897 an organization of Ahavat Zion was established in Tarnów. The organization had a branch in Tuchów. This provides evidence that the Jews of Tuchów were in close relation with and dependent on the Jewish community of  Tarnów.[1.3]

In Galicia and in the Kraków Province, the majority of rabbis were Hassidic Jews linked to the tzadik of the Halbersztam dynasty. Similarly to Wieliczka, Podgórze, Skawina, and Jworzno, the Fränkel family was played a dominant role in religious life for many years in Tuchów.[1.4] In 1892 Izaak Fränkel was the rabbi in Tuchów while Szymon Freundenfeld was an assessor.[1.5]

In 1904 the Jews of Tuchów were accused of committing ritual murder. After a quarrel of a peasant and his sister, she escaped and hid in the loft of the house belonging to a Jewish butcher where she attempted to commit suicide. The butcher noticed blood dripping from the ceiling, so he dashed to the loft where he saw a Christian girl lying in a pool of blood. When it was revealed, a group of Christians wanted to take revenge on the Jews, accusing them of killing the girl as a human sacrifice. Although the girl, who survived, told the police the truth, the animosity of the Christians towards the Jews was not constrained. It led to broken windows in houses and shops belonging to Jews as well as to other forms of vandalism.[1.9]

As World War I began, the majority of the Jews of Tuchów decided to withdraw together with the Austrian army. Only 40 Jewish dwellers of Tuchów remained in the town soon captured by the Russian forces. Russian soldiers plundered the town and raped local women. They destroyed the interior of the synagogue. Fortunately, Jews managed to save the Torah and other valuables.[1.1.9]

In the Austrian army the Jews constituted approximately 3% of all soldiers. This percentage must have been higher in the divisions fighting in Galicia than for the entire Monarchy. The corpses of Jewish soldiers were buried at military cemeteries situated in Tuchów among other locations. Unfortunately, the necropolis and the Jewish cemetery were completely destroyed during World War II or immediately afterwards. Similarly, cemeteries in Biecz, Myślenice, Ołpiny, and Tuchów were desecrated during the Second World War.[1.10]

During the interwar period, the Jewish community living in Tuchów was in a bad financial situation. They could hardly collect the money needed to pay the remuneration for the rabbi—Shalom Aliwic (Niemetz). In that situation, the community considered emigration associated with Zionist ideology. The General Zionist Movement was active in the town at the time as was Hashomer Hatzair and Akiba. The Zionist organization in Tuchów maintained a library and reading room that was a cultural center for all the Jews of Tuchów.[1.1.9] Orthodox Jews, however, were the dominant political force. In elections to the Jewish religious communities in 1926, 75 people were entitled to vote. The Orthodox won 12 seats and 4 seat were allotted to nonpartisan candidates. Other groups such as Zionists and Progressive parties did not win any seats. Dr. Ozjasz Altstadt and Markus Gross were members of the commission during the elections.[1.11]

During the interwar period, Jews mainly dealt in trade and craft, however, some of them belonged to the intelligentsia such as Agantstein, a lawyer, or R. Metanomski, a doctor.[1.12] Between 1918-1939 the Jews from Tuchów purchased four trade certificates in Krakowska Izba Przemysłowo-Handlowa (the Chamber of Industry and Commerce in Kraków).[1.13] It illustrates the small scale of local economic activity.

Elderly dwellers of the town remembered Jewish celebrations and holidays. In order to take part in larger assemblies, the Jews would go to Bobowa. The inhabitants of Ryglice often took Jews and the rabbi on their horse-driven carts to Tuchów, from where the Jews continued their journey by train.[1.14]

At the outbreak of World War II, many Jews fled east, however, many roads were soon blocked by the Nazi Germans. A great number of refugees returned to their homes. In the second week of the war, Germans set fire to the synagogue and murdered a few Jews. German soldiers cut off beards of the Orthodox Jews, forced people to work,  burglarized Jewish houses and shops.

In December 1939, all Jews aged over 13 were gathered in the school building. Those who did not turn up were threatened with death. The Germans selected 15 people and took them in an unknown direction. A few months later, a peasant found corpses in a forest in the vicinity of the village of Tarnowiec. Through paying a huge bribe to the Germans, the Jews could identify the corpses and take them to the cemetery in Tuchów. On the day of the funeral nobody was allowed to leave their homes; only member of the burial society were permitted to take part in the burial of the murdered people.[1.1.9]

In 1940 the Germans caught Jews who were praying in the house of the Weiss family situated behind the burned synagogue. Everybody was murdered and their grave has never been found. Some people claim that their bodies were buried in the yard at the house, while others believe that the corpses were allowed to be taken to the Jewish cemetery in Tuchów.[1.1.9]

The ghetto in Tuchów was established in June 1942 in the southern part of the town. Not only were the Jews of Tuchów confined there but also the Jewish inhabitants of Ryglice. On 22 July 1942, Jews from Ryglice were dashed to Tuchów and then transported to the extermination camp in Bełżec. On that day Maria Kantor, a convert to Catholicism, died. She was still a Jew in the eyes of the Nazis, so she was murdered.[1.1.14]

On 10 November 1942, the SS commander-in-chief, Kruger, issued an order to liquidate the ghettos in Brzesko, Dąrbowa Tarnowska, Tuchów, and Nowy Sącz. The imprisoned people were taken to Bełżec, and the Germans left only a group of several people in the ghettos who were to tidy the site. After the war, the Jewish community did not revive.