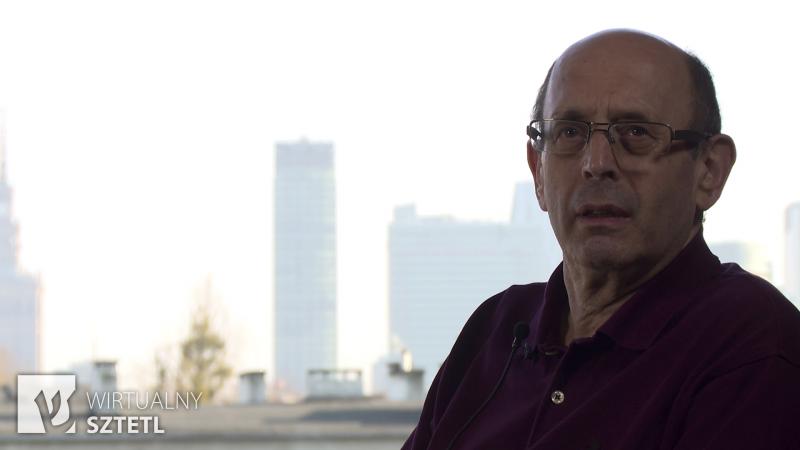 Szymon Fisz was born in Astana (formerly Akmolinsk) in the Soviet Union in 1944. Together with his mother, who came from Warsaw, and a step-brother, Szymon Fisz came to Poland in 1946. Here, the older son went to live with his father in Bydgoszcz and was  separated  from the mother. After several months, Szymon Fisz’s father joined  the family . The parents never married, and after several years they parted; the mother had another child with a different partner - Szymon Fisz’s step-sister. The family moved to Legnica located in the so-called Recovered Territories. His mother worked at the tailors’ cooperative “Jedność”, while the father worked  throughout his life as a trainer in sports clubs, and in 1946 he set up the Jewish Sports Club “Gwiazda” in Legnica. Szymon Fisz  attended a school run by the Children’s Friends Association (TPD) in Legnica, and then  a secondary technical school in Dzierżoniów. He graduated  with a degree in electronics from the Wrocław University of Technology. For many years, he travelled as a participant and later as an instructor to summer camps run by the Social and Cultural Society of Jews in Poland (TSKŻ), where he met his future wife - Małka - who came from Wrocław. They both worked in engineering-related posts until working in their professions became impossible. In the years 1968-1970, Szymon Fisz completed his military service in Trzebiatów. After his military service he tried to get a job in Wrocław as a railway station manager.  His wife could not find any employment as a result of anti-Semitic discrimination (officially she was refused  the job she applied for due to being overeducated).  In 1973, the Fish family, together with their two children, decided to leave Poland for Denmark. Szymon Fisz lives with his family in Copenhagen, where for many years he worked as an electronic technician. He is currently retired and dedicates his time to his favourite sport - table tennis.

The conversation took place in a conference room at the POLIN Museum, on the third floor, after making an appointment by email and agreeing on the details just before the interview. After the interview (portrait of the Interviewee), footage was taken of some archival photographs belonging to the Interviewee.