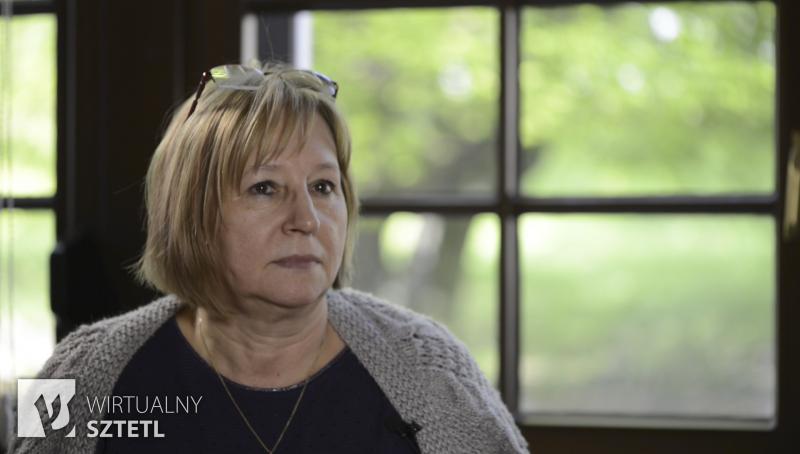 Sabina Chrapek née Hoffman was born in 1950 in Wałbrzych. Her mother was Polish and her father, a Polish Jew, was the famous Jewish activist, Ludwik Hoffman, prisoner of the Gross-Rosen subcamp located in Wałbrzych. For many years her father worked as a procurement buyer. Sabina Chrapek attended a Polish school. In her family home, both Jewish and Catholic holidays were celebrated. In 1957, together with her father, she travelled to Israel on holiday to visit his family. In 1968, because of her family ancestry, she was not allowed to take her secondary school final examinations. Years later, she understood that she fell victim to antisemitic attitude of her teachers. Sabina Chrapek works as an instructor at the Social and Cultural Society of Jews in Poland (TSKŻ) and as an archivist at the Gross-Rosen Museum.  Her husband used to be a miner, however, he lost his job as a result of the economic crisis. He has set up a catering company. They have two sons. Sabina Chrapek maintains regular contact with the extended family residing in Israel. She does not feel alien in Israel, although they consider her a gentile there. In relation to identity issues, she defines herself as a person subjected to uncertainty: for Jews she is not Jewish enough, and for Poles she is not Polish enough.

The recording was conducted in a conference room in the documentation section of the Gross-Rosen Museum in Wałbrzych.