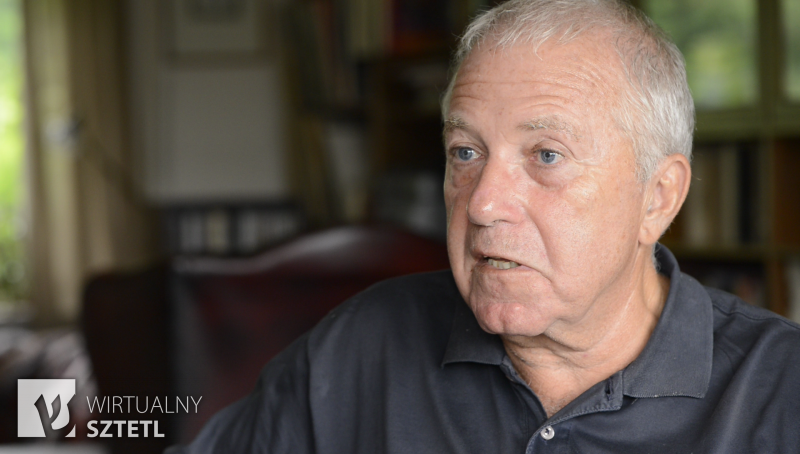 Jan Krzysztof Melchior was born in 1948 in Warsaw. His parents met in France where they lived through World War II. In 1933, his father left for France to begin his medical studies. Jan’s mother, then sixteen years old, was sent to France by the Communist Party of Poland (KPP) and thus avoided imprisonment in Poland. Jan’s parents participated in the Civil War in Spain and were interned there.  In 1939, they got involved in the French resistance movement and therefore, they were entitled to the French citizenship after the war. In 1946, however, they decided to return to Poland.

They arrived in Poland in 1946 and both begin to work in the Citizens’ Militia. Jan Melchior spent his childhood In the Mokotow District of Warsaw. He belonged to the so-called “General Walter’s youth” and attended Stefan Batory High School. He was brought up in a secular home without any elements of the traditional Jewish religious observances. He participated twice in Jewish summer camps organized by the Socio-Cultural Association of Jews in Poland (TSKŻ). He attended the Association’s club at Nowogrodzka Street in Warsaw. He participated in the meetings at the Krzywe Koło Club. His distinctive feature when compared to his peers was the lack of distant family and relatives. The only living cousin immigrated to Israel in 1956. Jan planned to study medicine in Poland but did not pass the entrance examinations.

In 1968, he was a sophomore at the Faculty of Biology of the University of Warsaw. He took part in the 8 March rally. Initially, he was elected to the Students’ Committee at the Faculty of Biology of the University of Warsaw, however – observing the intensifying anti-Semitic campaign – he gave up fearing that his origins could have been used by the authorities. He was not expelled from the University, yet he was interrogated several times at the police headquarters. In summer 1968, while staying in the village Tleń, he learnt about the invasion of Czechoslovakia by the Warsaw Pact troops. “For me it was a signal that in that system, in that country, nothing could be done. It was time to leave”. In 1969, he left for Sweden by train via Berlin and Oslo. He was one of the first Jewish immigrants from Poland who reached Göteborg. After his arrival, he got in touch with the Jewish community which provided him with an apartment. Contrary to a large group of March ’68 immigrants, he was not sent to the Immigration Centre.

In Göteborg, he continued his microbiological studies commenced in Poland. Following the graduation, he had a chance to undertake the doctorate studies. However, he gave up and began to study medicine. He became a general physician. He rejected an offer to work in a hospital. He decided to work in a remote place in northern Sweden. Then, following the birth of his son, he and his wife decided to move to Urlicehamn, a settlement in the south of Sweden.

After having obtained the Swedish citizenship, Jan Melchior tried to visit Poland for Christmas. When he left the ferry in Świnoujście, he was denied the entrance to the country. The following year, he flew in to the Okęcie Airport and got the permission to enter the country. During a talk in the Grand Hotel in Warsaw, secret service agents gave him an offer to cooperate. He refused. After his return to Sweden, he informed the Swedish security authorities on that unsuccessful attempt to enlist him by the Polish Secrete Police (SB).

In Sweden, Jan Melchior discovered the religious aspects of Jewish identity for the first time. He became a member of the Jewish community and also attended the course of Hebrew. Nowadays, he is working as a physician. In 1969, he went to Budapest to meet his father. There accompanied by his father – he visited a synagogue for the first time. “Now, I think Jewish culture is rather of a fundamental importance for me. I did not think so then. I felt a hundred percent Polish. So, certain things change”, he says.

The interview took place in the interviewee’s house in Urlicehamn (Sweden).