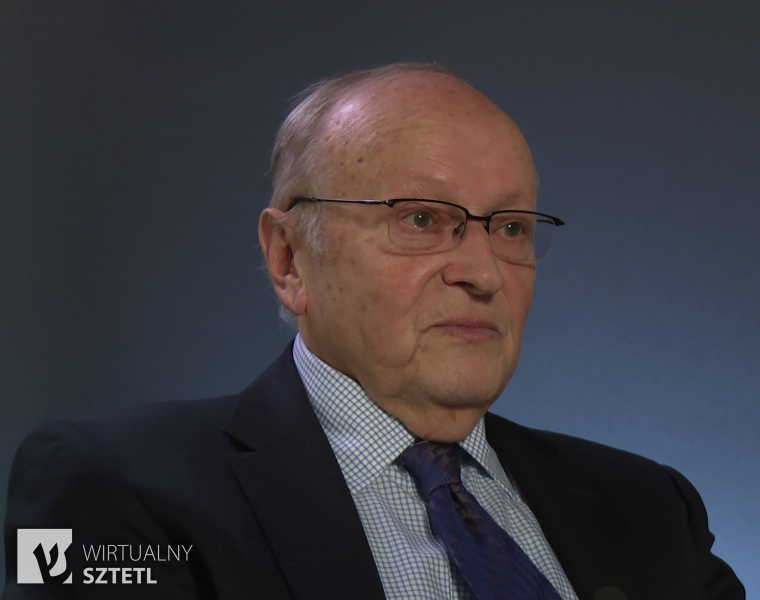 Edward Mersyk (Malinowski) was born in Warsaw on 14th May 1939. His father was born in Kovel, Ukraine, while his mother came from Warsaw. When World War II broke out, the family was living on ulica Nowolipki, which later became a permanent part of the ghetto. The family lived together in an apartment. In the ghetto, his father worked at brush-making, while his mother mended German Army uniforms, in the “sheds”. When he was a little boy, he was mainly looked after by his grandfather.

One of Edward Malinowski’s earliest memories was, at the same time, one of his most traumatic experiences during World War II. When he was barely four-years-old and his parents were at work, he was in the apartment with his grandfather.

“One day (…) the Germans conducted an operation on the ghetto and I remember the we, together with my grandfather, ran into the attic of the building in which we were living. (…) My grandfather was very religious (…) and he began to pray. He was covered in a prayer shawl just as two Germans entered. (…) He came up to my grandfather (…) and he began beating him with a flask.”

Then both he and his grandfather were taken out of the apartment and, under arrest, were taken to the site in the Warsaw ghetto known as the Umschlagplatz. When his father returned from work and realised what had happened, he decided to bribe a Jewish policeman in order to regain his son. That was the last time that the interviewee saw his grandfather. The family escaped for the ghetto and hid in various residential buildings on the other side of the Wisła River. The place where they hid for the longest time was a building on ulica Grójecka, which had been partially destroyed in 1939.

Edward’s father tried to make contact with members of the resistance in Warsaw. One day, a man appeared at the apartment. He was to take his father into the forest. A few days later, the men, who had led his father to the partisans, returned asking for his coat. The family then knew that they had taken his father straight to the Gestapo.

Edward, together with his mother, aunt and cousin, remained in the apartment until August 1944, when the Warsaw Uprising broke out. The area where the apartment was located was bombed by German soldiers. They fled to a garden allotment, where they spent one night. They then hid in various towns around Warsaw. For the longest period, they lived in Żyrardów, where they remained until liberation.

Following liberation, they lived in his aunt’s old apartment on ulica Marszałkowska. The building had survived.  Edward graduated from Staszic High School, formerly named Gottwald. He began playing the violin and attended music school. For the next two years, he studied musicology in the History Faculty of Warsaw University. He then attended the Medical Academy. There, he met his future wife and won a doctoral scholarship. In March 1968, he, his wife and daughter were in Warsaw. They decided to emigrate, mainly to ensure their daughter’s safety. They stayed temporarily in Austria and in Italy, before finally immigrating to the United States in 1969. Edward moved to Detroit and became an outstanding cardiologist in the Sinai-Grace Hospital.

The interview was carried out at the POLIN Museum of the History of Polish Jews.