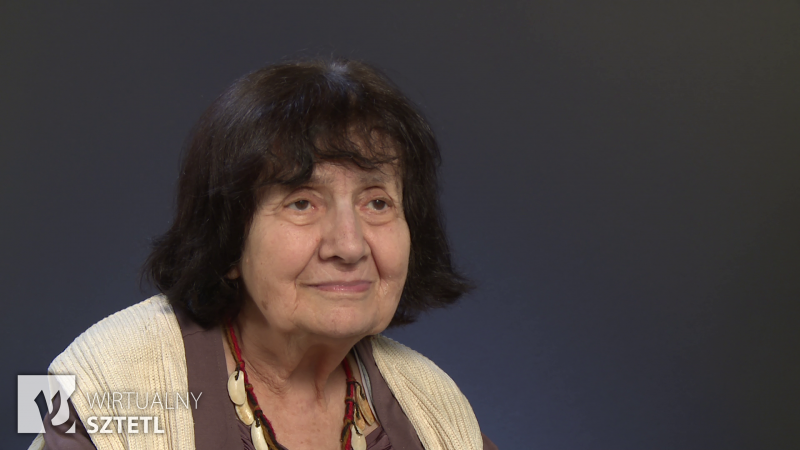 Her father came from Radom and was a historian, student of Professor Tokarz. He specialised in uprisings; shortly before the war he published a doctoral thesis titled “Peasant Interests in the November Uprising”. After being transferred to Białystok, he was the director of archives but was later removed from his post for communist views. He was conscripted into the Soviet army after the German troops made an incursion into Białystok.

Her mother, Wanda, was a classical philologist. She worked as a teacher at lower secondary schools in Łódź, but lost her teaching qualification due to her political views and switched to office work. She was arrested in 1941 by Germans or Ukrainians.

Before the war, Katarzyna Meloch started attending a private Jewish school. No Jewish holidays were celebrated at her family home (at 49 Królewska Street in Warsaw; the building burned down during the bombings in 1939), her parents identified primarily as Poles. In 1939, the fled from Warsaw to Białystok, where they were found by Germans in the summer of 1941.

After her father was conscripted and her mother was arrested, Katarzyna Meloch was sent to a Jewish orphanage at Częstochowska Street within the Białystok Ghetto, where she spent roughly half a year. As a result of the efforts of her uncle Jacek Goldman, she was transported to his home at 12 Elektoralna Street within the Warsaw Ghetto. In August 1942, she was brought out of the ghetto by a nurse (the operation was organised by her uncle) and reunited with her maternal grandmother, Michalina, who had escaped from the ghetto before. She stayed at Father Boduen Children’s Home, where she was given the false identity of Irena Dąbrowska. After that, until the end of the war she stayed at an orphanage managed by Sisters Servants of the Blessed Virgin Mary in Turkowice.

After the war, she moved in with the wife of her uncle Jacek Goldman in Saska Kępa. She attended Maria Curie-Skłodowska State Secondary School No. 12. She ran from her uncle’s wife to her paternal grandmother, who had returned from Siberia together with her daughter. She studied Polish philology; initially, she worked as a researcher, but later she decided to go into journalism. She has a daughter, as well as a grandson and granddaughter.