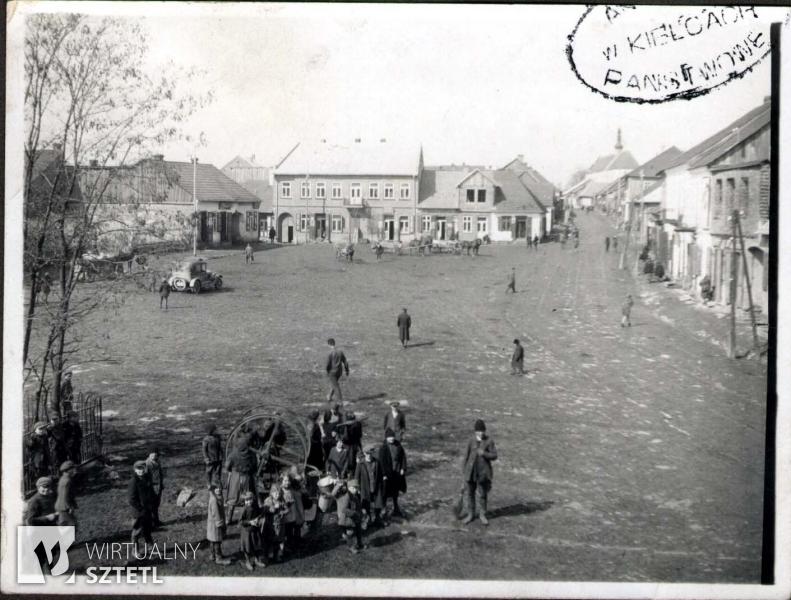 Bodzentyn was one of the towns which held the de non tolerandis Judaeis privilege[1.1] forbidding Jews to purchase real estate within their area. The ban was abolished in 1862, which enabled Jewish people to settle in previously inaccessible localities.[1.2] The sudden influx of Jews into Bodzentyn was very noticeable, especially because most of the newcomers were craftsmen.[1.3] According to Florentyna Teresa Rzemieniuk, in 1789, artisan production in Bodzentyn was the exclusive domain of Poles; in 1846, there were already 12 Jews among the 137 craftsmen in the town, and in 1866 – 25 Jews among 154 craftsmen.[1.4] The Jewish competition proved to be so successful that in 1900, only 5 from among the 65 shops operating in Bodzentyn were owned by Christians.[1.5]

The date of the construction of the first synagogue in Bodzentyn remains unknown. It was a wooden building destroyed in a fire in June 1917. It was replaced with a brick construction in the years 1927–1929. The synagogue was one of the few buildings to rise over the sea of low, single-storey wooden houses dominating the town. It was oriented towards Jerusalem and had a shingle roof; the main entrance was located on the western wall.[1.6] In 1931, the technical condition of the building was described as “good.”[1.7] The synagogue was probably located on Bożnicza Street, next to the Catholic church.[1.8] It consisted of two rooms for men and two for women, all of them of different sizes. It had a total volume of 920 m³.[1.9] Apart from the synagogue, the Jews of Bodzentyn also had a mikveh located at Kielecka Street.[1.10] Unfortunately, the bathhouse did not meet basic sanitary standards. As concluded in the control report of the sanitary committee of 1927: „The bathhouse is built in a very unsuitable place, right next to the street. Therefore, the water from the baths is let out to the gutter, which runs straight to the river […].”[1.11]

As a result of the disastrous state of the building, the mikveh was closed. It was only in 1937 that the Bodzentyn Village Assembly petitioned to the local authorities for a permit to erect a new bathhouse.[1.12] The construction works were halted in 1939 due to financial struggles.[1.13]

Another important institution of the Jewish community was the cemetery, which nowadays is situated on the slope of Góra Miejska (Town Hill).[1.14] It was a sacred, revered site. The matzevot placed at the cemetery were richly decorated, often with motifs suggesting the profession of the deceased person. The tombstones were adorned with ornaments depicting symbols, plants, animals, and everyday objects.[1.15] The oldest matzevah at the cemetery dates back to 1870, the newest to 1934. The cemetery was fenced and guarded – a small house for the watchman was erected on the premises.[1.16] Apart from the synagogue, mikveh, and cemetery, the Jewish community also ran a kosher slaughterhouse.[1.17] It was located at Opatowska Street.[1.18] An example of typical Jewish dwellings of that period is the house once inhabited by Moszek Trojanowicz, located at 79 Bożnicza Street.[1.19]

The rabbi was the highest religious official in the community. In the interwar period, two rabbis worked in Bodzentyn: Szmul Hersz Zylbersztajn (until 1920) and Hersz Szwarc (until 1937).[1.20] The rabbi was responsible not only for holding services and assuring that traditions were followed,[1.21] but also for promoting philanthropy, organising the social life of the community, and delivering judgements in Talmudic law.[1.22] The rabbi was an expert on the Torah, teacher, preacher, celebrant, and spiritual leader.[1.23] He also tended to the synagogue, the mikveh, and the cemetery.[1.24]

Several Jewish enterprises operated in the town, including the local transporting line owned by Abus Szafir, Duwek Sztarkman and Co. The company operated a Chevrolet bus called “Wawel.” The driver was Adam Pilawski. At first, the service was available on the route Bodzentyn–Suchedniów–Kielce. After construction works on a new road to Górna had been completed, the bus ran directly to Kielce. A second, rival line was developed by Józef Mazurek, Roman Świderski, and Tadeusz Wójtowicz. They bought an old Chevrolet called “Bodzentynianka,” driven by Stanisław Cielątko. The cost of commute via Suchedniów was 5 zlotys, via Św. Katarzyna – 2 zlotys. After a long period of rivalry, both companies eventually came to an agreement. In order to divide the profits fairly, the bus which belonged to the Poles had a Jewish ticket collector, and the Jewish bus – a Polish collector.[1.25]

During the interwar period, three news-stands operated in Bodzentyn. One of them belonged to Noech Szachter. Located at 15 Franciszka Żwirki Square, it sold a wide range of Polish and Jewish press publications.[1.26] The most popular titles among the local Jews were Haynt, Noyes, Der Moment, Togblat, and Unzer Ekspress.[1.27]

In 1940, a ghetto was established in Bodzentyn. Its population increased from 1,000 in 1939 to 3,700 in 1941. This was due to the influx of Jews from other localities, even from as far as Płock. Among the prisoners of the ghetto was the family of Dawid Rubinowicz, author of Pamiętnik. Towards the end of 1942, all Jews residing in Bodzentyn were rushed to the train station in Suchedniów. They were loaded on cattle cars lined with lime and sent via Małkinia to the death camp in Treblinka, where they were murdered in gas chambers.

The liquidation of the Bodzentyn Ghetto was thus described by Jan Fąfara:

When Germans were deporting Jews from Bodzentyn, they rushed them all to the Lower Square. […] The alarm went off at 8 o'clock. All the bells started to ring. The gendarmes and the Jewish policemen went from house to house, dragging the unfortunate Jews out of their homes. There were maybe 12 gendarmes altogether. They would carry out the ill, the elderly, the decrepit, and children on their backs. Together with Jews from Słupia Nowa, the victims were then led through Wzdół Rządowy and Michniów to Suchedniów. How many hours did the horror last? Ditches were full of corpses, mostly bodies of women, old people, and children. Personal belongings were scattered around them.[1.28]