The 450th Anniversary of the Union of Lublin 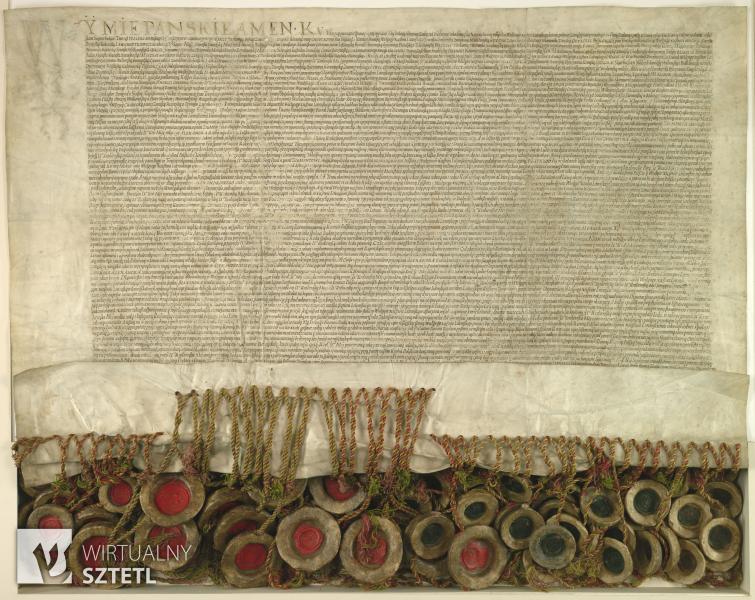 The Union was adopted on June 28th, and signed on July 1st, and the King had finally ratified it on July 4, 1569. On that Friday, which was going by in torrential rain, the Polish-Lithuanian Commonwealth was born with single monarch, common coat of arms, one Parliament (Sejm), the same currency, and mutual foreign and military policies – the life achievement of King Sigismund II Augustus, which was to subsist for nearly next quarter of millennium.

The Polish-Lithuanian Commonwealth was a powerful, yet ethnically and religiously diversified state. It secured the space for Jews whose numbers were growing, and culture thriving. The Jewish Golden Age began which covered the 16th century and the first half of the 17th century. That period of time was described with an unprecedented name Paradisus Iudaeorum, i.e., “The Jewish Paradise”.

In the Polish-Lithuanian Commonwealth, Jews enjoyed a broad autonomy; they had their own self-governments, including the Sejm of Four Lands, a parliament unique in the European scale. Contrary to other countries, they did not suffer mass persecution on religious grounds. Just the opposite – they could develop their science, print their books, and even debate with Christian intellectuals. It was the time of outstanding experts on Jewish religious law. In the Krakow Kazimierz District,  the famous Rabbi and Thinker, Moses Isserles, called Remu, wrote in the centre of an influential Jewish community, the book under the title Mapa (The Map) – containing the collection of customs and religious rules to be observed by the Ashkenazi Jews.

The second half of the 16th century brought yet another change for Jews: encouraged by noblemen, they started to settle down in latifundia – huge magnate estates in the eastern part of the country, the so-called Eastern Borderlands. They began to undertake new professions like lease-holders of inns, mills and breweries, grain traders and cattle drivers. That settlement in the East resulted in extremely rich Jewish culture on the territories of today’s Lithuania, Belarus and Ukraine.

The Museum of the History of Polish Jews invites all those wishing to have a glimpse at the world following the Union of Lublin to visit the Paradisus Iudaeorum Gallery of the Core Exhibition. In the illumination cast by the great map depicting the dense constellation of shtetls on the vast territories of the Polish-Lithuanian Commonwealth, one can see, e.g., the interactive model of Krakow and its Kazimierz District, visit the Virtual Library with the masterpieces of the Hebrew and Yiddish literary productions of those times, or learn how the true religious tolerance looked like in the epoch of the “Jewish Paradise.” Feel invited!