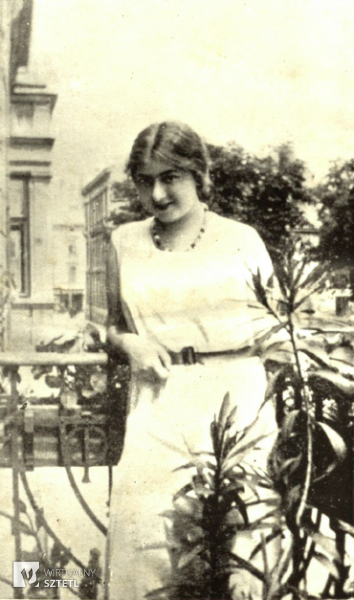 Born as Andzia Regina Eker (July 25, 1912 Lviv – January 1, 1936 Lvov), daughter of Fanna and Samuel Eker. Father was an apothecary and a committed Zionist activist. Mother, maiden name Borak, helped her husband run a pharmacy. In the first half of 1930s, Samuel bought a tenement house in Tel Aviv, which he inhabited with his wife. At that time, a part of the Eker family, including his brother, already settled in the city. Until 1939, the members of Eker family regularly visited Poland, but after the outbreak of the war they never returned to Lviv. They died in Tel Aviv. Ignacy, Anda’s younger brother, after graduating from high school in Lviv, studied medicine in Vienna. However, in 1938, having been exposed to antisemitism, he moved to London. There he graduated from St. Martin's School of Art and founded a family. He permanently settled in Jamaica, the birthplace of his wife. He adopted the pseudonym Andrew Hope and became a respected art critic and artist.

Anda Eker was educated in Lviv. First in the Maria Regina Goldfarbowa Private School, then in the Juliusz Słowacki private high school for girls. In 1930 she enrolled in the Faculty of Humanities at the Jan Kazimierz University. In 1933 she discontinued her studies and went to Palestine to study at a farming school in Nahalal. However, she probably did not complete the course preparing young women for work on Palestinian farms, because she did not work in any of the kibbutzim, and she did not return to study in Lviv.

In Palestine she became acquainted with the representatives of modern Hebrew literature of the time, in particular she befriended the poet Bat-Miriam. There she wrote her best works. The period 1933-1935 was marked by constant journeys between Lviv and Tel Aviv. The poet never concealed the fact that while she was in Poland she longed for Palestine, and while in Palestine for Poland – she considered both countries as her homelands.  She had repeatedly tried to settle permanently in Tel Aviv, but her body was not adapted to that climate, she was also distressed by her longing for Lvov and her seemingly unsuccessful personal life in Palestine. Eker's friends emphasized her extraordinary sensitivity, and also mentioned her poor physical condition, depressions, loneliness and misunderstandings. She wrote about herself: ‘I am like a person who dies of thirst in the middle of the sea.’

In 1935, for the last time she came back from Tel Aviv. She resettled in her family apartment in Lviv. A few months later, she died at the age of twenty-four. The official cause of death is the exhaustion of the body caused by pneumonia, There were also rumours that, as a result of the nervous breakdown and unhappy love for an unknown writer, she committed suicide.  However, this information has not been confirmed.

The first texts she wrote when she was a ten-year-old child. She officially debuted at the age of thirteen in the Chwilki Dzieci i Młodzieży - Children and Youth Moments (a supplement to the Lviv’s ‘Chwila’ daily.) She was a literary discovery of Runa Reitman, the originator of the supplement, a well-known social activist in Galicia. It should be added that Anda Eker cooperated with the editing team of the supplement until her death. Her works for children also appeared in the ‘Dzienniczek dla Dzieci i Młodzieży’ - Diary for Children and Youth (a supplement to Cracow's Nowy Dziennik). The works addressed to older audiences were published in the leading Polish-Jewish magazines, among others, ‘Nowy Dziennik’, ‘Ewa’, ‘Opinia’, ‘Nasza Opinia’, a few poems were published in ‘Nasz Przegląd’. She was associated with the milieu of Polish-Jewish writers collaborating with the ‘Chwila’ daily.  She was friends with Maurycy Szymel, Daniel Ihr, Stefan Pomer, and also with Minka Silberman as well as the authors writing for Lviv’s ‘Sygnały’.

Anda Eker wrote exclusively in Polish. She did not know Yiddish, and too little knowledge of Hebrew prevented her from writing in that language. During her life she published one volume of poems, Na Cienkiej Strunie - On the Fine String (Lviv 1936). The debut collection gained critical acclaim. The influence of Maria Pawlikowska-Jasnorzewska, Beata Obertyńska or Teofil Lenartowicz’s poetry can be found in Eker’s works. According to Michał Borwicz, the volume of poems Na Cienkiej Strunie was ‘a proof of her great and rare lyrical talent.’ After the sudden death of the poet, her legacy was taken care of by her parents and her friends among Lviv writers (including Tadeusz Hollender) as well as the editors of the Zionist children's magazine ‘Okienko na Świat’ – Little Window On the World. In 1937, four volumes of fairy tales and children's poems were published. Three of them were completely devoid of Jewish content: O świerszczyku muzykancie (About the cricket musician), Mama śpiewa kołysankę (Mom sings a lullaby), Słoneczny światek Sunny world). These were mainly reprints from ‘Chwilka’ and ‘Dzienniczek’. The Ojców dzieje (Fathers’ Tales) volume was a collection of texts which Anda Eker wrote between the age of twelve and seventeen. Most of them were devoted to Zionist ideology (among others to Teodor Herzl), as well as Jewish culture and tradition. In the same year appeared the second volume of poetry, Melodia chwili (The Melody of the Moment). It contained mainly reprints from the Polish-Jewish press as well as some previously unpublished poems.