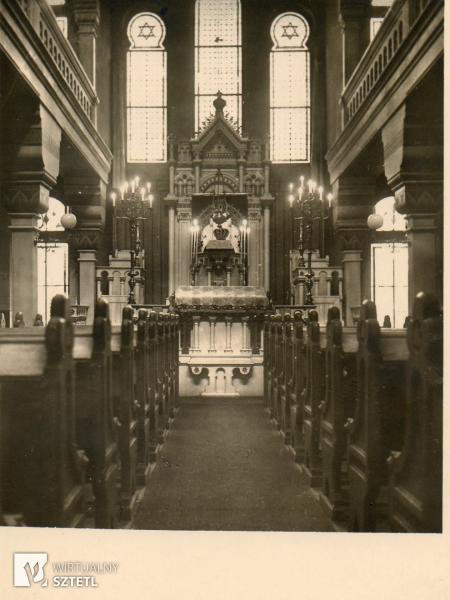 The earliest mention of Jewish residents of Nysa in historical sources dates back to 1319. At the time, Jews most likely lived in a separate Jewish street – Judengasse, where the house of prayer was also located.[1.1]

When Silesia came under the rule of Bohemian kings in 1327, Silesian Jews too became subject to their jurisdiction.

In March 1327, a certain Jew was sentenced to prison by the local jury. However, Bishop of Wrocław Nanker (1326–1341) pled for his release.[1.2] The bishop was also the author of the diocesan statutes of 1311, obliging Jews to wear special hats and round yellow patches on their clothes so that they could be distinguished from Christians.

In the mid-14th century, Silesia was struck by the Black Death epidemic and famine. The local population accused Jews of poisoning wells, which triggered a wave of anti-Jewish violence – in Nysa, a pogrom was carried out on 2 April 1349. The direct cause of the pogrom was the fire of a house of a Jew who had refused to be baptised. As a result of the riots, 40 Jewish households were burned.[1.3] By virtue of an order of Emperor Charles V, an investigation was launched; it led to the conviction of the perpetrators of the pogrom.

The Jewish cemetery in Nysa was most probably established ca. 1350.[1.4]

Another pogrom broke out in Nysa in 1361, sparked by an alleged desecration of the host.[1.5]

In 1410, a wooden synagogue was erected in the town. The first record of the Jewish cemetery in Nysa dates back to 10 May 1423. It was located in the Old Town, opposite the house of Johannes Heider de Nissa. In 1485, the cemetery was commonly referred to as the “Jewish garden.” In 1488, the Jewish community was exempt from paying tax for the cemetery, which may suggest that the necropolis had been closed down.[1.6]

Taking advantage of the hostile attitude towards Jews among the Christian population, at the turn of the 16th century the municipal authorities adopted the de non tolerandis Judaeis privilege issued by King of Bohemia Vladislaus. Jews were subsequently expelled by court decision and ordered to pay a fee of 200 guilders.[1.7] One Jew and his family were baptised and stayed in the town, assimilating into the Christian community.

When Silesia came under the rule of the German emperors in 1526, Silesian Jews too became subject to the imperial jurisdiction. In 1634, Jews returned to Nysa.

In the second half of the 17th century, Polish Jews maintained trade relations with Silesian Jews. Merchants form the Commonwealth would be frequent visitors to markets and fairs in Wrocław, Brzeg, Nysa, and Opole. They traded in bronze and brass wares, tin, silver, grains, hides, spices, southern fruit, cattle, wax, wool, and books.[1.8]

Following a period of mass emigration, the Jewish community in Nysa was revived in the early 19th century. In 1815, a Jewish cemetery was founded in the vicinity of the Catholic and Evangelical graveyards (at today’s Wojska Polskiego Avenue). In 1838, Jews purchased a plot of land at erstwhile Josephstrasse from tax collector August Leubuscher from Wrocław. A synagogue was erected on the parcel.[1.9]

In the late 19th century, Nysa had 278 Jewish residents (among a total population of 11,086 – 2.5%). The local Jews were largely assimilated into the German culture. Among the documents stored in the State Archives in Opole there is the German text of a municipal pledge taken in December 1841 by a merchant settling in Nysa – Louis Schnitzer, father of famous traveller Eduard Schnitzer (Emin Pasha).[1.1.9]

The turn of 20th century saw mass emigration of Jews to the West. Many Jewish inhabitants of Nysa left for Wrocław and Berlin. In 1885, 380 Jews lived in the town. A new brick synagogue was erected at erstwhile 57 Josefstrasse (today’s K. Miarki Street) in 1892. Adjacent to it was the building of the Jewish school.

In the early 20th century, Nysa boasted a cell of the youth wing of the Zionist Organisation and the Association of Jewish Veterans of World War I.

After the rebirth of the Polish state, Nysa remained in the German territory. In 1932, the town had 220 Jewish residents (0.6% of the population). The leaders of the Jewish community were: M. Lewinsky, Max Bloch, and physician Rosenstein. The local rabbi was Ellguther, and religion teacher – Aron Goldschmidt. The Nysa community had jurisdiction over the Jewish populations of Głuchołazy, Otmuchów, and Paczków.[1.10] The last rabbi of Nysa was aforementioned Max Ellguther; he died in 1938.

The events of the Kristallnacht (9/10 November 1938) brought an end to the regular life of the Jewish community of Nysa. The pogrom took a violent turn. The synagogue in Nysa was vandalised, but not set on fire. Nazi squads demolished Jewish community buildings, workshops, a pharmacy, a dentist’s office, 11 shops, and 31 Jewish households. Most Jews soon left Nysa, with only 93 remaining in the town. In March 1939, merchant Alois Fandrych purchased the building of the synagogue.

At the turn of 1938 and 1939, Jews had their rights gradually limited with bans on entering cinemas, theatres, public swimming pools, and municipal parks. They were also prohibited to use couchette cars on trains or own radios. In Nysa, Jews were only employed to perform the “dirty work,” for instance cleaning the streets.

During WWII, in July 1942, Jews from Nysa were transported to the Auschwitz-Birkenau concentration camp.[1.11] The foreclosure of the Jewish cemetery by the Gestapo in June 1943 marked the symbolic end of the German-speaking Jewish community in Nysa. The local synagogue was pulled down in 1945.