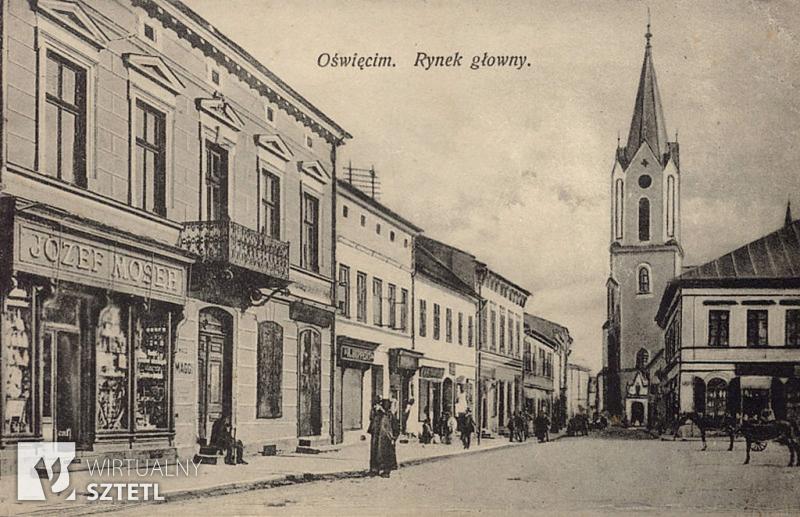 Oświęcim is historically one of the oldest castellan settlements in Poland. The first records come from 1179 when Kazimierz Sprawiedliwy handed over the Oświęcim castellany to Mieszko I Plątonogi, the Duke of Opole. Around 1272, Oświęcim received a city charter based on the Lwówek law in a privilege issued by Władysław I, the Duke of Opole. Another privilege from around that time established an aldermanship in Oświęcim. In the 1280s, the Oświęcim land became part of the Duchy of Cieszyn. On 2 September 1291, the city rights of Oświęcim were confirmed and extended for a new court and economic privilege.

On the sejm assembly in Warsaw on 25 February 1564, Zygmunt II August issued a privilege of incorporation, recognising the Duchies of Oświęcim and Zator (bought out by king Jan Olbracht in 1494) as the part of the Kindgom of Poland. Both duchies were also attached to the Kraków Province as the Silesia County. Their names were preserved. The period of Swedish wars started the economic fall of Oświęcim, which was also frequently ravaged by fires.

After the I Partition of Poland in 1772, Oświęcim was included into Galicia, the territory annexed by Austria. The Emeperor Franz II confirmed all previous privileges and additionally granted the right for running 12 fairs a year. The town was announced municipal and received a new crest.

In the second half of the 19th century, Oświęcim became an important railway junction. In 1856, the Emperor Ferdinand Northen Railway running through the town (stage Trzebnia – Zebrzydowice) connected it with Kraków and Vienna. In 1863, a direct railway connection with Katowice through Mysłowice was established and in 1884 another direct railway to Kraków Płaszów through Skawina was constructed. The town developed economically and underwent radical changes as it was reconstructed after two great fires. On 23 August 1863, about two thirds of the buildings burnt down, including the town hall, the Fara church and two synagogues. The new town hall was built between 1872 and 1875. In 1881, another fire broke out and destroyed part of the parish church with presbytery and vicars’ house, a school, a hospital, and 50 other buildings.

The beginning of the 20th century saw the establishment of new municipal institutions and town’s development. The Oświęcim district was created in 1910. Between 1915 and 1916, a secondary school was opened and between 1917 and 1918 a new housing estate called “Baroque”, “New Town” or “Oświęcim III” was build. On 3 November 1918, Polish Liquidation Committee (Polish: Polska Komisja Likwidacyjna) in Kraków appointed the County Liquidation Committee (Polish: Powiatowy Komitet Komisji Likwidacyjnej), which was the beginning of the Polish civil authorities in the county. Next year the Oświęcim county (excluding Kęty) along with 23 other counties, formed a part of the Krakowskie Province. At that time also the Committee to Help the inhabitants of Upper Silesia was established, and a year later the County Poll Committee. The Oświęcim county was abolished in 1932 and its area was divided between the Wadowice county or Bialsk county; the town itself was included into the latter.

During German occupation, the town was directly incorporated into the Third Reich. On 16 June 1940, the Germans established the Auschwitz concentration camp there (German: Konzentrationslager Auschwitz). At that time the first transport of Poles (political prisoners) arrived. The next years, from 1940 to 1944, were a time of mass relocation and displacement in the town and its neighbourhood. Between 1941 and 1942, another camps were established: in Brzezinka (KL Auschwitz II-Birkenau) and Monowice (KL Auschwitz III-Monowitz), as well as several Auschwitz sub-camps, for example in Trzebinia (KL Auschwitz III Arbeitslager Trzebinia). Around that time the I.G. Farben Company in Dwory near Oświęcim was built. On 19 January 1945, the last “evacuation” transport of prisoners marched out of KL Auschwitz, and the Germans detonated the gas chambers and crematories in Brzezinka. Barracks full of the murdered people's property were burnt.

On 26 January 1945, the Soviet Army entered the camp in Oświęcim and the town was seized a day later. From 1945, reestablishment of the local industry began, including the I.G. Farben company, which was robbed by the Soviets between February and August that year. On 2 July 1947, the Auschwitz-Birkenau State Museum (Polish: Państwowe Muzeum Oświęcim-Brzezinka) was established on the premises of the former death camp. In 1951, the Oświęcim county was re-established, and included 4 towns and 6 collective communities.

On 1 June 1975, as a result of the administrative reform, Oświęcim  was included into the new Bielsko province (excluding the town of Brzeszcze and Jawiszowice community). On 7 June 1979, Pope John Paul II visited the former Nazi German extermination camp KL Auschwitz-Birkenau. In the same year the UNESCO included Auschwitz-Birkenau State Museum in the United Nations World Heritage List. Since 1999, Oświęcim is a county within Małopolskie Province and includes following communities: Zator, Kęty, Oświęcim, Chełmek, Przeciszów, Osiek, Brzeszcze and Polanka Wielka.