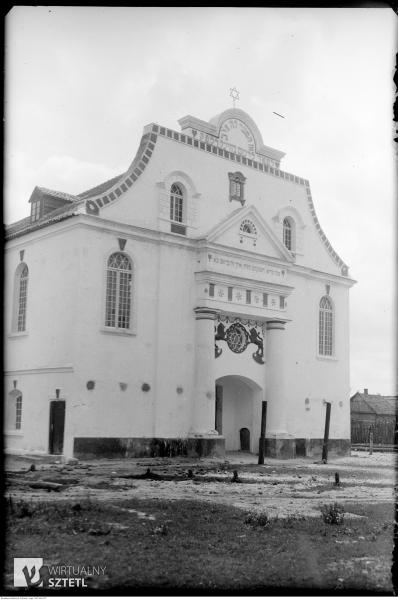 The first records of Jewish settlers in Orla date back to the 16th century, while the Jewish community was established at the turn of the 17th century. According to the census conducted at the beginning of the 17th century (1616), there were 17 Jewish houses and a synagogue in the town. In 1618, Krzysztof Radziwiłł, the owner of Orla, issued a decree allowing all people to freely settle in his domain, regardless of their creed.[1.1]

In the interwar period, Jews constituted most of the inhabitants of Orla, at least three quarters of the population.[1.2]

An important event for all the inhabitants of Orla, especially for Orla Jews, was the tragic fire which broke out in the town in 1937. According to reports, it started in the house of a Jewish woman named Stowa, who ran an oil mill in the building. She did not take due care of the oil, and instead was selling eggs at the Orla market. The oil spilt and caught fire, with the flames spreading throughout the town. As a result, 540 buildings burnt down, including two wooden synagogues. The brick synagogue was also seriously damaged. The Jews quickly began repairing the damage. Building materials were transported from as far as Łódź and Poznań. As the occupation and wartime turmoil started soon afterwards, the wooden synagogues were never rebuilt.

The Germans invaded Orla in September 1939, but they quickly gave way to the Red Army. During the Soviet occupation, the number of Jews in Orla increased from ca. 1,450 to 2,000 in June 1941.[1.3] The town was retaken by the Germans on 25 June 1941. At first, they burnt down ten houses belonging to Jews. Then, the commander of the German troops ordered Rabbi Halpern to make a list of all male Jews aged 10 or older and have them assemble at the market the following day. The men were ordered to wear yellow badges and designated as forced labourers. The people who came late were beaten.[1.1.3] At the subsequent gathering in the synagogue, the Jews were coerced to confess to using Christian blood. The Nazis threatened that refusal to comply would result, among others, in shooting the son of the rabbi. A Belarusian translator named Wiatkowski or Wiotkowski tried to intercede for the Jews. Eventually, they were ordered to surrender their horses and valuables to the Germans. The Torah was defiled in the synagogue. The Nazis ordered 150 Jews to report to forced labour every day.[1.1.3]

In the autumn of 1941, Orla came under the jurisdiction of German civil authorities (Amtskommissar). A 12-person Judenrat was established.[1.1.3] Jews were ordered to mark their houses with yellow signs and forced to pay a high "contribution" to the occupation authorities. Since the Christian inhabitants of the neighbouring villages had been resettled to Orla in March 1942, the Jews were moved to the south-western part of the town, and the Christian (mostly Orthodox) inhabitants – to the north.[1.4]

The Germans began resettling people as early as 1941. The inhabitants of Kolonia Antonowo [mostly adjacent to the Gabrysik Forest – M.M.] were moved to the outskirts of Orla, to Nowa Szosa Street [now Henryka Sienkiewicza Street]. Our people – the Christians – moved into Jewish houses, and the Germans eventually cast out all the Jews to the outskirts of Orla and surrounded this part of the town with barbed wire and a plank fence. This is how two ghettos were created: one smaller and one larger (to the west of the Orthodox church). They set up a gate on Koszelowska Street and forbade anyone to go beyond it. It so happened that some Jewish craftsmen found work in Topczykały – the Germans, when they found out about it, shot them on the spot.[1.5]

In March 1942, a ghetto was established in Orla. It covered the area delimited by the streets Koszelowska, Kleszczelowska, and the post-war 1 Maja. A month later, its perimeter was sealed with a wooden fence. The district was very crowded, with mere two square meters per person, which contributed to the spread of diseases. Four hundred men had to report to forced labour every day. They worked, among others, at road construction for which tombstones from the Jewish cemetery in Orla were used. According to Grzegorz Strelczuk's account:

At that time, the Jews of Orla were already locked in the ghetto. Two or three days a week, they were sent to work on the construction of the road in Orla. Tombstones from the old Jewish cemetery were broken into pieces and the road was paved with them. Local farmers would bring fodder for the horses in sacks, and Moszko would hide meat, groats, and whatever else he could inside the sacks and then smuggled them into the ghetto.[1.1.5]

Our house was sold by the Germans to Rutka, so our entire family moved into the former house of a Jewish blacksmith. It stood by the Orlanka River. Sometimes in the evening, a member of the Wajsztyn family would come to us secretly from the ghetto and hide beans or pork fat under the floor... Everything people had given him. Back then, the Jews ate pig meat despite religious prohibitions. The Jew would say (in Russian [Belarusian – editor's note]): V zhyzni ssiak sluchaietca i biedny bohatomu prysluzytca [“In life it happens that a pauper helps a richman”]. My husband, Sergiusz, and his father, Paweł, had worked for Wajsztyn in a tile factory throughout the entire Sanation period [1926–1939].[1.1.5]

The liquidation of the ghetto began at 5 am on 2 November 1942. The police surrounded the ghetto, and the Jews were informed that they would be sent to work at the Black Sea or in the Caucasus and that they were to take as few personal belongings as possible. Some of the Jews fled, but they returned when the SS threatened to shoot their families. The following day, the Jewish residents of Orla were driven on foot to Bielsk Podlaski. Eventually, they ended up in the Treblinka extermination camp, some of them probably passed through the transit camp in Białystok. A group of ca. 200 craftsmen was transported to the labour camp in Pietrasze, where they sewed winter boots for the Wehrmacht. From there, they were transferred to other concentration camps, but their fate is unknown. There is also no information on any Survivors from Orla.