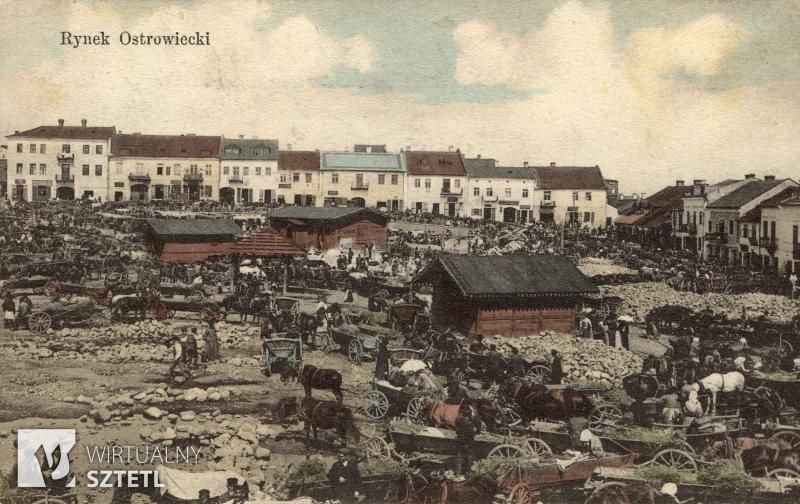 The oldest testimonies of human habitation in the area of the present day town of Ostrowiec Świętokrzyski date back to the Neolithic period. From the Middle Ages, before it was granted town rights at the turn of the 16th and 17th centuries, there was a village called Ostrów on the spot. The Ostrów village was first mentioned in 1369, along with Krystyn of Ostrów of Rawa coat of arms. In the 14th and 15th centuries the village most probably belonged to the Rawita family. Rulers of the village after 1519 were: Szydłowiecki, Zborowski, Tarnowski, Gawroński (of Rawa coat of arms) and yet again Tarnowski families.

In 1597 Jakub Gawroński, the then owner of Ostrów, began construction of a town – it remains unclear when or in fact if Ostrowiec was ever granted town rights. If it was, it happened in all likelihood in 1613, possibly on the basis of the King Sigismund III Vasa privilege.

In the 17th and 18th centuries Ostrowiec was owned by grand magnate families: Tarnowski, Tworowski (Buczacki), Ostrogski, Zasławski, Wiśniowiecki, Lubomirski, Sanguszko, Rogaliński and Czartoryski. In 1614 a parish church was built (it became a collegiate church in 2000).

Following the Third Partition of Poland, Ostrowiec became part of the Habsburg monarchy. In 1809, after the war with Austria, it became part of the Duchy of Warsaw (Radom Department). After the Duchy of Warsaw ceased to exist, Ostrowiec was annexed to the Kingdom of Poland (Sandomierz Voivodeship, later Radom District). In the 19th century Ostrowiec belonged to the Czartoryski family, Lubomirski family, Dobrzański family, Cohen family, Łubieński family and Wielopolski family.

In the early 19th century small rural town of Ostrowiec emerged as a main centre of industry within the Old Polish Industrial Region. In 1816, due to discovery of lignite deposits, ironworks was in operation in Kuźnia. From 1830 iron ore mines were also opened. In 1837 construction of new steelworks began, named Klimkiewicz Steelworks (after its founder, eng. Antoni Klimkiewicz). From then on numerous industrial works were being opened in the vicinity of Ostrowiec. In 1826 the first sugar refinery in the Kingdom of Poland was opened in Częstocice. In 1885 railroad from Radom reached the town of Ostrowiec.

During the 1905 revolution Ostrowiec was a scene of mass workers’ protests, which culminated with the proclamation of a so-called “Ostrowiec Republic” on December 27. The town and the neighbouring counties were now ruled by the Polish Socialist Party, headed by Ignacy Boerner. The Republic ended by mid-January 1906.

In the interwar period Ostrowiec continued to develop, owing to investments connected to the establishment of the Central Industrial Area. Rapid development of the town is best illustrated by growth in the number of inhabitants (15 thousand in 1914, 30 thousand at the outbreak of the Second World War). In 1924 Klimkiewicze was annexed to Ostrowiec. In the same year the town was excluded from the Opatów county and was granted the city county status (part of the Kielce Voivodeship).

The German Army seized Ostrowiec on September 8, 1939. By October it was annexed to the Radom District of the General Government. The occupying power confined 16 thousand Jews to the Ostrowiec ghetto; a vast majority of them perished in Treblinka death camp. The town was an important centre of Polish underground activity at the time of Nazi occupation; arms were produced and conspiratorial press was published. On January 16, 1945 Ostrowiec was captured by the Red Army.

After the Second World War Ostrowiec Świętokrzyski continued to develop as a centre of heavy industry. In 1954 a number of the neighbouring villages were annexed to it, Częstocice and a former town of Denków amongst them. In the years 1951-75 Ostrowiec was a city county within the Kielce Voivodeship; from 1999 it is a seat of the Ostrowiec County (Świętokrzyskie Voivodeship).