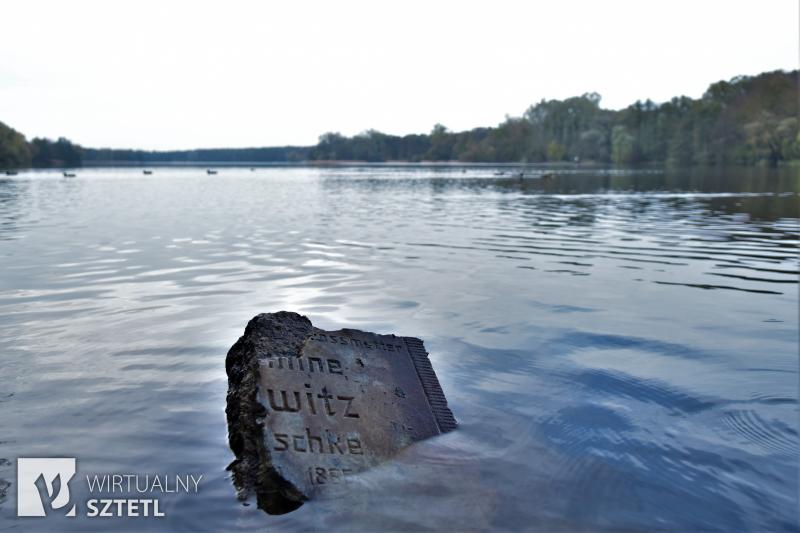 Each year, Lake Rusałka is visited by thousands of Poznań residents – they swim and take advantage of the fried fish and ice creams shops there. Children enjoy the playground, while adults exercise in the outdoor gym. Despite this current, pleasant situation, this Poznań lake hides a tragic past.

The construction of Lake Rusałka (German: Elsensee) began in May 1941 and took sixteen months. At that time, these areas were under German occupation and the city of Posen was to become a model German city. The lake was to be created as the result of damming the Bogdanka River, the plans for the project being already prepared back in November 1939. Both Jews and Poles were forced to do the murderous labour for the creation of this emerging basin.

In order to strengthen the banks, pieces of gravestones, from previously closed cemeteries, were used. Among those was the Jewish Cemetery on ul. Głogowska. In Jewish culture, cemeteries are extremely important places – the deceased lie there, awaiting the coming of the Messiah. It is forbidden to either cremate, move or exhume bodies. The placement of the matzevot is painful from the point of view of Jewish tradition and religion.

In May 2019, the Office of the Monuments Conservator in Poznań received notification about the fragment of a headstone having been found on the bank of Lake Rusałka. From the elements on the fragment, the Conservator determined that it was most probably from a matzevah. Poznań City Councillor Andrzej Rataj (Civic Platform) was the first to call for something to be done. This proved not to be successful due to financial considerations.

When this issue became more widely known, Maciej Krajewski from the Łazęga Poznańska Association and journalist Aleksander Przybylski became involved with the Abisynia Residents Association in the fight to extract the gravestones from the lake. They issued a letter to the Mayor in which they offered significant help – to organise volunteers who would extract, clean and transport the gravestones. Their only condition was that the lake’s water level be lowered by two metres.

Mayor Jacek Jaśkowiak supported their idea, stating that it might not be possible to extract all the gravestones. He stated that

The Mayor also added that the saved tombstones will stand on a memorial site.

Last week, discussions began between the activists and representatives of the City Council. Maciej Krajewski reported on the website of  “Łazęga Poznańska”  that, at the meeting, it was agreed that information boards, telling the history of it creation, will be erected by the lake and that the city authorities will commence preliminary activities with a view to extracting the gravestones lying closest to the banks of the lake. At the same time, work has also begun on the concept, using the matzevot, of some form of memorial.