A Letter from the Liquidated Ghetto 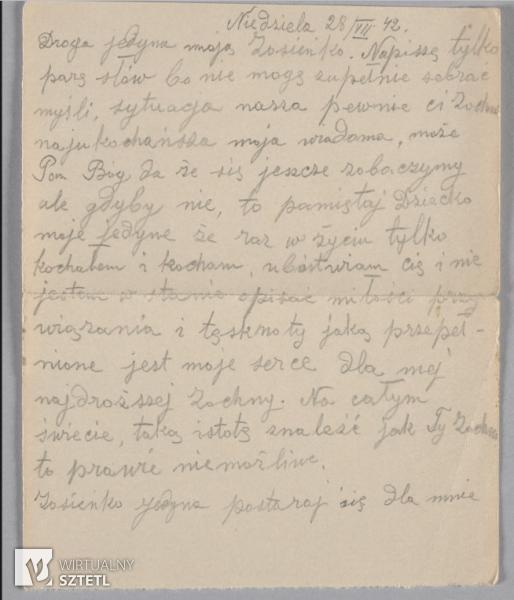 On 22nd July 1942, the Germans began the deportation of Jews from the Warsaw Ghetto to the German Nazi extermination camp Treblinka II. On this occasion, we publish a letter that Witold Hugo Baruch sent to his wife these days.

Witold Hugo Baruch was a violinist. He was born in 1889 and began his musical career before the First World War. He played first violin in the Abraham Izaak Kamiński Jewish theatre orchestra in Warsaw. During the interwar period, he performed, among others, in Kraków as a soloist (he also conducted). He was the concertmaster of the Kraków Symphony Orchestra of the Union of Musicians, which Bolesław Wallek-Walewski founded. Also, in Kraków, he played the first violin in the Jewish Music Society chamber ensemble. Later, he was the first violinist of the Warsaw Philharmonic Orchestra.
After the Germans established the Warsaw Ghetto, he stayed behind its walls. He was a member of the Jewish Symphony Orchestra. His wife, Zofia Dutkiewicz-Baruch, a Pole with no Jewish roots, lived in Grodzisk Mazowiecki. They called each other and sent letters. Six of them have survived, written by Witold Baruch. Five dates from 1941: expressions of tenderness and longing intersect with very prosaic themes - descriptions of difficult everyday life, illnesses, living problems, accounts of friends and commercial themes, because it was evident thanks to trading, among other things, cold cuts and clothing, including smuggling, that the musician tried to survive in the ghetto, apart from occasional musical commissions.
The sixth letter - a dramatic one - comes from July 1942, just after the Germans began the Great Deportation Action from the Warsaw Ghetto to Treblinka:

“Sunday 28th July 42. | Dear Zosieńka, my one and only, I will write only a few words to you because I cannot get my thoughts together. Our situation is probably for you, Zochna, my beloved. Maybe the Lord will see you again but if not, remember my child, the only one that once in my life I only loved and loved. I idolize you, and I cannot describe the love of attachment and longing my heart is filled with for my dearest Zochna. Zochna, it is almost impossible to find a being like you all over the world. | Zosieńka, my only one, try to get more money for me, try to arrive early on Tuesday, maybe we will be able to see where we met last time, at 10 o’clock. Wait until noon. If we fail to meet, go to Stacha and wait for a phone call without packages, at the most some sour candies. As for the money, leave it with the priest at the parish. The deliverer will tell you a lot. Pray for me, and maybe the Lord Jesus will not abandon us. | Yours till the last breath | Witki”.

It is known from the narrative of spoken history, submitted to the Museum of the History of Polish Jews by a relative of Zofia Dutkiewicz-Baruch Maciej Kotański, that the Dutkiewicz family got Witold Baruch out of the ghetto and hid him in Grodzisk Mazowiecki. He died there shortly after the war. The widow died in  1975.
Maciej Kotański forwarded letters to the museum, inspired by the concert Connected by Memory (Polish: Łączy nas pamięć) arranged by the Polin Museum in 2018, which took place on the 75th anniversary of the outbreak of the Warsaw Ghetto Uprising. Part of the concert was the “Ode to Joy” from Ludwig van Beethoven’s Symphony No. 9, chosen because the musicians of the Jewish Symphony Orchestra and the eighty-strong Shir Choir had been secretly preparing for its performance in 1942. The rehearsals were interrupted by the Great Liquidation Action. Almost all the artists perished in the death camp at Treblinka, together with more than 300,000 people from the Warsaw Ghetto.

Other letters by Witold Hugo Baruch can be found at: wmuzeach.pl