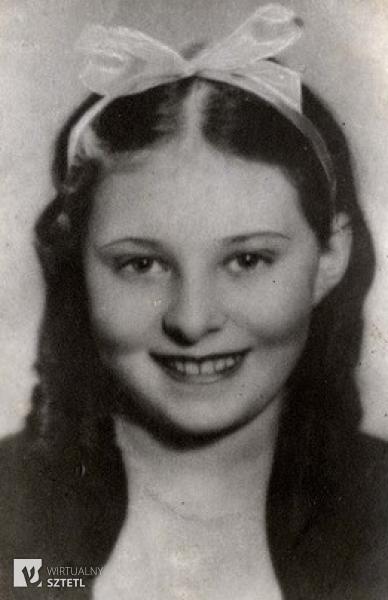 Before World War II, the Feldszuh family had their permanent residence in Czortków. Most likely they would only occasionally visit Warsaw. Rubin was the most frequent guest in the capital; in 1930, he lived at 11 Karmelicka Street, and in 1938, he resided in a flat at 66 Leszno Street. In November 1940, following an ordinance issued by Ludwig Fischer, the governor of the Warsaw District, Josima and her parents were forced to move to the Warsaw Ghetto.

According to the memoirs of Rachela Auerbach, a cousin of Rubin who moved into the Feldszuh family apartment at Leszno Street in the winter of 1940, Josima displayed mastery of the piano despite her young age, playing pieces by renowned composers such as Chopin, Mendelssohn, Tchaikovsky, Mozart, Beethoven or Bach from memory and presenting her own interpretations with ease.

“Perfect pitch, an extraordinary musical memory, an incredible ability to learn, and great technical skill. To top it off, you could see in her the first signs of a rich ‘interior life,’ a certain sensitivity in experiencing the world, a richness of emotion”[1.1].

Josima composed her own pieces, many of which were written down in the notebook preserved in the collection of the Yad Vashem Institute: Lament by the River Bank, The Bird Tells a Story, Bird Feast, Rural Klezmer Musicians, The Melody of a Drop of Water or The Susurrus of the Stream. Rachela Auerbach also remembered Josima writing several mazurkas, a kujawiak, a waltz, and five melodies inspired by Sabbath songs.

Her talent was quickly noticed by musicians living inside the ghetto:

“One time a certain Mrs Rabinowicz – a singer who had come to visit us – took our little Josima with her to ‘Salon’ at Ogrodowa Street, a place where Jewish singers and musicians would gather and spend several hours surrounded by music every Thursday. While there, my daughter listened to one pianist’s performance and criticised him severely, much to the surprise of the audience. When the pianist found out about it, he shouted and laughed arrogantly: ‘If you’re so smart, then play that better yourself, missy!’ Josima sat at the piano and thus her fate was sealed. All talk ceased, everyone went quiet and stopped moving around, silence filled all the rooms of ‘Salon’. Everyone present gathered around the piano, their eyes wide open and mouths agape in immeasurable disbelief. When she stopped playing one piece, they made her continue. Mrs Rabinowicz then accompanied her home. She said that ‘Salon’ had unanimously decided that ‘the world’ had to hear my daughter play and that several pianists had offered to give her lessons for free,” wrote Rubin Feldszuh in his diary[1.2].

From that moment on, Josima was tutored by some of the best Jewish musicians, including Hanna Diksztajn (Dickstein). At the same time, she was preparing for her first concert, which would be remembered as one of the most moving events in the cultural life of the closed ghetto. It was decided that she would perform Piano Concerto No. 9 by Wolfgang Amadeus Mozart in the “Melody Palace” auditorium at 12 Rymarska Street. One rehearsal was enough for the girl’s abilities to be acknowledged by the ensemble – 45 experienced artists who before the war had formed part of the orchestra of the Warsaw Philharmonic, the Warsaw Opera, or the Polish National Radio Orchestra. Among them were such prominent figures as Ludwik Holcman, Marian Neuteich, and Adam Furmański.

And so on a rainy Saturday, 15 March 1941, a sensational event was set to take place – Josima, merely eleven years old at the time, would play as a soloist alongside the best musicians of the Jewish Symphony Orchestra! The concert attracted crowds of people; the audience impatiently awaited the appearance of the ‘wonder child.’ In the first part of the performance, the ensemble played Mozart’s Marriage of Figaro and Symphony in G minor and the Unfinished Symphony by Franz Schubert. After that, Josima stepped on the stage and played Mozart’s Piano Concerto No. 9.

“… she knew the concerto with such precision and so perfectly that nothing could compare. Every sound was in her blood, as if she’d already played it during the creation of the universe”[1.1.2].

The delighted audience rewarded her with rapturous applause. As an encore, Josima played two pieces that she had composed herself. Rubin Feldszuh recalled the day as a moment when the entire family was momentarily able to forget about the war, the ghetto, and their tragic financial situation; a party was held for the teenage pianist, her teachers, friends and family. There was no end to congratulations, gifts, and excitement.

“When we asked her what she wished for, she ‘modestly’ said that she only had two goals: to be the best pianist in the world – not only among women, but also among men – and secondly, and more importantly, to create great works as one of the greatest composers in history”[1.1.2].

Right before the beginning of the Grossaktion, the Feldszuh family received a proposal to get the girl outside the ghetto. However, they declined out of fear of separation. On 22 July 1942, Germans started deporting Jews to the Treblinka extermination camp. The family stayed in hiding inside the ghetto until January 1943, when all three managed to escape to the so-called Aryan side with the help of runner Emilka ‘Marylka’ Rozencwajg (Szoszana Kassower) and found shelter in the village of Pustelnik near Marki. Back in the ghetto, Josima had contracted pneumonia, which in the months that followed was diagnosed as an advanced stage of tuberculosis. Until the very end, the girl’s relatives believed that she would make it through. Auerbach wrote about the final weeks of the pianist’s life as follows:

“I was one of those Jewish ‘Aryans’ who were able to roam around the city. It so happened that I went to get information about Josima’s health. By then, I had already managed to establish some contacts on the Polish side. I thought it might still be possible to place Josima in a tuberculosis sanatorium. I wanted to devote all my energy to that task, I said I’d do everything I could to save her!

On Saturday, 17 April [1943], on the evening of Passover and Easter, the evening the ghetto uprising began, I went to a doctor specialising in lung diseases, who examined Josima and who also happened to be the head of a sanatorium for lung diseases in Otwock. Her verdict was short and clear: ‘There’s nothing left to save. Josima’s lungs are like a sieve. Her days are numbered. She may survive a week or even less than that…’

(…) Josima died on Wednesday, 21 April, on the second day of Passover, the third day of the uprising. In a city filled with smoke rising from the burning ghetto, rocked by the booms of explosions, trembling from gunshots, I received the news of her passing. Josima had died in a tiny village named Pustelnik – for me, her death was the death of a dear and admired person whose life, in a way, had already been terminated back there, behind the walls drowning in bloody mist”[1.1.1].

Perła committed suicide soon after her daughter’s death. The bodies of both women were exhumed from their temporary grave and reburied by Rubin, most likely in the Jewish Cemetery at Okopowa Street in Warsaw.

In 1945, Rubin Feldszuh left for Palestine. He started a new family under the name of Ben Shem. He died in 1980.