On July 22, 1942, Germans began the deportation of Jews from the Warsaw ghetto to the German Nazi death camp Treblinka II. 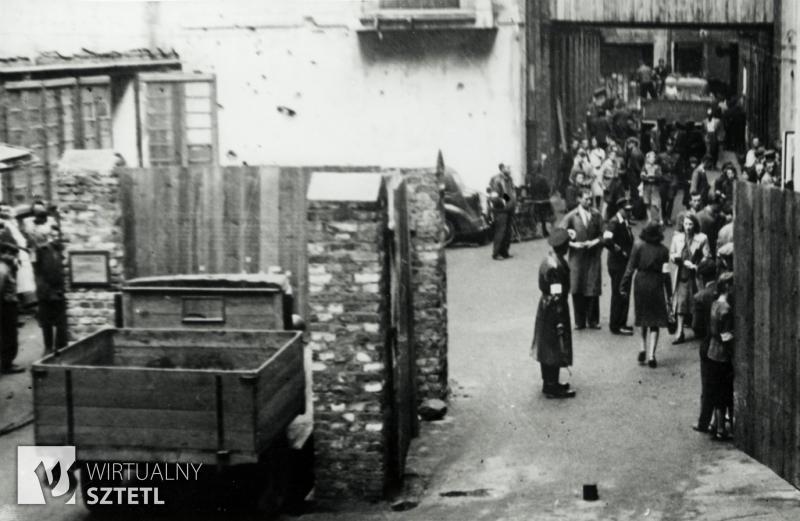 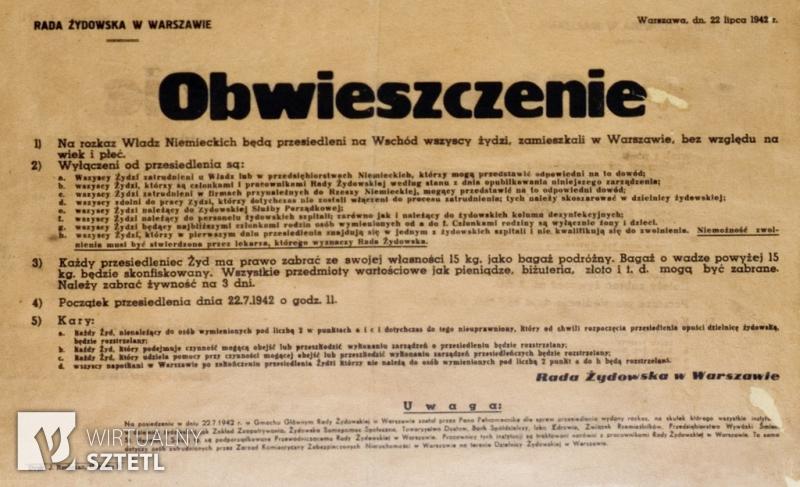 In the period of several months, until the autumn of 1943 – the end of Treblinka II – Jews, who lived mainly in the areas that were then parts of the General Government were killed in the genocidal Reinhardt Action – "the final solution to the Jewish question" (in German: "Endlösung der Judenfrage").

The Great Action of deportation of the Ghetto began on July 22, 1942, on the eve of the ninth day of the Jewish month of Av. During the day, announcements appeared on walls, informing about the "relocation of the Warsaw ghetto population to the East". The announcements were not affirmed by Adam Czerniaków, chairman of the Jewish Council (Judenrat), but by the Jewish Council as such. The content of the announcement came into force immediately. Its contents camouflaged the true meaning of the word "resettlement" (in German: Aussiedlung). Already the day before, the Gestapo arrested about 60 hostages: members of the Judenrat, representatives of the intelligentsia, and imprisoned them in Pawiak. In the event of failure of the Action, they would have to bear the consequences and be executed. Commander-in-Chief of the Action was SS-Sturmbannführer Hermann Höfle. Helpers on its implementation were: SS-men, Gestapo, and also Latvians, Ukrainians, Lithuanians, and the so-called "wahmen". The course and pace of the Action was decided by SS-Untersturmführer Karl Brandt and SS-Oberscharführer Gerhard Mende – the employees of the IVB section of the Security Police Office and Security Service.

On the night of 21 to 22 July, the walls of the ghetto were all guarded so that it was impossible to get out alive.

"22 July 42 – Morning at 7:30 in the municipality. The boundaries of a small ghetto are surrounded by a special formation apart for normal. At 10 o'clock, Sturmbanführer [Hermann] Hoefle arrived with his companions. We switched off the phones. Children were taken away from the opposite garden. We were told that, with some exceptions, Jews, without gender or age differences, would be displaced to the east. Today, by 4 pm, 6000 people are to be delivered. And (at least that many) will be every day"[1.2]

The announcement contained a second point informing about who will not be relocated:

"[…] a. All Jews who can provide adequate evidence of being employed by the authorities or in German enterprises,

b. All Jews who are members and employees of the Jewish Council, as of the date of publication of this ordinance,

c. All Jews employed in companies belonging to the German Reich, able to provide appropriate evidence,

d. All able-bodied Jews who have not yet been included in the employment process; these should be barracked in the Jewish quarter,

e. All Jews belonging to the Jewish Order Service,

f. All Jews belonging to the staff of Jewish hospitals, as well as those in the Jewish disinfection units,

h. All Jews who on the first day of resettlement are in one of the Jewish hospitals and are not eligible for discharge. The inability to be discharged must be confirmed by a doctor to be appointed by the Jewish Council."

The content of the announcement made most of the ghetto inhabitants not quite aware of what the text actually meant, so they started to seek employment in workshops, which was to ensure that they would remain in the ghetto. Those who failed to receive a proper stamp were taken from their houses surrounded by German troops with the help of the Jewish Order Service (the so-called Jewish police). The tenement dwellers were gathered in the courtyards, where a cursory selection took place, and from there, in formed columns, they were rushed to the Umschlagplatz – transshipment site at Stawki Street. There, they had to wait for several hours, and even up to a few days until a sufficient number of people were gathered to fill the transport to Treblinka II. All this was done in inhumane conditions, with the enormous brutality of the guards, high temperature, no water and no food.

The situation in the ghetto is depicted in Nieznane Zapiski (Unknown Jottings) by Marek Edelman:

"July 1942. Damned heat. Some strange things are happening in the ghetto. It is hard to talk with people. Crazy nervousness. Something will happen, "something, something," but what? Thousands of people ask the same question. People are lost in guessing, they do not sleep at night. Who knows why and for what reason they sign up to German shacks. They give away their machines, liquidate their businesses. Something will happen, something terrible, but what?"[1.3]

On the first day of the Action, Germans loaded the Jews who stayed in refugee camps, some prisoners from Gęsiówka, and beggars. On 23 July, a transport of 6250 people arrived in Treblinka II.