Redakcja Wirtualnego Sztetla
Yom Kippur, the most important day on the Jewish calendar, is the culmination of a 10-day period of penance called Yamim Noraim. Celebrated on 10th of Tishrei, Yom Kippur is preceded by the ceremony of kapparot, which is a ritual washing in a mikvah. On the Day of Atonement Jewish law requires a strict fast. Cleaning and washing is prohibited as well as using cosmetics or wearing leather shoes. Sexual intercourse is also prohibited. On this day, one must forget about their flesh and temporal affairs, devoting their focus to spirituals matters. 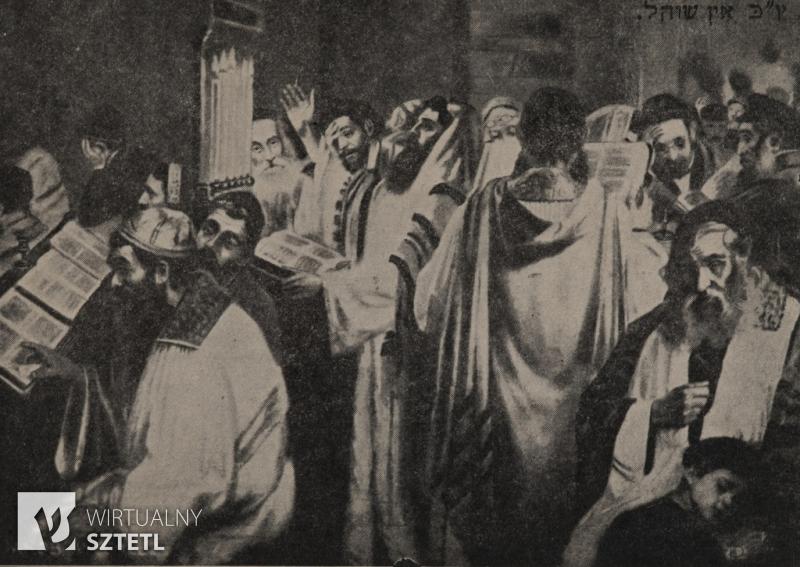 On the day preceding Yom Kippur, afternoon prayer in the synagogue includes a public confession of sins called ‘vidui’, which is also an important element of prayers during the Day of Atonement. The table prepared for the meal is covered, just as on the Day of Sabbath, and there are Sabbath candles upon it. The special candle, large enough to last till the end of Yom Kippur, burns as well. As on every Sabbath, a mother blesses the light that is the Light of Reconciliation, and spreads it around the house so that the light reaches every corner.

Before sunset on Yom Kippur eve, worshippers gather in the synagogue. The liturgy starts. Men wear tallit (prayer shawls) in black or blue stripes. A cantor comes to the desktop, which is before the Ark. Two other cantors are close to him. Together they announce that the Day of Atonement commences and all people can come to the Lord with their prayers. The cantors recite a special formula three times. Then, the main cantor recites the Kol Nidre prayer:

The last sentence is said by all believers. Later, the cantor blesses the people and preaches the sermon. The evening of Kol Nidre ends in front of the opened Ark with a common singing of the songs Yigdal, which includes 13 Articles of Faith. They also sing the song, ‘Adon Olam’ - Eternal Lord - which ends with these words:

"Into His hand I commit my spirit when I sleep, and I wake, and with my spirit, my body, The Lord is with me, I will not fear”.