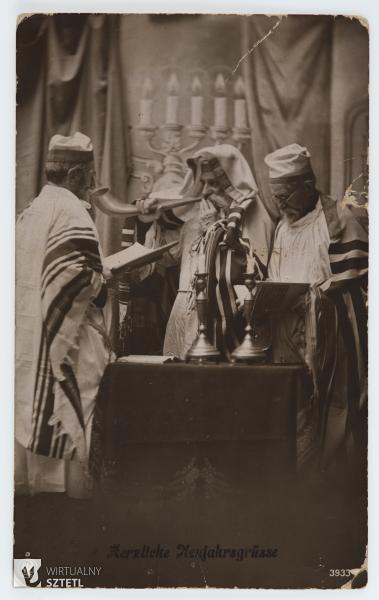 Le-shana tova tikhtevu! May you be inscribed for a good year!

– goes the greeting exchanged by Jews all over the world on the occasion of the Rosh Hashanah holiday, the Jewish New Year which is about to begin.

Rosh Hashanah (Hebr. the head of the year), one of the most important holidays in the Jewish calendar, falls on the 1st and 2nd day of the Hebrew month Tishri. According to tradition, it commemorates the creation of the world and the mankind.

The New Year’s arrival is announced by blowing a shofar, a simple wind instrument made of ram’s horn. This ritual dates back to the biblical times – in the Book of Numbers, the first day of Tishri was referred to as Yom Teru’ah (Hebr. the day of blowing [the horn]; Num. 29:1). Jews were obliged to “have a sabbath, a memorial of blowing of trumpets, an holy convocation” (Lev. 23:24)[1.1].

On the first day, in the afternoon, a ritual of tashlikh, i.e.”casting off” the sins, is performed by a natural body of flowing water. The penitent Jews wander around reciting a passage from the Book of Micah (7:18-20): “thou wilt cast all their sins into the depths of the sea.” In the evening, after the synagogue service during which a holiday blessing is recited, people return to their homes. There, during the festive meal, they consume apples dipped in honey (which is supposed to ensure a happy and sweet New Year), a round challah symbolizing the yearly cycle, gefilte fish, pomegranates and dates.

Rosh Hashanah commences a ten-day period of repentance which ends on Yom Kippur, the Day of Atonement. During this period, referred to as Yamim Nora’im (Hebr. the days of awe), Jews are supposed to ponder on their sins and ask for forgiveness from anybody they have wronged.

The entire week preceding the New Year is spent on preparations to the Days of Awe. Jews are obliged to fast  and to recite daily penitential prayers called Slichot, which contain the following refrain: “Forgive us, Our Father, for we have sinned.” According to tradition, on the first day of Slichot, people visit cemeteries and keep vigil there while reciting prayers. The same ritual is repeated on the day preceding the New Year’s day and Yom Kippur.