The Last Bookseller of the Israeli Republic of Poland

Yaron Karol Becker
They say that there are no people that cannot be replaced. I am not sure I agree with this. There is something particularly painful in the passing of Edmund Neustein, the ‘boss’ (he liked it when people addressed him that way) of a Polish bookstore in Tel Aviv. He was also an antiquarian. Or simply Mundek, a lover of Polish books, Mundek the bibliophile, he was the stronghold of Polish culture in Israel. A man passed away and took the whole epoch with him, creating a gap that cannot be refilled because the times now are different… How to create a unique portrayal out of slivers of memory? This is why I would like to write about what I think is most important here. 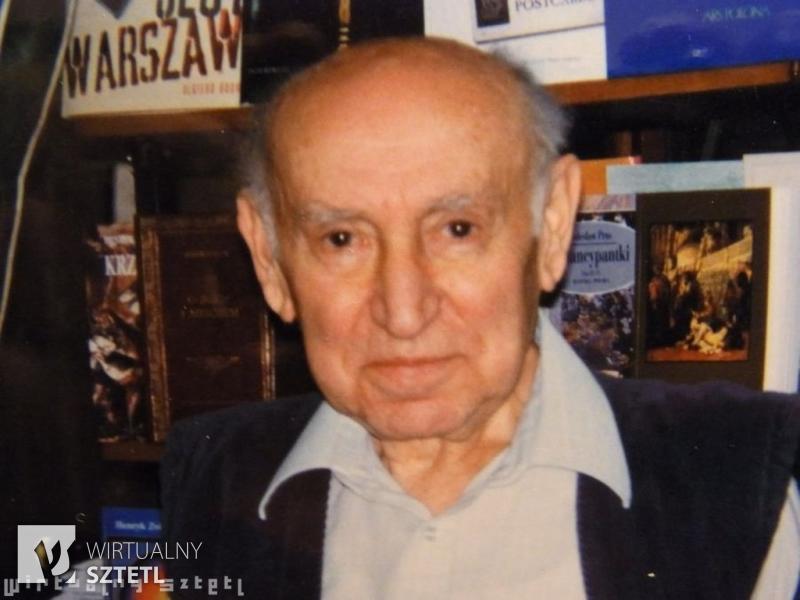 The mere fact that Neustein, together with his wife Ada, created a genuine oasis of Polish culture in Israel is of great significance. In the opening decade of Israel’s existence, there were other Polish culture havens: libraries, bookstores, all of which faded quickly – yet one Polish bookstore which opened in 1958 in Tel Aviv at the shopping arcade at 94 Allenby St. flourished and turned into a literary salon and the center of Polishness in this country. On Fridays, at the peak time before two o’clock, the salon became overcrowded, bustling and cozy. This area of the shopping arcade turned into a small assembly where an event, such as the release of a new book, was celebrated and put under discussion, oftentimes turning into a dispute, being so characteristic of Polish Jews. The boss would confess to me that the truth was that he lost money on this book business, which he had to supplement with income from Polish press sales and the antiquarian bookstore, which became the biggest Polish second-hand bookstore outside Poland, at least in that the orders would come from all over the world.

How to explain this extraordinary yet optimistic cultural phenomenon, especially if one takes into account the atmosphere of those times, which was the period of Sturm und Drang of Hebrew culture, with hundreds of thousands of emigrants from seventy countries ‘chewing over’ the text- book of ‘one thousand words’ to learn the initial letter of the Hebrew alphabet. On the surface, the Neusteins appeared to be going against the historical mainstream at that time. The vast majority of the Polish aliyah (emigration) of the 1950s, formed most notably by polonized Jews, could not go on without Polish press or books. At this point it is worth highlighting that Neustein would satisfy the fundamental human need: hunger for culture and books.

Yet, there was a sizeable group of those with command of foreign languages, such as Yiddish, Russian or German, among Polish emigrants. So from where did such a strong attachment to Polishness spring? Well, first and foremost, a universal principal saying that you cannot teach an old dog new tricks, played a key role here. That was the first reason . Secondly, they did not want to abandon Polish since for many the Polish language had been the first window on the world, the first means of social advancement, something they had pampered all their lives. To cut a long story short, the language was their own personal achievement. Such was Mundek, a Jewish boy from Drohobycz, a pupil who had attended drawing classes run by Bruno Szulc, and the Red Army soldier gravely wounded at the battle of Stalingrad, offering armed resistance to Nazism, and subsequently, spearheading the formation of the publisher’s and bookseller’s movement in postwar Poland. Nurturing his deep love for Polish books, he opened another bookstore, this time in Tel Aviv, where he did not abandon his life-long mission of promotion of Polish culture, which was the culture he was always proud of. However, it does not mean that he was one of those “Jewish noblemen” boasting of no longer understanding the Jewish language. Not at all. Being a lover of Polish literature, he did not distance himself from his Jewish roots so you could talk to him in juicy Yiddish and hear an intelligent witz taken from Jewish, such as this perennial maxim that I quote whenever I can: ‘Jews are like everyone else but … more,” which must have been one of his Jewish jokes. All this made him a unique figure.

There is another aspect of the closedown of the bookstore, which has to do with the continuity of Polish culture in Israel. In most cases, our children do not speak Polish anymore. However, a trace of Polish culture is noticeable in the second and third generations in exclusive cultural circles in Israel, where there is still some room for esteem for Polish poetry. For instance, the works of Wisława Szymobrka, so zealously discredited by the ‘Radio Maryja’ Polish radio, were published here eight times. Also Czesław Miłosz is recognized here, and so is Zbigniew Herbert. Polish theater, cinema, graphics and plastic art are highly valued. This is due to intermingling of cultures that takes place in Israel. Young readers of books from Neustein’s bookstore, having been raised in the atmosphere of Polish culture and having concurrently evolved in the heart of Hebrew culture, such as Jurek Bronowski, who died young, and others, became promoters of Polish culture, which they instilled in local culture, and thereby prepared the background, the base, for another contemporary meeting of the youngest Polish-Jewish generations who ‘did not know Joseph.’ By the way, Neustein ran the only commercial company which, at that time of non-existent diplomatic relations between Poland and Israel, had unhindered access to Warsaw. It is worth highlighting that he showed great courage when he welcomed and hosted the Polish opposition in his bookstore, among whom were Jacek Kuroń, Adam Michnik and others together with the writers of the so-called Polish second circulation. The bookstore of Ada and Mundek offered all resistance literature books published in the West. Already when the transformation in Poland was over, a marvelous meeting with the writer Jacek Kuroń was organized at the bookstore of the Neusteins in 1996, when hundreds of readers and fans crowded along the shopping arcade to wait for Jacek, heartily welcomed and popular here, to sign his books for them.

I can hardly look at the desolate, abandoned space by the closed doors to the bookstore of Ada and Mundek, where for forty years I used to rush in frantic haste to arrive there before the closing time, just before 1 pm . I force myself to read Adam Asnyk, who was one of Neustein’s favorites, and tell myself with artificial pathos that ‘you have to catch up with the living.’ On the other hand, I cheerlessly repeat the words of Ela Sidi, a former worker of the bookstore, who, on her blog entitled ‘Gojka z Izraela’ [A non-Jewess from Israel], in few words described the essence of the figure of Edmund Neustein: The Last Bookseller of the Israeli Republic of Poland.