Eli Rabinowitz talks about his family from Orla 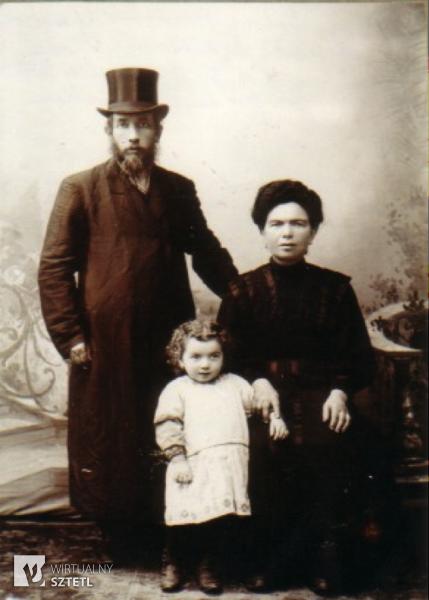 My name is Eli Rabinowitz. I live in Perth, Australia.  My three siblings live in New York, Israel and South Africa. I am married to Jill Reitstein (originally Rotzstejn, from Nasielsk). Our sons are Dean, married to Tami (grandparents from Bialystok), living in Sydney, and Neil, married to Jo, living in New York. We have, therefore, strong ties to Poland.

I was born in Cape Town, South Africa in 1952. My father was the first of his siblings to be born in South Africa. His brothers and mother were born in Palestine. His father was from Orla, Poland (or Russia as it was known then), his maternal grandfather from Lithuania. My mother was born in Latvia.

My journey to Poland began with a simple short message on JewishGen and a unexpected response to it by a non-Jewish Polish researcher, Wojciech Konunczuk.

My family connections with Poland stretch back to the 1500s to my 12thgrandfather, Shaul Wahl Katzenellenbogen,  “The King of Poland for a Day”.

Saul Wahl (c. 1542—1622) was a wealthy and politically influential Polish Jew. According to legend, he was king of Poland for a single day August 18, 1587. Wahl had numerous children, including the renowned Polish rabbi, Meir Wahl.

King of Poland for a day

The fact that Saul was king of Poland is not well-supported by historical data, but it gained a firm place in the folk beliefs of the Jewish people.

And from Jewish Encyclopedia:

The version set forth in the Jewish Encyclopedia is as follows:

„At a point in his life, Lithuanian Noble Mikołaj Krzysztof "the Orphan" Radziwiłł (1549–1616) wanted to repent for the numerous sins he committed when he was younger. He commenced a pilgrimage to Rome in order to consult the pope as to the best means for the propitiation of his misdeeds. The pope advised him to dismiss all his servants and to live for a few years as a wandering beggar. When the prescribed period ended, Radziwill was penniless in the city of Padua, Italy. He pleaded for help, but his claims of being a noble fell on deaf ears. Radziwiłł decided to appeal to Samuel Judah Katzenellenbogen, the rabbi of Padua. Katzenellenbogen treated him nicely and provided him with means to return to Lithuania. To repay the favor, Katzenellenbogen requested that Radziwiłł find his son Saul, who years before had left to study in a yeshiva in Poland. When he visited Poland, he checked yeshivas until he found Saul in Brest-Litovsk (now Brest, Belarus). Upon meeting and getting to know Saul, Radziwiłł was very impressed with his intellect and offered to provide Saul for boarding in his own castle where Saul can pursue his studies. Radziwill's court personnel were similarly impressed with Saul, and his reputation spread throughout Poland. Stephen Báthory, who was King of Poland died in 1586, and the Poles were split between being ruled by the Zamoyski familyand the Zborowskis. Under Polish law at that time, if electors could not agree upon a king, an outsider should be appointed "rex pro tempore" (temporary king). Radziwill proposed that Saul Wahl be appointed the temporary king and Wahl was elected to this high office to shout of "Long live King Saul!" The length of his reign range from one night to a few days. During the short reign, Wahl passed numerous laws, including laws that eased the conditions for Polish Jews. The name "Wahl" was given him from the German word Wahl (meaning "election")”[1.1].

However, it was my grandfather, Nachum Mendel Rabinowitz, who was born in Orla, Grodno Gubernia near Bialystok on 2 Elul 5647 (22 August 1887), who brought me on this journey back to Poland.

In November 2011, I received an email from Wojciech Konończuk, who wrote me the following:

I research the history of Jews in Orla, preparing a book on this subject, and I'm very interested in any testimonies, photos or other materials concerning this issue. Maybe you will be able to provide me some new information about Jewish people from Orla?

Research over the next six months was based on our existing family records and not much in terms of new genealogical ones was found. The records for Orla for the period around the turn of the 20thCentury are housed in the Grodno State Archives in Belarus. We eventually found out that the 1906 Bielsk County Voters List including "Skorishevski Abram-Yankel son of Leib", who is also listed in the 1912 Grodno Gubernia Voters List.  I also found family records and memoirs of my surviving aunt, Sarah Stepansky.

As a result, I have reconstructed all descendants of Chart of Moshko Skareshevsky of Orla.

After six months of correspondence and research, I met Wojciech on 12 May 2011 in Bialystok. He drove me to the Orla Synagogue, where I met the other members of his team:

The Amazing Story of Uncle Moshe and Paula Lichtzier

My great uncle Moshe Rabinowitz, after whom I am named, was born in Orla and in 1922 moves to South Africa. Paula Lichtzier and her family live in Orla. Moshe proposes to Paula and arranges to bring her out to South Africa in 1928. Moshe is killed in a motor accident six weeks before they are to be married. Paula later marries Joseph Pinn, but Paula remains close to the Rabinowitz family, until she passes away in 1976.

Another researcher sends Polish researcher Wojciech a photo of the Orla Yiddisher Folk School (originally from a family member of Paula's).  Wojciech recognises this photo as he has already received a similar one from me.  He puts the two in touch and soon I am in turn connected with Paula's daughter.

Soon I am put in touch with Paula’s daughter, Ray Hengy, who lives in Freiburg-im-breisgau in Germany.

More details of the families emerge through two memoirs written, one of which was written by Sylvia Kaspin, niece of Paula Lichtzier (Sylvia from Orla, was the cousin of Ray Hengy), while the second one was authored by Sarah Stepansky, niece of Moshe Rabinowitz and aunt of Eli Rabinowitz. Just completed in November 2011.

Eighty years after Moshe is tragically killed and 35 years after Paula passes away, the two families are reunited through the amazing and fortuitous exchange of photos taken so many years ago in Orla!

Ray still has the engagement ring that Moshe bought Paula for their ill fated marriage.

She is wearing the engagement ring that her mother Paula was given by my great uncle Moshe. Ray, her husband Heinrich, my wife Jill, Wojciech and I visit Treblinka on our way to Orla.

We arrive in Orla (see the picture of the sign, which is in Polish and Belarusian), reflecting the mixed history of the area. In our families’ time, it was part of Russia.

On Sunday 27 May in London, I meet Paula's relative. She shows me the photo that she had emailed to Wojciech. This photo, together with the one given to me by my aunt in Jerusalem, resulted in our families (who are not related) reconnecting in such a remarkable way.

So by Ray and I meeting in Orla, where it all began nearly 100 years ago, descendants from opposite ends of the world create a happy ending to an ill fated romance.

Click here to view the map of Orla descendants compiled by Eli Rabinowitz.