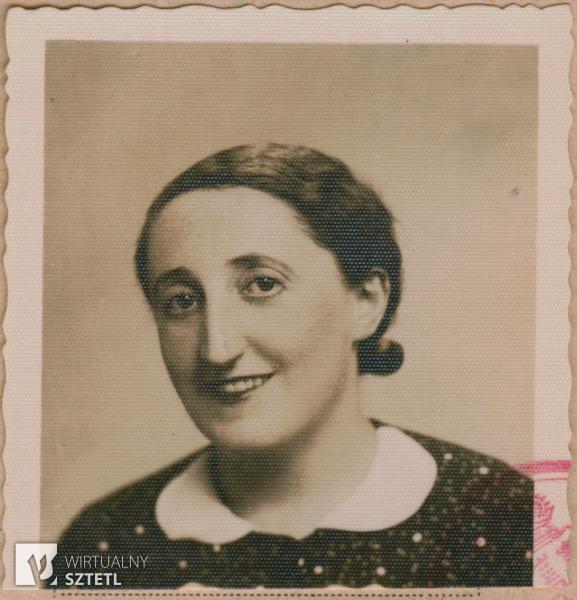 Diana Reiter was born into a wealthy assimilated Jewish family, the youngest of four daughters of Abraham (Adolf) Reiter – a respected lawyer, distinguished company commander of the 77th Infantry Regiment of the Austro-Hungarian Army, and long-standing vice-mayor of Drohobych – and Sophie (née Heimberg), co-owner of "Dr. E. Reiter, Hammerschmidt, Heimberg i S-ka,” a family-run paraffin and paraffin candle factory. Diana's sister, Bronisława Reiter-Silberschlagowa (a graduate of the Jagiellonian University) was a lawyer; she worked in the Tax Chamber in Warsaw and Kraków.

In 1927, Diana Reiter graduated from the Faculty of Architecture at the Technical University of Lviv (only 15 women graduated from the same faculty between 1919 and 1930). She then moved to Kraków. In April 1928, she started work at the Construction Office of the District Directorate of Public Works at the Provincial Office (Polish: Dyrekcja Okręgowa Robót Publicznych przy Urzędzie Wojewódzkim). She was the only female employee with a technical degree. This was an undisputed success which testified to her talent and determination, even more so considering that people of Jewish origin generally struggled to find employment in the public sector under the Second Polish Republic. As a clerk she issued opinions on building projects and handled private persons’ appeals against decisions of the construction authorities of the City of Kraków.

The young architect’s first project was a plan for the reconstruction of the Krzysztofory Palace, the erstwhile seat of the Directorate of Public Works, co-created with Adam Moscheni and Zdzisław Kowalski (head of the Construction Office). Working with the same team, Reiter also created a design for the new building of the Jagiellonian Library at A. Mickiewicza Avenue and submitted it to one of the “most serious and fascinating architectural competitions of reborn Poland,” as it was described by the Architekt magazine. Reiter’s designer team took third place and won a prize of 5,000 zlotys. Their submission was thus described in the report of the competition committee:

“Good location. Timely execution of the building is possible, expansion can be carried out without detriment to the overall plan. Good layout of the storehouse and main reading room. The main reading room is passable, it has unpleasant lighting (overhead lights in the centre, wall lights in the wings). Easy control of movement, except in the section holding engravings and incunabula cabinets, which is communicated with the studios via a corridor, resulting in intersecting book traffic and reader traffic. The positioning of the administrative rooms is good, the positioning of the rooms intercut with entrances and the wardrobe is not developed enough. Compact, economical building. Good architecture in terms of shapes."[1.1]

In 1931, Diana Reiter was dismissed from the Construction Office (redundancy of employees without permanent contracts due to the economic crisis) and later assigned to the Construction Division. In 1932, she received a professional construction licence which allowed her to work independently as an architect.

In the years 1931–1934, she was a member of the Union of Architects in Krakowskie Province. The head of the association was Adolf Szyszko-Bohusz, and his deputy – engineer Kazimierz Kulczyński, Reiter’s colleague from the District Directorate of Public Works and her future employer. She probably began working in Kulczyński’s studio in 1933 or 1934. However, according to her Kennkarte application from February 1941, she worked there since 1940 and earned a monthly salary of 250 zlotys. Regardless of the exact date of employment, it is certain that she was the only Jewish woman in the 45-strong team of architects.

In 1936, Diana Reiter joined the newly formed Union of Jewish Engineers, which had as its main objective the struggle for the right to work for Jewish engineers, professional counselling, vocational training, publishing specialist magazines and books, and organisation of exhibitions.[1.2] She sat on the organising committee together with other well-known architects from Kraków – Alfred Düntuch, Saul Wexner, and Isser Harband. Again, she was one of the few women among the association’s 195 members (as of 1938).

In the years 1933–1939, Reiter independently designed two residential buildings in a functionalist Bauhaus style, both preserved to the present day: the tenement house at 26 Beliny-Prażmowskiego Avenue (1933–1935) and the four-storey tenement house with elements inspired by naval architecture at 16 Pawlikowskiego Street, commissioned by Józef and Eleonora Elsner (1937–1939).[1.3] In 1938, she designed a building at 19 Lea Street, but the project was never implemented.

In 1942, Diana Reiter was deported to the ghetto created by the Germans in Kraków’s Podgórze district. She first lived at Lwowska Street, and then moved to flat no. 6 at 19 Limanowskiego Street on 19 June 1942.[1.4]

Following the liquidation of the ghetto in February 1943, she was deported to the Nazi German labour camp in Kraków-Płaszów. She worked on the construction of the Wachkaserne – barracks for German camp guards. When the wall of one of the barracks collapsed, she was battered and shot by Oberscharführer Albert Hujar.

Joseph Bau, who witnessed the death of Diana Reiter, described the murder as follows:

“SS Officer Hujar, who was the supervisor of the construction, put the blame for the collapse on engineer Diana Reiter... and began to whip her. Reiterówna was a small, thin woman – she fainted after the first blows, but the SS-man continued to hit her […]. Finally, he fired a series of bullets into the pile of bones, rags, and blood, as if to make sure that engineer Diana Reiter would not get up again.”[1.5]

Diana Reiter has been immortalised in literature and film, for example in Thomas Keneally's novel Schindler's Ark and in Steven Spielberg's 1993 film Schindler's List.