The Kalisz Privilege of 1264 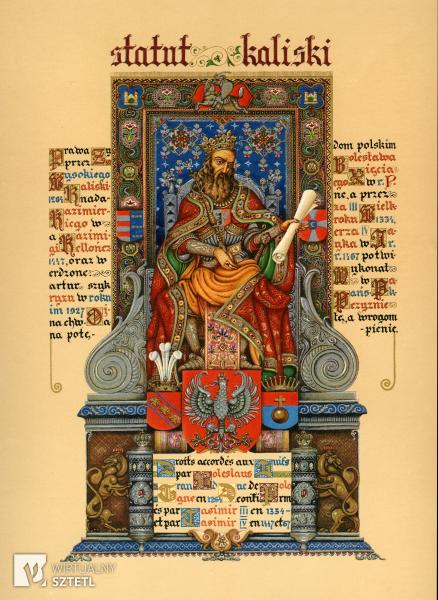 The Kalisz Privilege of 1264 was a privilege for Jews issued on 16 August 1264 in Kalisz by the Kalisz Prince Bolesław the Pious. Based on Bohemian and Austrian models, it took the Jews under the ducal protection, subjected their cases exclusively to the jurisdiction of the ruler and the voivode, granted facilitations in trade and credit activities, and respected their distinctive customs. The Kalisz privilege was a model for similar solutions in many Silesian principalities. In 1334 it was approved by Casimir III the Great and extended to the whole Kingdom, and Lithuanian Duke Vytautas modelled his privilege for Lithuanian Jews on it (1388) - in this way, the Kalisz privilege was the basis for legislation on Jewish matters until the end of the First Polish Republic (Polish-Lithuanian Commonwealth).

We, Bolesław, Duke of Greater Poland by Divine Grace, inform both the contemporary and posterity, to whose knowledge this letter will reach, that we have decided to present to our Jews living in the whole territory of our country the laws and privileges they have received from us, as it is included in the following list: