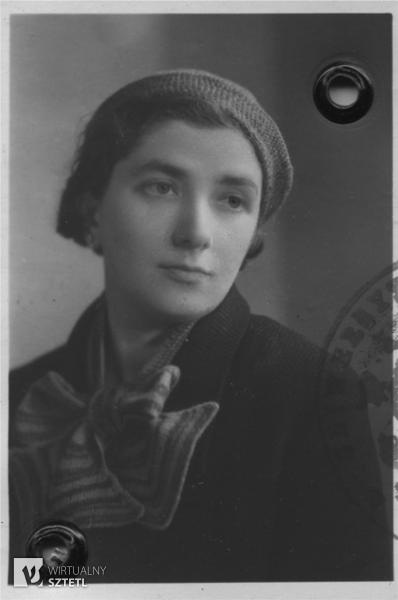 Auerbach (Auerbakh) Rachel (Rokhl), Rachel(a) Eiga Auerbach (8 December 1899, Lanivtsi near Borshchiv – 31 May 1976, Tel Aviv) – writer and poet writing in Yiddish, Polish, and Hebrew, translator, literary critic. She was a representative of the Polish-Jewish literature of the interwar period, one of the leading collectors of Holocaust testimonies, and a prominent researcher of the Warsaw Ghetto.

She was born in Lanivtsi near Borshchiv in the Austrian Podolia region as the daughter of Chanina Auerbach and Menie née Kimelman. She had two brothers who died prematurely: David Salomon (1888–1889) and Asher Zelig (1892–1935); her parents passed away before 1939. She hailed from the rural Jewish milieu specific to Galicia – as opposed to other regions of Poland, Jews in the eastern part of the Austrian Partition resided not only in small town and cities, but also in villages and rural communities, which found its reflection in the 1921 census. Rachel had an extensive family living in many Galician localities, including Lanivtsi, Ozeryany, Borshchiv, Tlumach, Chortkiv, and Kryvche; almost all of its members died in the Holocaust.

Until ca. 1913, Rachel attended primary school in Lanivtsi (or Borshchiv?). Following the outbreak of World War I, she was forced to continue her education at home. She only returned to school in 1920, when her family moved to Lviv and she enrolled in the last year of the Adam Mickiewicz Private Female Secondary School. She passed her exit examination on 6 June 1921. The same year, she enrolled in the Jan Kazimierz University to study philosophy, psychology, and history; one of her tutors was Professor Kazimierz Twardowski. She was one of the leaders of the Association of Jewish Students at the Jan Kazimierz University. She completed her studies in 1926 but did not obtain her degree, as she decided to look for employment before sitting her final exams. She even wrote a thesis on psychognostics but never defended it. She did, however, obtain teaching qualification allowing her to teach history and propaedeutics of philosophy in secondary schools. Nonetheless, many of her biographers have described her as a graduate of the Faculty of Philosophy at the Jan Kazimierz University and even argued that she had a doctorate in psychology. These claims disregard the fact that in the years 1933–1934 she tried to complete her degree in psychology at the University of Warsaw. She attended classes by such prominent professors as Marceli Handelsman or Władysław Witwicki, but she eventually dropped out once again, probably for financial reasons.

She made her literary debut in 1925, with her poems in Polish published in the Lviv-based Chwila daily. Nonetheless, she never felt much affinity to the Polish-Jewish milieu and leaned strongly towards Yiddish culture. She worked as a journalist in Nayer Morgen and other Yiddish periodicals. In the years 1927–1931, she was an editor for Tsushtayer, in which she worked with Debora Vogel, whom Auerbach encouraged to write in Yiddish, and Rachela Korn. Concomitantly, she was active in the Society of Friends of the Institute for Jewish Research (YIVO) in Lviv; she was a member of its managing body in the early 1930s. She gained the repute of a strong, stubborn woman and an excellent organiser. While living in Lviv, she married Ber Shnaper, one of the editors of Tsushtayer, but the couple eventually divorced.

In 1933, Rachel moved to Warsaw – at the time one of the most important centres of Yiddish culture and language. In the Polish capital, she met Itzik Manger, the rising star of Jewish poetry. Karolina Szymaniak described their relationship as “toxic and full of violence. In 1938, when Rachel is about to undergo surgery to remove a uterine tumour, he gives her hell and probably beats her. The writer feels so traumatised that she is unable to return home after the surgery. It is only after this incident that they part ways. They meet again after the Holocaust. History repeats itself. And this is not the only difficult, complicated, and toxic relationship in Auerbach’s life.”[1.1]

When in Warsaw, Rachel was a member of the Union of Jewish Writers and Journalists in Poland (Polish: Związek Literatów i Dziennikarzy Żydowskich w Polsce) and published in many newspapers and magazines, such as Moment, Haytn, Tog, Naye Folkstaytung, Literarishe Bleter, Nasz Przegląd, Nowy Dziennik, Nowe Słowo, and more. She mostly wrote about Jewish culture, devoting much attention to female artists. She concomitantly worked as a translator. Her Polish translation of Moje miasteczko: ludzie i zwierzęta by Mosze Stawski (1933; originally in Yiddish) had been published while she still lived in Lviv. Three years later, in 1936, she translated Krimer nekht by Zusman Segalovitsh. She had plans to translate Bruno Schulz’s works into Yiddish. Professor Jacek Leociak wrote about her bilingualism as follows: “Two languages were her home. She protected Yiddish, which for her was the essence of Jewish culture. She also wrote in Polish and translated Jewish authors into Polish. She was an author operating in the transcultural area of the borderlands. […] She kept her diary in Polish, but wrote her last will and testament or farewell letter in Yiddish. She lived within both languages.”[1.2])

In September 1939, she lived in Warsaw’s Praga district at 32 Jagiellońska Street.

After the outbreak of the war, Rachel Auerbach decided to stay in Warsaw, giving up the efforts to get a place on the train evacuating journalists from the Polish capital. At the end of September 1939, poet Rajzla Żychlińska introduced her to Emanuel Ringelblum at the headquarters of the Joint in Wielka Street. He informed her that the organisation was seeking to recruit as many Jewish intellectuals as possible in order to “save the staff.” He also pointed out that not everyone could afford to escape from Warsaw. Rachel Auerbach then decided to take over the management of the soup kitchen at 40 Leszno Street.

In mid-1941, Auerbach was recruited by Ringelblum to work in the underground archives of the Warsaw Ghetto. She wrote a paper on the operation of the soup kitchen for the Oneg Shabbat organisation and submitted regular reports on living conditions in the ghetto. Along with Bluma and Hersz Wasser, she was one of the three people associated with Oneg Shabbat who came to survive the Holocaust. Her Letters from the Warsaw Ghetto, preserved in the so-called Ringelblum Archive and published in 2016, are a testimony to that tragic period of Jewish history.

During the first liquidation action in the ghetto (from 22 July to 21 September 1942), both the headquarters of the soup kitchen (at 40 Leszno Street) and Rachel Auerbach's flat (at her relatives’ house at 66 Leszno Street) became an integral part of the complex of Többens und Schultz & Co, a German textile factory. Auerbach became its employee, and was later transferred to the artificial honey and candy factory at 30 Franciszkańska Street. Around the same time, she edited the account of the first escapee from Treblinka, Abram Krzepicki.

She most likely reached the “Aryan side” on 9 March 1943 and assumed the false identity of Aniela Dobrucka (modelled on a Polish peasant from Łanowce – the real Aniela Dobrucka was the youngest daughter of Rachel’s childhood neighbours). Her advantage was her “Aryan appearance” (“a handsome brown-haired woman with big eyes the colour of sea water”[1.3] and her knowledge of German.

She collaborated with the Jewish and Polish underground, with the Jewish National Committee (Polish: Żydowski Komitet Narodowy) and the “Żegota” Council to Aid Jews (Polish: Rada Pomocy Żydom “Żegota”). For some time, she hid in the closed zoo in the Praga district with the help of Jan and Antonina Żabiński. She took part in the Warsaw Uprising and she was expelled from Warsaw after its defeat. Almost her entire family perished in the Holocaust.

She continued to write in the years 1942–1944, though her wartime output was only published after the end of the armed conflict. Among these works were the essays The Weeping of Dead Things (1943, published in Polish in 1946[1.4]) and Lacrimae Rerum (1943, published in Polish in 1949[1.5]), collections of sketches Pesach 1943 or Together with the People (first Polish edition issued in 1948[1.6]), eulogy poem Yizkor, articles Szopomania [Workshop Mania], Conquistadorzy Leszna i Nowolipek [The Conquistadors of Leszno and Nowolipki], and Werterfassung.[1.7]

According to some biographers, Auerbach settled in Łódź after 1945 and started working as a journalist. However, it has been established that she also had an address in Warsaw – 20 Białostocka Street. She was an active member of various associations, including the Union of Jewish Writers, Journalists and Artists (Polish: Związek Żydowskich Pisarzy, Dziennikarzy i Artystów), and cooperated with the Central Jewish Historical Commission (Polish: Centralna Żydowska Komisja Historyczna), whose activities she saw as a continuation of Emanuel Ringelblum’s work. She also strove to recover the entire archive assembled by Ringelblum. Its first part was found on 18 September 1946; it included materials authored by Rachel Auerbach herself, among them her pre-war writings. She participated in the process of organising the priceless contents of the archive. In November 1945, she took part in a site inspection in Treblinka.

In post-war Poland, she published two important books: Oyf di Felder fun Treblinke (Yiddish: In the Fields of Treblinka, Łódź 1947) and Der Yidisher Oyfshtand: Varshe 1943 (Yiddish: The Jewish Uprising in Warsaw 1943, Warszawa 1948). In the late 1940s, she wrote for the Polish Zionist press, including Naye Lebn, Mosty, Przełom, as well as for Robotnik, Opinia, and academic bulletins. She was also a consultant for the film Border Street (1948) directed by Aleksander Ford. For Auerbach, the post-war years were a period of self-reflection. She was asking herself fundamental questions about the meaning of her work and life itself: “And when I am searching for a new raison d'être for myself, when I become too anxious and worried about my miserable existence, it seems to me (or perhaps this is what I tell myself to ease my impure conscience) that I have not the right but the duty to live. And this is because the memory of those who were killed lives in me. And so does the tragedy of their doom – I am a living testimony […]. And that is why I sometimes feel like a pregnant woman who worries and frets about the foetus growing in her womb. But unlike a pregnant woman I am preoccupied not with the future life that I am to bear, but with the past life which has died and whose reflection, whose luminous shadow I wish to preserve in human consciousness, even if only for a short while.”[1.8]

In 1950, Auerbach emigrated to London and later to Israel. She decided to leave Poland because she felt disillusioned with the new system and the lack of “decisive steps to combat violence against Jews.” Once settled in Israel, she took up a job at the nascent Yad Vashem Institute in Jerusalem. In March 1954, she co-founded the department dealing with Holocaust witness accounts. She also conducted research into the history of the Warsaw ghetto and used the innovative method of collecting interviews with witnesses of history by recording them on tape.

In 1961, she prepared materials for the trial of Adolf Eichmann. Together with her colleagues, she provided investigators with evidence, witness lists, summaries, and other documents. She also testified at the trial as a witness. She retired in 1968.

Rachel Auerbach’s writing has been thus described by Aleksandra Ubertowska: “Auerbach’s oeuvre is dominated by ephemeral publications, essays, and short sketches resembling (burning) sheets of paper in the wind, sheets which flitted through Polish literature, leaving a visible, expressive mark, though criminally underappreciated by the domestic literary science.”[1.9] The last period in her writing career produced several historical works and memoirs in Yiddish and Hebrew, including Undzer Kheshbn mitn Daytshn Folk [Our Reckoning With the German People] (1952) and Varshever Tsavoes [Warsaw Testaments] (1974). She also wrote for the Polish-language Nowiny-Kurier magazine. She died of breast cancer.