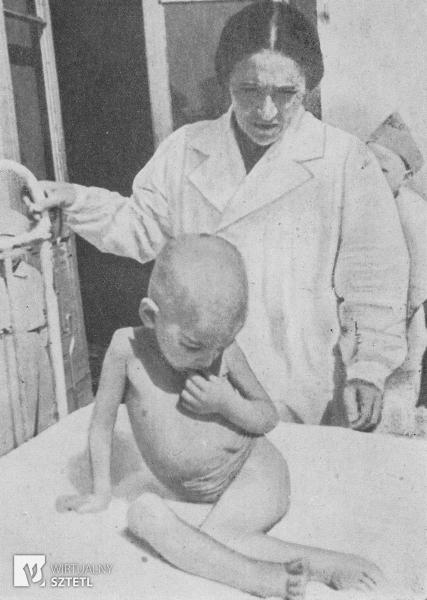 Anna Braude was born in Warsaw, in a traders’ family. She grew up in a religious home, but one open to the world. The family spoke Polish, and much attention was paid to education. She attended the Fryderyka Thalgrün School in Warsaw. After completing the sixth grade she took private lessons, and the high-school certificate she obtained extramurally.

In autumn 1906, she went to study in Geneva. Initially, she studied social sciences, but soon after she moved to Zurich, where she undertook medical studies. In 1912, she obtained her medical diploma in Berlin. She decided to specialize in paediatrics. She left for St. Petersburg to validate her diploma. She passed the exam in difficult conditions, because she was not granted the right to stay in the city. It meant that for four weeks, every night, she had to change her whereabouts. After passing the exam, she began medical practice in a Russian village.

In 1913, she returned to Warsaw, where she started working at the Judaic Hospital in Czyste in the internal ward, and a year later she moved to the Bersohn and Bauman families Children's Hospital at 60 Sienna / 52 Śliska Streets. Since the time of her studies in Switzerland, she had been close to the socialist movement, and belonged to the Bund. She was involved in many social initiatives. In 1916, during World War I, she co-founded the Society of Friends of Children (TPD – Towarzystwo Przyjaciół Dzieci). In 1919, under the auspices of this organization, she founded a school for paediatric nurses. She worked in an outpatient clinic, then as a head doctor in an Educational Centre and in the Care of Mother and Child Facility. At the same time, she was a consultant at the CISZO schools (from Yiddish: Centrale Jidisze Szul Organizations). She was also involved in the establishment of the Włodzimierz Medem sanatorium for children in Otwock near Warsaw.

In 1923, the Bersohn and Bauman families Children's Hospital was closed down. Thanks to Dr Braude-Heller (in 1916, she married engineer Eleazar Heller) engagement, the hospital was taken over by TPD. It remained in its original building. Resulting from Dr Braude-Heller efforts, it received funding from the Jewish community and from the Joint. After refurbishment and modernization, the hospital was opened in 1930. It was then considered one of the most modern paediatric hospitals in Poland. Dr Braude-Heller was its director until its liquidation in the summer of 1942.

In 1940, the hospital was enclosed within the ghetto. It provided help for injured children, those with typhus and suffering from starvation. Dr Braude-Heller was one of the doctors who conducted clinical trials on hunger illness. Her notes on the impact of hunger on children are contained in a book published in 1946 by Emil Apfelbaum Choroba głodowa. Badania kliniczne nad głodem wykonane w getcie warszawskim z roku 1942 (Hunger illness. Clinical Research on hunger conducted in the Warsaw ghetto in 1942). Dr Braude-Heller was the chairwoman of the Judenrat Health Committee.

In the autumn of 1941, during the outbreak of typhoid epidemic, she managed to establish a branch of a hospital in a building on the corner of Leszno and Żelazna Streets. On August 10, 1941, the building at Sienna Street was delineated outside the ghetto and all patients and staff moved to the branch at Leszno Street. On August 13, 1941, the entire hospital was moved to the former school building at Stawki Street. On September 11, 1941, patients and most of the medical personnel were deported by the Germans to the Treblinka II extermination camp. Dr Braude-Heller remained in the ghetto. She rejected the offer of help and escape on the so-called Aryan side. From September 1942 to April 1943, she headed the paediatric hospital at 6/8 Gęsia Street. She perished together with small patients in the basement of the building in the first day of the Warsaw Ghetto Uprising.

After World War II, at the Jewish cemetery at Okopowa Street, on the tombstone of her son and husband, there was inserted a plaque commemorating Dr Braude-Heller. In April 2001, on the wall of the Bersohn and Bauman families Hospital at Sienna 60 / Śliska 51 Streets, a plaque dedicated to this famous doctor and directress of this institution was unveiled.