Home  Vocabulary  T  The Constitution of 3 May 1791 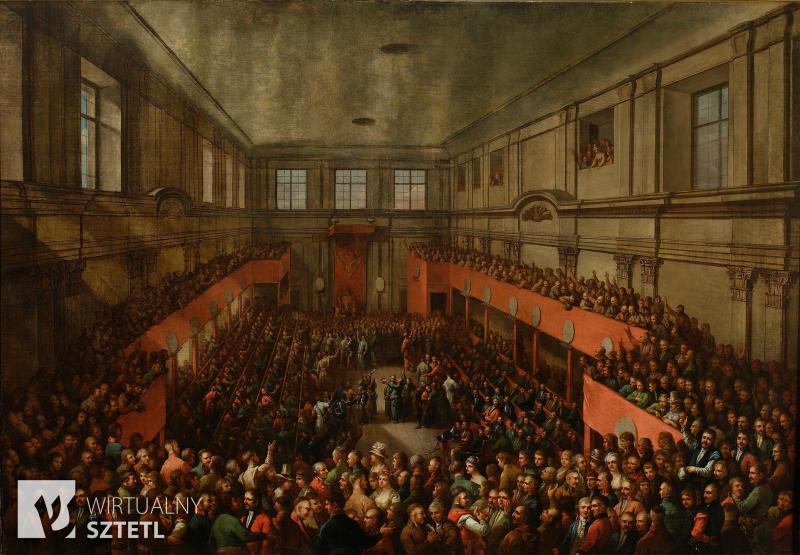 The Constitution of 3 May 1791 – officially referred to as the Governance Act, first in Europe, second in the world (after The Constitution of the United States) Basic law, passed in the atmosphere of a coup d'état on 3 May 1791 by the Four-Year Sejm. Its draft was created thanks to the cooperation from the end of 1790 between Stanisław August Poniatowski and the patriotic party, which gathered a considerable number of deputies to the Sejm. Some of the former anti-royal magnate opposition, the Sejm leadership (Marshal Stanisław Małachowski) and Hugo Kołłątaj, regarded as the leader of the radical wing, were associated with the party. The Constitution was therefore mainly the work of the King, Ignacy Potocki, Scipione Piattole and Kołłątaj. Its final form was influenced by the legal achievements of the European Enlightenment, including the idea of the sovereignty of the nation and the concept of the tripartite separation of powers.

The law on towns of 18 April 1791, by virtue of which the burghers were granted personal inviolability, the right to acquire landed estates, hold lower administrative and judicial offices, attorney positions and officer ranks, was considered an integral part of the Constitution. For the first time in Polish legislation, peasants were taken under government protection, especially with regard to their contracts with heirs. The rights and privileges of the landed nobility were confirmed, thereby limiting the participation in public life of the non-landed nobility, dependent on the magnates interested in maintaining an oligarchic system. The resulting almost total loss of political rights for the masses of the nobility resulted in their dislike of the Constitution and support for the Targowica Confederation. The supreme power was vested in a two-chamber Sejm, where resolutions were to be adopted by a majority vote (the liberum veto right was abolished), and the deputies, free of instructions, were to represent the whole nation, i.e. all the states - apart from the deputies of the nobility, elected at local assemblies, the Chamber of Deputies was to include 24 town plenipotentiaries with an advisory vote. The Sejm was to be "ready", i.e. to meet when necessary with the same composition during the two-year term.

Executive power was entrusted to the Guard of the Laws (Polish: Straż Praw) and the Commissions of Both Nations (Polish: Komisja Obojga Narodów). Amendments to the Constitution were to be introduced by the Constitutional Sejm, which met every 25 years. The Constitution expressed a tendency to centralise and expand the state administration, and was a compromise between the republican programme (improving the work of the Sejm) and the monarchical one (increasing the King's prerogatives). It was supported by the majority of the nobility and the wealthy bourgeoisie, and opposed by a group of malcontents and a considerable part of the petty gentry, who were deprived of most of their previous prerogatives. As far as the social system was concerned, the Constitution left the state system in place, but made some breakthroughs.

The magnates were deprived of their previously decisive influence in the elections, in the Senate, and in the central and territorial government of the country in favour of the middle nobility. Landless nobility was removed from the sejmik assemblies as the most zealous clientele of the magnates. At the same time, the bourgeoisie was ennobled for the acquisition of landed estates, merits in the economic development of the country, public services and the so-called free professions. The burghers in the royal towns declared free were granted personal liberties, the right to hold office, etc. With the consent of the owners, the provisions on royal towns could be extended to private towns. The provisions on towns were, among other things, a response to the postulates presented to the authorities during the so called Black Procession (Polish: Czarna procesja) in 1789.

Very few ad hoc changes were made to the position of the villages and peasants; serfdom was retained, and only foreigners were granted personal freedom. The "protection of the law and the national government" was extended to the peasants in general, in accordance with the programme of Polish Physiocratism. This declaratory provision could have enabled the intervention of judicial and administrative authorities in the future. The constitution called on the nobility and peasants to enter into contracts, which was understood by some peasants as the abolition of feudal subordination. This provided an incentive for peasants to flee to the territories of the Republic, which for Catherine II proved to be one of the pretexts for the war of 1792.

During the Four-Year Sejm, the Jewish question was also raised.  In 1789 in Warsaw, Mateusz Butrymowicz published a brochure, which he entitled Sposób uformowania Żydów polskich w pożytecznych kraiowi obywatelów (English: The Method of Forming Polish Jews into Citizens Useful to the Country). According to the author, Jews should be given religious freedom and allowed to actively participate in all spheres of life. Butrymowicz pointed to Jewish holidays as detrimental to building new social relations, which, according to him, should be abolished. In order to force the Jewish population to polonise, he proposed to introduce a prohibiton on publishing and importing books in Jewish languages, as well as the abolition of separate costumes. According to Hugo Kołłątaj, such forced polonisation was to lead to the gradual entry of Jews into the bourgeoisie. Stanisław Staszic presented a different opinion on the matter. In his work entitled Przestrogi dla Polski (English: Warnings for Poland) published in 1790, he unequivocally rejected the possibility of introducing Jews into Polish society.

Despite the fact that nearly 70% of the Jewish population lived in urban centres, the law on towns passed on 18 April 1791 did not include the followers of Judaism in the bourgeoisie. Also after 3 May the situation of Jews did not change significantly. It only confirmed the protection of the state authority over the Jews. At the same time, De non tolerandis Judaeis "privilege" was still in force in many royal towns. As part of the Four-Year Sejm as early as in 1789, a relevant commission was established, whose aim was to normalize the situation of the Jewish minority in the Republic. Among the members of that commission were Hugo Kołłątaj, Tadeusz Czacki and Mateusz Butrymowicz. On the basis of ideas presented both by members of the committee and representatives of Jewish circles - among them Abraham Hirszowicz and Salomon Polonus - a draft law was submitted on 29 May 1792, entitled Urządzenie ludu żydowskiego w całym narodzie polskim (English: The Organisation of the Jewish People in the Whole Polish Nation). Initially, the opposition of the towns and the majority of the noble deputies, and then the war with Russia prevented it from being adopted.

Organisation draft provided for, among other things, the possibility for Jews to settle in towns provided that appropriate agreements were concluded with the magistrates. On the basis of those agreements, the Jewish population was to be subject to municipal administrative and judicial jurisdiction. Special taxes and Jewish local government institutions with broad fiscal competence would remain unchanged.

Although neither the Constitution of 3 May 1791 itself, nor its extensions ultimately changed anything in the legal position of the Jews, the Basic Law was enthusiastically welcomed by them as an attempt to bring order to political and social life in the Republic.

The authors of the Constitution regarded it as the first step in the implementation of the reform programme. The term nation in the Governance Act functioned in two meanings: the old one, as “nation of the nobility”, when speaking of noble privileges, and the modern one, when referring in particular to universal obligations, to the defence of independence by all citizens. In terms of political institutions, however, the Sejm remained the supreme authority and representative of the supremacy of the nation, with full legislative functions, budget and tax-setting, and far-reaching government control. At the same time, the Sejm was fundamentally reorganised: it was to be made up of 204 deputies, elected at local assemblies by the resident nobility, and 24 so-called town plenipotentiaries – with limited rights.

The role of the Senate was reduced. The Chamber of Deputies was to be elected for two years, thus introducing the principle of a term limit (the so-called finished Sejm). Apart from ordinary sessions, the King or the Marshal of the Sejm could convene the Sejm for extraordinary sessions. Liberum veto was abolished and assembling confederations was prohibited. Government and administration were strengthened and expanded. The principle of succession to the throne was introduced (in the Saxon Wettin dynasty) and the principle that the monarch had no personal liability. The King stood at the head of the government as President of the Guard of the Laws. The position of the King in the Guard of the Laws was similar to that of the President of the United States (being the head of the government), however, in Poland one of the principles of parliamentary government was connected with it – in the form of countersigning royal acts by one of the ministers. Ministers were to be responsible for breaking the law before the Sejm Court, and for the direction of government policy before the King and the Sejm. In this way, Poland was the first country in the world to formulate legally the parliamentary responsibility of ministers. Under the King and the Guard of the Laws remained the great commissions (collegiate ministries) of: education, police, treasury and army. Members of the committees were elected by the Sejm. The administration of the country was vested in civil and military order commissions in the districts, which, apart from the nobility, also comprised the representatives of the towns. The constitution was overthrown in mid-1792 as a result of the formation of the Targowica Confederation and the intervention of Russian army.

A large part of the entry is taken, with the publisher's permission, from the knowledge services of PWN; Encyklopedia PWN, Słowniki języka polskiego and Słowniki obcojęzyczne. Paragraphs concerning the situation of the Jewish population were added.