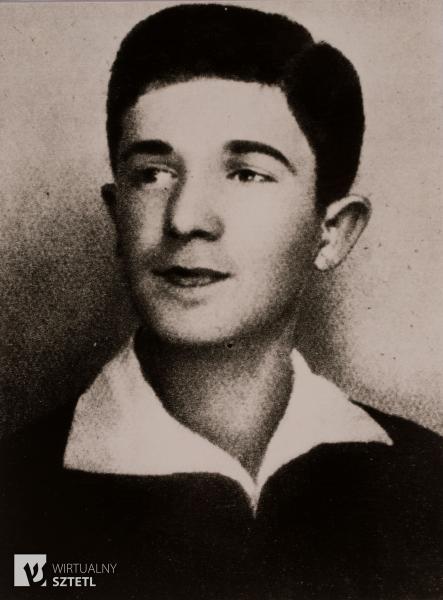 Anielewicz was brought up in Warsaw’s Powiśle district, among the children of Polish paupers. His parents ran a shop at Tamka Street. In 1933, Anielewicz graduated from a seven-grade Tarbut school with Hebrew as the medium of instruction. He then enrolled in the private La-Or (Hebrew: Towards the Light) Men’s Middle School in Nalewki Street. In the same period he was a member of the revisionist Beitar organisation (in the years 1933-1935). He took his maturity exam in 1933. After joining Beitar he acted as a well-known activist of the leftist Zionist HaShomer HaTzair scout organisation; he became a member of its Warsaw branch in 1937 and was appointed to its high command in 1939. He organised self-defence groups fighting against the National Radical Camp. As a representative of HaShomer HaTzair, he established good relations with the Polish Scouting Organisation, which turned out to be beneficial after the outbreak of war in 1939, for example for the members of HaShomer HaTzair in Vilnius.

After the Soviet invasion of Poland (17 September 1939) Anielewicz unsuccessfully attempted to organise a refugee route to Palestine via the Polish-Hungarian border for Jewish youth. He was apprehended on the Soviet border. He then resided in Vilnius, where he attempted to reconstruct the structures of HaShomer HaTzair. He returned to Warsaw in 1940 and started to build the resistance movement in the occupied capital. Together with other members of HaShomer, he established educational and cultural circles and seminars for young people of both sexes. “Mordechaj Anielewicz and Szmuel Bresław were young men distinguished by their astute minds and language. They were both young thinkers, moulded by a Warsaw-based group with a specific ideology” ”[1.1]. Anielewicz and other HaShomer HaTzair instructors travelled around the country and sneaked into ghettos, where they distributed conspiratorial press and encouraged local organisations to engage in underground activities in occupied Poland.

“I met him at the beginning of the war’ he was a young, agreeable 25-year-old man of medium posture, with a long, pale face, pointed chin and long hair. When he approached me, he was wearing a sports outfit. He asked me to borrow him a book. From then on, I would often lend him books on the history of Jews, especially on its economic aspect, which he took great interest in. Who would have guessed that in three years this quiet, modest, nice young man would grow up to be the most influential person in the ghetto, whose name would be uttered either with solemn respect or with fear”[1.2].

Anielewicz was the co-editor of the conspiratorial Neged HaZerem (Hebrew: Against the Current) magazine published in the Warsaw Ghetto. He used his alias to sign his articles: “M–i” (Malachi).

The Anti-Fascist Bloc was created in the Warsaw Ghetto in the spring of 1942; Anielewicz was its co-founder and member. During the so-called Great Action in the summer of 1942, Anielewicz was not present in the ghetto – he was in the area of Zagłębie. He returned to Warsaw in September 1942, after 300,000 Jews had been deported to the Nazi extermination camp Treblinka II. He became a member of the command of the Jewish Combat Organisation and assumed the post of the organisation’s commandant in November 1942. On 18 January 1943, during another deportation campaign, Anielewicz instigated the first armed resistance operation in the ghetto. He actively participated in combat, fighting on the corner of Niska and Zamenhofa streets. He and other HaShomer activists regretted focusing on education and theoretical issues instead of armament and combat against the occupant.

As emphasised by Emanuel Ringelblum, Anielewicz was extremely devoted to his organisation. “He would go through fire for any of his companions”[1.3]. He was one of those commanders who not only command but also actively participate in fighting. During the war, he and other HaShomer members mostly talked about honorable and dignified death. They did not give much importance to living a long life, which was a worldview criticised by pre-war Bund member Abrasz Blum. They did not think about the things to come. This was emphasised by both Emanuel Ringelblum and Marek Edelman.

During the Warsaw Ghetto Uprising, Anielewicz coordinated the fights as the commandant of the Jewish Combat Organisation. He resided in the bunker at 18 Miła Street together with other members of the organisation’s command. From there, he wrote two letters to Icchak Cukierman, who lived on the Aryan side during the uprising.  The letter written on 23 April includes his famous words:

“Only few will persevere. The rest will sooner or later be killed.  Their fate is sealed. [...] The most important thing is: My life’s dream has been fulfilled. I have lived to see Jewish self-defence in the Warsaw Ghetto in all its splendour and glory”[1.4].

Anielewicz died in the bunker on 8 May 1943. He most probably committed suicide to avoid being captured by the enemy (nowadays, a stone commemorating the death of Anielewicz and other members of the Jewish Combat Organisation is located at the site of the bunker; the stone is a part of the so-called Jewish Memorial Route). Among the people who died together with Anielewicz there were other members of the command of the Jewish Combat Organisations and his girlfriend Mira Fuchrer (Fuchter; 1920–1943) – an activist of HaShomer HaTzair and an active participant of the uprising. Their suicide was both lauded and criticised by insurgents who survived the uprising. Years later, Marek Edelman said:

“I do not think it’s right that Anielewicz committed suicide. He should have fought until the very end. Or try something else, for example escape. […] He [Jurek Wilner] and ‘Marian’ had the following philosophy: “The nation dies and so do its soldiers.’ It is a beautiful motto. A beautiful legend… But it is better to live, even if it’s sometimes harder ”[1.5].

Members of the Jewish Combat Organisation – led out through the ghetto’s sewage system on 28/29 April and 10 May – formed a partisan unit in the area of Wyszków and gave it the name of Mordechaj Anielewicz (it was later renamed to Obrońców Getta [Defenders of the Ghetto]). He is also commemorated with a monument in a kibbutz located in the northern part of the Gaza Strip, which also bears his name – Yad Anielewicz. The former Gęsia Street in Warsaw has been renamed to Mordechaj Anielewicz Street. The site of his house in Wyszków (the locality where he was born) has been commemorated as well, with a monument dedicated to Anielewicz with inscriptions in Polish, Hebrew, and English. One of the departments of the Institute of History at the University of Warsaw is called the Mordechai Anielewicz Centre for the Study and Teaching of the History and Culture of Jews in Poland.