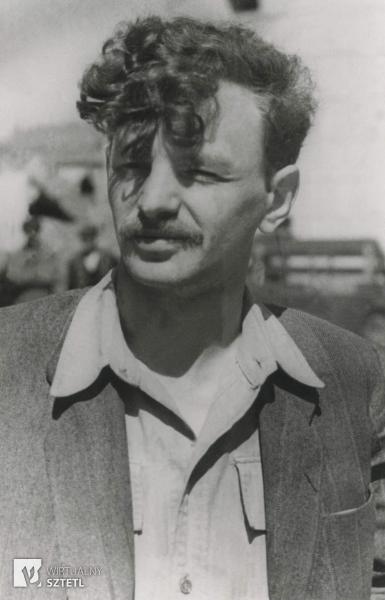 Cukierman Icchak, alias Antek (1915, Vilnius – 1981, Kibbutz Lohamei HaGeta’ot [Hebrew: Ghetto Fighters’ Kibbutz]) – Zionist, activist of HeHalutz, member of Dror, co-founder and one of the leaders of the Jewish Combat Organisation (ŻOB) in the Warsaw Ghetto, participant of the Warsaw Uprising in 1944; husband of Cywia Lubetkin (1914–1978); co-founder of the Ghetto Fighters’ Kibbutz in Galilee.

Cukierman grew up and was educated in Vilnius. He completed the Ezra religious elementary school, strongly influenced by the Mizrachi organization, with Yiddish as the language of instruction. In 1933, he graduated from a Hebrew secondary school. He was fluent in three languages: Polish, Yiddish, and Hebrew. He was associated with the Zionist movement since early age. As a teenager, he was active in the Zionist youth movement, including HeHalutz (Hebrew: “Pioneer”) and HeHalutz HaTzair (Hebrew: “Young Pioneer”). After graduating from secondary school, he applied to the University of Vilnius and sent his documents to the Hebrew University in Jerusalem, where he was accepted. However, he did not take up his studies. In Vilnius, he joined the kibbutz at Subocz Street and founded a small unit of HeHalutz HaTzair. In 1936, he was sent by the HeHalutz authorities to Warsaw, where he received training for future pioneers (Hebrew: hachshara) on a farm in Grochów near Warsaw. He later lived in a commune at 34 Dzielna Street in Warsaw. In 1937, he became a member of the Central Committee of HeHalutz HaTzair, and in 1938 he became the Secretary General (one of two) of the merged Dror–Halutz.

When war broke out, Cukierman was in Klevan, a village near Rivne, Volynha, where he was co-organising seminars of HeHalutz HaTzair and of the unified movement Freiheit–HeHalutz HaTzair (Yiddish: “Freedom” – Hebrew: “Young Pioneer”). From Klevan, he escaped to his native Vilnius. The organisation authorities ordered him to go to Kovel and Lutsk, where he was to lay the foundations of underground HeHalutz movement in the Polish lands occupied by the Soviet Union. On 25 December 1939, he left Lutsk and eventually, having illegally crossed the border, he came to Warsaw in April 1940. Following the orders of HeHalutz leaders, he began to form an underground movement under German occupation.

Cukierman became one of the leaders of the underground in the Warsaw Ghetto. “A tireless organiser, working in many fields: in the formation of the organisation, in shaping its elite executive bodies, in the establishment of underground press and training system (including seminars and a regular schools), in preparing young members of HeHalutz for future activity in Palestine[1.1].”

After his return to Warsaw, Cukierman co-organised transit to Palestine, eventually halted by the outbreak of the Soviet-German war on 22 June 1941. The transit point was located in Bardejov, Slovakia. In order to verify the situation on the spot, he took two trips to Nowy Sącz. During his travels, he used documents issued in the names of: Antek Wilczyński, Stanisław Bagniewski, and Witold Kimstaczas. In the spring of 1940, during the Jewish holiday of Passover, he was taken to a labour camp in the Kampinos Forest for a week, where he worked on draining swamps.

Cukierman was a member of the Anti-Fascist Bloc, formed in March 1942. After the beginning of the so-called Grossaktion in the Warsaw Ghetto in July 1942, covert activities in the Jewish quarter took on a different character. In addition to cultural and educational efforts and providing material support for the inhabitants of the closed district, the underground organisations started to consider armed opposition against the policy of the occupant. For this purpose, the Jewish Combat Organisation (ŻOB) was established. Cukierman was its co-founder and member of the staff. He also participated in the formation of the Jewish National Committee (ŻKN). On 18 January 1943, when the Germans organised another deportation of Jews from the ghetto, the ŻOB put up armed resistance. Cukierman took part in the fights as the commander of the unit stationed at Zamenhofa Street, Miła Street, and Stawki Street. From January to April 1943, he was the commander of one of the three sectors of the ghetto delineated by the ŻOB.

In 13 April 1943, following the arrest of Arie Wilner, Cukierman moved to the so-called “Aryan side” of the town as a representative of the ŻOB. His task was to restore communication with the executive centres of the Polish underground. He did not return to the ghetto during the uprising, he remained the commander of the ŻOB on the Aryan side. When Zalman Frydrych alias “Zygmunt” (member of the Bund and the ŻOB) and Kazik Ratajzer (Symcha Ratajzer-Rotem alias “Kazik,” member of the ŻOB and the Akiva political organisation) escaped from the ghetto, Cukierman helped them organise a transfer of a group of fighters from the ghetto. They were taken to the woods in the vicinity of Łomianki.

After the fall of the Ghetto Uprising, Cukierman remained in Warsaw and helped in the rescue of Jewish survivors. Together with other fighters who survived the uprising, he was involved in the activities of the National Jewish Committee (ŻKN). He edited underground reports sent to Western countries. Thanks to the transfer channels of the Home Army, Cukierman’s report on the activities of the ŻOB, written in March 1944, was transferred to London in May. When the Warsaw Uprising broke out in August 1944, Cukierman became the commander of a ŻOB unit fighting in the ranks of the People’s Army. They fought in the areas of the Old Town and the district of Żoliborz.

After the liberation of Warsaw in January 1945, Cukierman and his wife Cywia took part in the reconstruction of the Zionist movement. Together with other members of HeHalutz, they settled in the building at 58 Poznańska Street (they called this place the Kibbutz at Poznańska). They both became members of the Bureau of the Central Committee of Jews in Poland (Polish: Centralny Komitet Żydów w Polsce). Cukierman, together with Adolf Berman, petitioned to the Polish authorities to allow Jews to legally migrate to Palestine. He also participated in the organisation of illegal migration from Poland to Palestine, the so-called Bricha (Hebrew: “Escape”). He left Poland in the early spring of 1947.

In 1949, Cukierman and his wife became the co-founders of the Ghetto Fighters’ Kibbutz (Hebrew: Beit Lohamei HaGeta’ot) in Galilee and the Yitzhak Katzenelson Ghetto Fighters’ Museum, where the outbreak of the Warsaw Ghetto Uprising is commemorated every year on 19 April. The goal of the museum is to preserve the memory of the Holocaust and the heroism of Jews for future generations.

In 1961, Cukierman was called as a witness in Adolf Eichmann’s trial in Jerusalem. He described his wartime experiences in the book A Surplus of Memory: Chronicle of the Warsaw Ghetto Uprising.

Years later, he was thus recalled by Marek Edelman, his friend from the days of living in the Warsaw Ghetto and fighting in the ranks of ŻOB:

“He had the soul of a poet. At night he would tell us stories. He would make them up himself. (...) He knew by heart all the poems by Isaac Leib Peretz (...) and half of the poems by Juliusz Słowacki. He valued them equally. (...) After the uprising in the ghetto, he would lay down on the bed in our conspiratorial apartment at Komitetowa Street in Warsaw, regardless of the circumstances, and would recite poems to calm us down with his beautiful voice. He would recite Anhelli [narrative poem by Słowacki] or poems by Peretz in Yiddish.

He was a romantic. He wrote letters to his friends in concentration camps. He used them to smuggle some information, but otherwise his letters were full of romance, flowers, love. Girls would go crazy for him. He was extremely handsome. He had an outstanding sense of beauty. He did not like to talk about current events, but about people. (...) He liked to laugh. He told jokes from remote Borderland provinces. They were rather stupid, but somehow they made us laugh. He liked people. He felt uncomfortable only when he had to shoot. In his view, shooting was a sad necessity, not a good thing[1.2].”