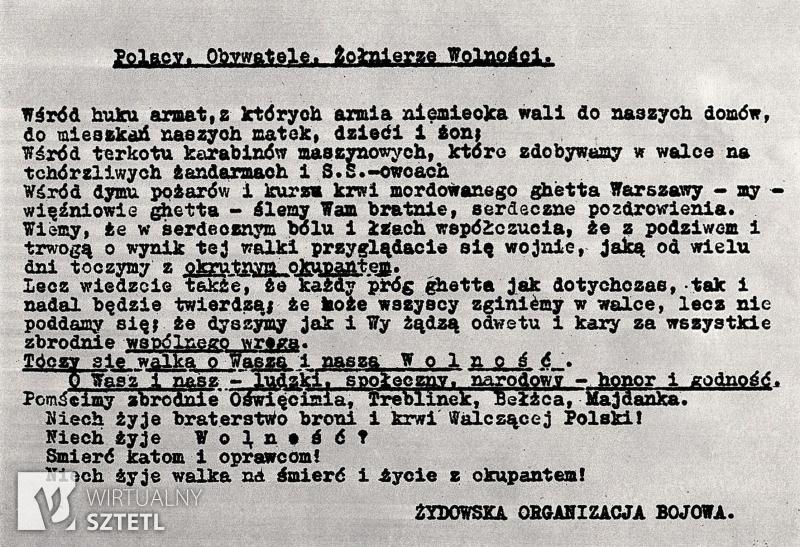 ŻOB cells were also founded in ghettos in Białystok, Będzin, Częstochowa, Kraków, and Sosnowiec. The decision to establish the ŻOB was made after the beginning of the Grossaktion. It was founded by activists of Zionist youth organisations – Dror (Icchak Cukierman, Cywia Lubetkin, Mordechaj Tenenbaum), HaShomer HaTzair (Szmuel Bresław, Arie Wilner, Josef Kapłan), and Akiba (Izrael Kanał). Even though the arsenal of the ŻOB only included one handgun, as early as 20 August Israel Kanał made a failed attempt to assassinate the commandant of the Jewish Order Service, Józef Szeryński; ŻOB insurgents also set fire to German warehouses. At the beginning of September, the ŻOB lost all of its collected munition (five pistols and eight grenades) in a blunder and practically ceased all operations. Its reactivation in a new formula took place in mid-October 1942, after Mordechaj Anielewicz returned to Warsaw and became the commander of the organisation. All political forces operating in the ghetto joined the expanded ŻOB, apart from the Revisionist Zionists and Betar, their youth organisation (which formed the Jewish Military Union – ŻZW), as well as religious groups, which rejected the idea of armed struggle. The ŻOB command was composed of: Mordechaj Anielewicz (HaShomer HaTzair), Icchak Cukierman (Dror), Berek Sznajdmil (the Bund, later replaced by Marek Edelman), Jochanan Morgenstern (Poale Zion-Right) Hersz Berliński (Polae Zion-Left), Michał Rozenfeld (Polish Workers’ Party). At the end of 1942, the ŻOB had ca. 500 members, all of whom kept their affiliations to their original organisations. The ŻOB enjoyed political support from the Jewish National Committee (ŻKN – Żydowski Komitet Narodowy), established at the request of the authorities of the Polish Underground State as the political representation of the Jewish community. As the Bund refused to join the ŻKN due to the ideological differences with Zionist parties and the Polish Workers’ Party, a Coordinating Commission was also established as a platform of cooperation between the ŻKN and the Bund.

In the autumn of 1942, Arie (Jurek) Wilner – ŻOB envoy outside the ghetto walls – managed to establish contact with the Home Army authorities, which officially approved the activities of the Jewish organisation. At the turn of 1943, the Home Army handed over 20 pistols in two batches, a recipe for incendiary bottles, and military instructions to the ŻOB. The goal of the ŻOB was armed resistance in the event of future deportation campaigns, as well as terrorist operations against the Jewish police and collaborators, combat traitors, and Gestapo agents. Some of the victims of the ŻOB were the deputy commander of the Jewish Police, Jakub Lejkin (29 October 1942), police officers Israel First (29 November 1942) and Mieczysław Brzeziński (26 February 1943), as well as artist Alfred Nossig (22 February 1943), suspected of collaborating with the Gestapo. On 18 January 1943, when Germans unexpectedly entered the ghetto to deport 8,000 people, the ŻOB managed to put up spontaneous resistance. The resulting battle – which came to be known as the January Self-defence – lasted five days. It was the first direct armed battle on the streets of occupied Warsaw. It led to a breakthrough in the mentality of the Jewish community, showing that armed resistance against Germans was possible. It ultimately strengthened the authority of the Jewish Combat Organisation among the ghetto population. Over the following months, the ŻOB was intensively preparing for large-scale armed struggle. Weapons were collected, incendiary bottles and grenades were made, military training was carried out, interior passages between buildings and tunnels leading outside the ghetto wall were dug out, traitors and collaborators were being assassinated, prisoners were rescued, expropriation actions (robbery raids) were carried out and contributions were imposed on the wealthy in order to gain financial resources. As a result of these activities, the ŻOB, commonly referred to as the ‘party’, became the de facto ghetto administrator, imposing its authority on the Judenrat. At its call, the ghetto population started to build shelters and hiding places, the so-called bunkers. During the last weeks before the Warsaw Ghetto Uprising, the ŻOB remained on combat alert, with its fighters organised into 22 combat groups of 10–12 people each.

The area of the ghetto was divided into three sectors: the central ghetto – nine battle groups under the command of Izrael Kanał; the area of Többens and Schultz’s shops – eight battle groups under the command of Elizer Geller; and the brushmakers’ shop – five battle groups under the command of Marek Edelman. The ŻOB headquarters was located at 29 Miła Street. Even though the ŻOB received another 50 guns from the Home Army after January 1943, most of its weapons were bought on the black market. These were almost exclusively handguns and grenades; the organisation had only 10 rifles and perhaps one machine gun. On 19 April 1943, fighters of the ŻOB and the ŻZW put up resistance against German forces entering the ghetto. The fiercest battles took place near the ghetto gate at the intersection of Nalewki and Gęsia streets, at Zamenhofa Street and at Muranowski Square, where the headquarters of the ŻZW was located. On the following day, battles began in the area of Többens and Schultz’s shops and the brushmakers’ shop. After a few days of organised skirmishes, the defence of the ghetto, systematically set on fire by Germans, took the form of resistance in isolated buildings and bunkers. On 8 May 1943, Mordechaj Anielewicz and several dozen fighters, having been surrounded by Germans, committed suicide in a bunker at 18 Miła Street. With the help of the People’s Guard (GL – Gwardia Ludowa), several dozen ŻOB fighters managed to get out of the ghetto; on 29 April and 10 May, two groups of ŻOB members, ca. 40 people each, reached the ‘Aryan side’ through the sewers. Survivors were led to the Wyszków forests, where they formed partisan units. However, they were broken up after a few months and most of their members were killed. After the Ghetto Uprising, Icchak Cukierman became the commander of the ŻOB. He tried to organise help for his companions remaining in Warsaw. An unsuccessful attempt was made to create a Jewish combat unit within the Home Army. An independent ŻOB platoon under the command of Cukierman fought in the ranks of the People’s Army during the 1944 Warsaw Uprising, taking part in battles in the Old Town and the district of Żoliborz. According to the findings of Anka Grupińska, 31 ŻOB members who had taken part in the Warsaw Ghetto Uprising survived the war.