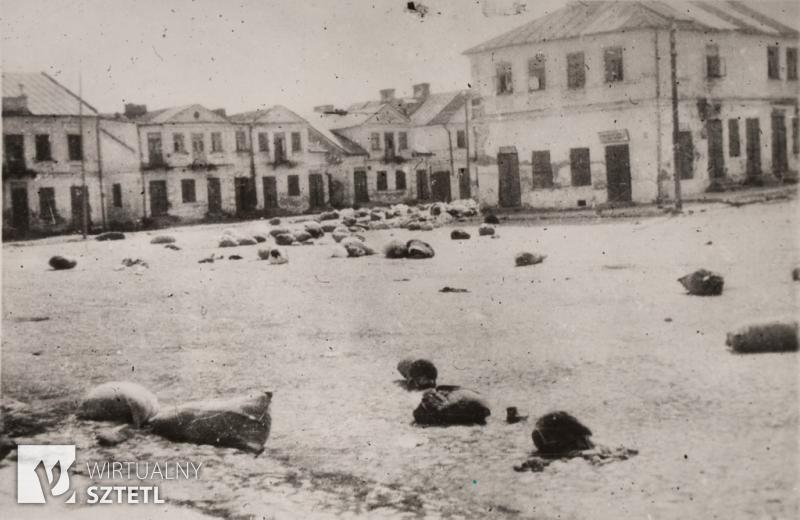 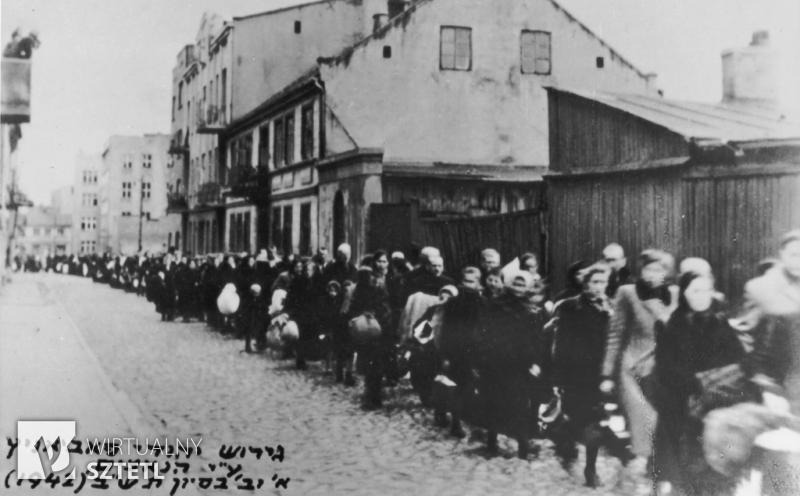 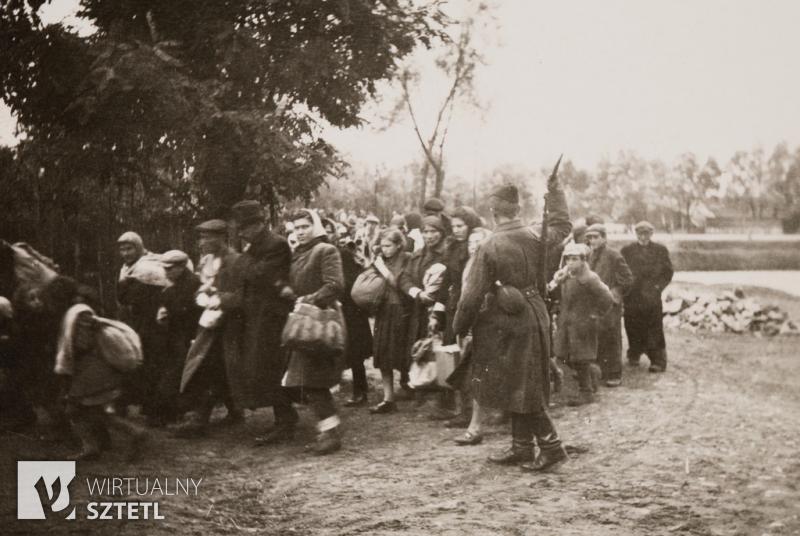 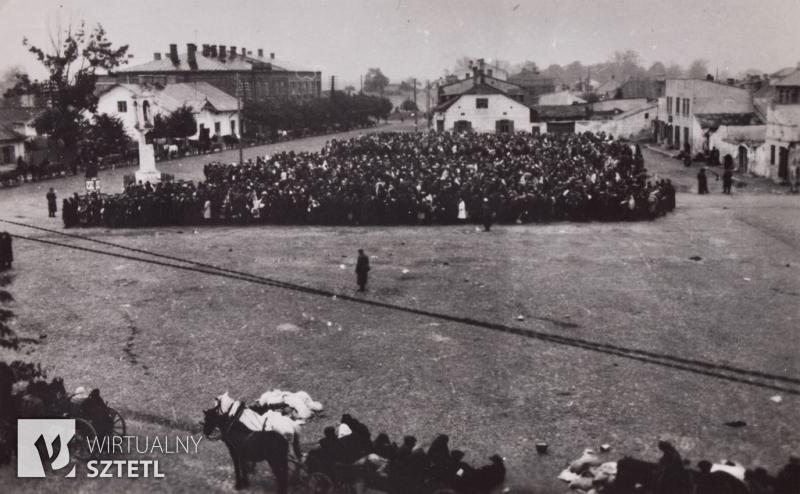 On the night of 16-17 March 1942, the Germans began the deportation of Jews from the Lublin ghetto to the Bełżec death camp. At the same time, they started deporting the Jews of Lviv there as well. This was the beginning of an operation to murder the Jewish population of the five districts of the General Government (Warsaw, Radom, Kraków, Lublin and Galicia). At the end of 1942, the action was extended to the Białystok district, which had been incorporated into East Prussia.

The decision to murder all European Jews was made in the autumn of 1941. In order to coordinate the activities of the various segments of the Third Reich state apparatus, a conference was held at Wannsee in Berlin on 20 January 1942. Josef Bühler, the representative of Governor-General Hans Frank, demanded at this meeting that the "final solution of the Jewish question" start with the territory of the General Government. Heinrich Himmler appointed Odilo Globocnik, head of the SS and police in Lublin, to execute this task. It was also the headquarters of the operation, which was given the codename "Reinhardt", most likely in honour of Reinhard Heydrich, the head of the Reich Security Main Office. The name of the operation appears in documents as both "Reinhardt" and "Reinhard". Adolf Eichmann supervised the action on its part.

In order to carry out this criminal plan, the Germans employed SS men who had previously been involved in Operation T4 (murder of the disabled persons). Its head, Christian Wirth, oversaw the operation of the extermination camps set up specifically for Operation Reinhardt, where death was inflicted in the gas chambers. The camp in Bełżec operated from March to December 1942 (liquidated in April 1943), in Sobibór – from May 1942 to October 1943, and Treblinka II – from July 1942 to August 1943 (liquidated in November 1943). Over 1.5 million lives were murdered in these three camps alone. The victims of Operation Reinhardt were also murdered in concentration and the Majdanek extermination camp.

From the beginning of December 1941 there was the Kulmhof extermination camp in Chełmno nad Nerem where the Germans murdered the Jewish population of the Reichsgau Wartheland. In the spring of 1942, they began the systematic liquidation of Jewish communities in the General Government. This meant not only the deportation of ghetto prisoners to death camps, which took place under inhumane conditions, but also mass murders and executions on the spot. In small towns, where the ghettos were not strictly isolated, this happened in front of the local, Polish population.

German Operation Reinhardt personnel were relatively few in number. It consisted of 450 SS-men and over 1,000 auxiliary service members recruited from among captured Red Army soldiers (mostly Ukrainians, Latvians and Russian Germans). They were trained at the Trawniki camp in the Lublin region and were also used as guards in the death camps. In the absence of people to help in deportation operations and to participate in raids on fugitives, the Germans mobilised local forces, especially blue policemen, sometimes firemen or construction service juniors (Baudienst). In the larger ghettos, they shifted responsibility for supplying contingents of people for the supposed "evacuation to work in the East" to the Jewish Councils and the Jewish Order Service.

The displacement actions were coordinated by the Chief of Staff of Operation Reinhardt, Hermann Höfle. The largest took place in the Warsaw Ghetto, from where the Germans deported more than 250,000 people to Treblinka over a period of two months (22 July to 21 September 1942).

The economic dimension of Operation Reinhardt also mattered to the Third Reich. Globocnik's staff included more than 150 labour camps for Jews. The looting of property belonging to the murdered also brought in huge profits. According to Globocnik's final report, its value was 179 million marks after deducting the 12 million marks of the operation costs. The murder of Jews also provided an opportunity for individual looting. It was material abuse that was the reason for Globocnik's dismissal in August 1943.

Despite resistance from the war industry benefiting from the slave labour of the Jews, the priority for the SS was to complete the "final solution". After the prisoner revolts at Treblinka (2 August 1943) and Sobibór (14 October 1943), Globocnik's successor, Jakob Sporrenberg, carried out, on Himmler's personal orders action under the code name "Erntefest" ("Harvest Festival"). On November 3–4, 1943, the Germans executed 42,000 prisoners in the Majdanek, Trawniki and Poniatowa death camps.

In total, during Operation Reinhardt, in the course of 18 months – from 17 March 1942 to 4 November 1943 – the Germans murdered around 2 million Jews. Most were killed before the end of 1942 (already in the summer of that year, Himmler ordered the completion of the "deportation" of Jews from the General Government by 31 December). Among the victims were also more than 100,000. Jews from France, the Netherlands, Germany, Austria, the Czech Republic and Slovakia, as well as Bulgarian-occupied Macedonia and Thrace, whom the Germans deported to Sobibór, Bełżec and Treblinka.

Of the main organisers of the "Reinhardt” action, only Jakob Sporrenberg was held responsible for the crimes he committed. Arrested by the British, he was handed over to Poland, sentenced to death by a court in Warsaw and executed in 1952. Globocnik, who had been transferred from Lublin to become SS and police commander in Trieste, made his way to his native Carinthia in the last days of the war. Shortly after being detained by the British, he committed suicide by biting through a cyanide capsule. Hermann Höfle fell into Allied hands together with Globocnik, but was released after two years. Upon hearing of the Polish extradition request, he fled to Italy. Arrested again in Austria in 1961, he hanged himself in a Vienna prison before being brought to trial. Wirth, who also ended up in Trieste after Operation Reinhardt, was killed by Yugoslav partisans in 1944.