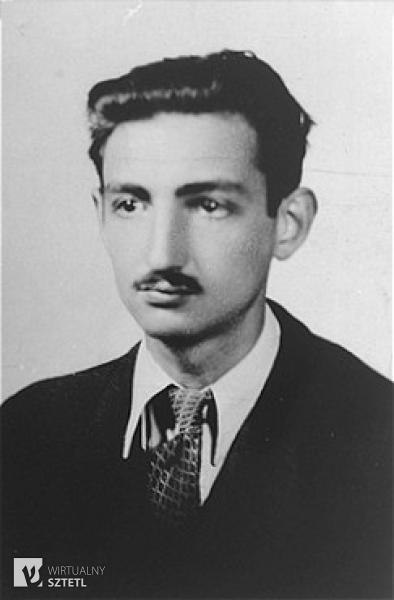 Edelman Marek, alias “Marek” (probably 1 January 1919 in Gomel – 2 October 2009 in Warsaw) – one of the leaders of the Warsaw Ghetto Uprising, cardiologist, Polish social and political activist of Jewish descent.

In his youth, Marek Edelman was a member of the “Tsukunft” (Yiddish: “Future”) Jugnt Bund, a youth organisation operating under the auspices of the Bund. During WWII, he continued to participate in underground activities of the Tsukunft. He worked at the Bersohn and Bauman Children’s Hospital; he also edited and published underground press in the Warsaw Ghetto. He was one of the commanders of the Jewish Combat Organisation (Polish: Żydowska Organizacja Bojowa, ŻOB). During the Warsaw Ghetto Uprising, he commanded fighter units in the area of the so-called brush-makers’ shop. After the death of Mordechaj Anielewicz, Edelman was appointed chief commander of the uprising. On 9 May 1943, he escaped from the ghetto together with other fighters through the municipal sewage system. He took part in the Warsaw Uprising, joining a ŻOB unit within the People’s Army. He participated in fights taking place in the districts of the Old Town and Żoliborz. Edelman stayed in Poland after the war. He settled in Łódź, where he worked as a cardiologist. He was an active member of the opposition movement under the communist Polish People’s Republic. He was awarded the title of the Knight of the Order of the White Eagle in 1998. He was also presented with the Medal of St. George honorary award (1999) and received the Legion of Honour from the President of France (2008). He held four honorary doctorate titles from Yale University (USA, 1989), Université Libre in Brussels, the Medical University of Łódź (2007), and the Jagiellonian University in Kraków (2009). In 1999, he was named the Resident of the Year in Łódź. Edelman was an author of a memoir and various historical accounts. He was buried at the Jewish cemetery at Okopowa Street in Warsaw, in close vicinity to the graves of other members of the Bund. Until the end of his life, he was a social activist fighting for the rights of the weak and disenfranchised. He emphasised the importance of freedom in the life of every human being.

Edelman was born in Gomel, Belarus, most likely on 1 January 1919. This date was featured in his documents issued right after the war, e.g. in the 1946 registration card of the Central Committee of Jews in Poland (Polish: Centralny Komitet Żydów w Polsce). Other documents contain different dates of birth: 1921, 1922, and even 1924. According to some secondary sources, he was born in Warsaw, not in Gomel. Edelman himself would often say that it held no importance[1.1].

When he was a small child, he moved to Warsaw with his parents. Soon afterwards, his father Felix died; Edelman hardly remembered him. He was left with his mother, Cecylia. From an early age, he was involved in the activities of Jewish socialists. In his postwar biographies, printed in the press organs of the Bund and the Tsukunft shortly after WWII, it was emphasised that “Marek was a child from a Bundist home”[1.2] and that he was weaned on love for socialism[1.3], with his mother serving as the secretary of JAF (Yiddish Arbeter Froy – “Jewish Working Woman”), a women’s organisation affiliated with the Bund. When Edelman’s mother died (c. 1934), Bundists essentially became a stepfamily for the 13-year-old boy, which had a significant impact on his upbringing. His teachers had a similar leftist background – Edelman attended a school ran by the CISZO (Zentrale Yiddishe Shul Organizatsye – “Central Jewish School Organisations”). His schoolmates were also children of Bund activists. Together with the offspring of Jewish socialists, he went to summer camps organised by the SKIF (Sotsyalistisher Kinder Farband – “Socialist Children’s Union”), a children’s organisation affiliated with the Tsukunft. When he contracted tuberculosis, he was sent to the Vladimir Medem Sanatorium in Miedzeszyn near Warsaw, a facility run by the Bund. This also had an impact on his development in the spirit of socialism. Before the war he personally met Bund leaders Wiktor Alter and Henryk Erlich. Shortly before the outbreak of WWII, in the spring of 1939, he completed his secondary education.

When the war broke out, Edelman stayed in Warsaw and worked at a children’s hospital. Thanks to that, he was granted a pass to the “Aryan side” after the creation of the ghetto. This enabled him to contact Bundists hiding outside the ghetto and exchange information between the Jewish quarter and other parts of Warsaw. He was one of the editors of the underground press published by the Tsukunft. After the “resettlement to the East,” he became one of the leaders of the newly formed Jewish Combat Organisation (ŻOB). He took part in the Warsaw Ghetto Uprising as a member of the ŻOB command and the commander of five units in the area of the so-called brush-makers’ shop. He then moved four units into the area of the central ghetto. On 9 May 1943, together with other insurgents, he managed to escape through the sewage system and reached the Aryan side through a manhole at Prosta Street in the district of Wola. From there, the group was loaded on a truck and taken to the Łomianki forest. Edelman was one of the few survivors of the Ghetto Uprising. He went into hiding with the help of underground activists of the Polish Socialist Party (Polish: Polska Partia Socjalistyczna, PPS). He participated in the 1944 Warsaw Uprising, fighting in the area of the Old Town and Żoliborz as a member of the ŻOB unit of the People’s Army.

After the war, Edelman initially roamed around the country in search of other Bundists, wishing to rebuild the party structures. At the time, he started to write the memoir Ghetto Walczy (The Ghetto is Fighting), which was first published in 1945 by the Central Committee of the Bund. In the book, he described his wartime experiences from the war and the Ghetto Uprising. The publication received wide coverage, it was soon translated into other languages and published abroad.

It is uncertain when exactly Edelman permanently moved to Łódź and started to be closely involved in the activities of the local Tsukunft organisation. He became a member of the Central Tsukunft Committee in Łódź. He represented the organisation at international socialist youth conferences. Many years later, he told the authors of the book Marek Edelman. Life that he did not join the national authorities of the party because he believed that there was no point of reviving the Jewish Bund in Poland as there was no longer any Jewish proletariat. The same book features a photograph entitled “Members of Bund authorities after the war” – one of them is Edelman. He talked with Antek Cukierman about his decision to retire from political activity. Apparently, during a Bundist meeting in post-war Poland, Edelman reacted to the proposal to revive the Bund with a snappy comment: "Comrades, enough of this splashing about in urine!”[1.4]. In 1948, he almost pounced on Salo Fiszgrund (Secretary of the Central Bund Committee) upon hearing the news of the self-dissolution of the Bund.

In 1951, Edelman graduated from medical school in Łódź and began working as a cardiologist. He married Alina Margolis and had two children, Aleksander and Anna. He did not leave Poland even after 1968, when his wife and children migrated abroad in the aftermath of a country-wide anti-Semitic campaign. He was unable to receive habilitation due to his Jewish descent. This is how he explained his decision to stay in Poland: “I decided to stay. After all, someone had to stay with all those who had died”[1.5]. He spent the last two years of his life in Warsaw.

In 1971, he introduced a revolutionary heart disease treatment to Poland, involving the combination of venous circulation with blood circulation. From the beginning of the 1970s, he was associated with the Nikolay Pirogov Hospital in Łódź.

In the mid-1970s, he became involved in the activities of the opposition movement, collaborating with the Workers’ Defence Committee (Polish: Komitet Obrony Robotników, KOR). He joined the Independent Self-Governing Labour Union “Solidarity” (Polish: Niezależny Samorządny Związek Zawodowy, NSZZ) in the early 1980s. In 1989, he participated in the meetings of the Round Table.

Throughout his life, he spoke out on behalf of the weak and disenfranchised. He fought for human dignity and freedom, as he repeatedly pointed out in oral and written statements. An example of his activity was an appeal to stop air strikes on Kosovo, addressed to the leaders of NATO and published in major European newspapers in April 1999. Edelman accompanied the humanitarian convoy sent to Sarajevo.

He used his words and actions to remind the society at large of the tragedy of Jews murdered during World War II. He spoke on their behalf and honoured their memory. He continued to perform his duty as a guardian of the graves of the fallen even after 1949, when the Bund ceased to exist and most of its activists migrated from Poland.

Every year until his death, Edelman visited the Monument to the Ghetto Heroes on 19 April and paid homage to his fallen comrades. He talked about the Ghetto Uprising in his memoirs written shortly after the war, in the interviews conducted by, among others, Hanna Krall, Włodek Goldkorn and Rudi Assuntino, Anka Grupińska, Witold Bereś and Krzysztof Burnetko, and in numerous films. This helped preserve the memory of the insurgents and the Jewish Bund. Perhaps his insistence to remind the world about the Bund was an act of defiance against Zionists from the Lohamei HaGeta'ot (“Ghetto Fighters”) kibbutz, who marginalised the role of the Bund in the Warsaw Ghetto, or maybe he did it out of his fondness for and emotional attachment to the Bund? Until the end of his life, Edelman claimed that “Zionism is a lost cause. It was back then and it is now”[1.6].

On 3 October 2011, Marek Edelman’s Office was opened at the Museum of the City of Łódź. Two museum rooms are dedicated to his memory. The first room is a copy of one of the rooms from Marek and Alina Edelman’s apartment in Łódź, the other contains mostly photographs taken throughout Edelman’s life.

On 7 April 2013, artist Dariusz Paczkowski (associated with the anti-fascist association “Never Again”) painted a mural depicting Edelman holding a yellow daffodil in his hand on the wall of the building at 9b Nowolipki Street in Warsaw, located on the ruins of the ghetto. The mural was unveiled to commemorate the 70th anniversary of the Warsaw Ghetto Uprising and the figure of Marek Edelman.